The Lowdown: A new twist for FC Kansas City 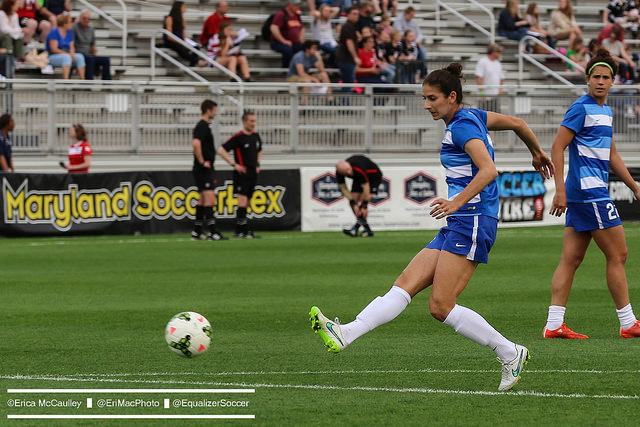 Yael Averbuch stepped into an unfamiliar defensive role last weekend, but she didn’t miss a beat as FC Kansas City rolled past the Houston Dash. (Photo Copyright Erica McCaulley for The Equalizer)

The lineup sheet suggested FC Kansas City were only using three defenders. The eye test suggested differently. Vlatko Andonovski, who said he was looking for a way to deal with the 4-3-3 formation favored by the Dash in the same week he was adjusting to life without his World Cup players, said it was a bit of a hybrid.

“We didn’t play with the classic three-back and five or six in front,” Andonovski explained. “We actually played with two center backs where Yael (Averbuch) was more of, I don’t want to say, the old fashioned sweeper because she was never sweeping behind the line, she was only sweeping in front. And Amy LePeilbet was more of a marking back.”

Much of the time Averbuch looked like the right-sided center back, but she could also be seen often tracking back to that spot from above the back line. LePeilbet looked as if she was always glued to a Dash attacker. Jen Buczkowski remained in her usual role, playing defensive midfield and had her second consecutive quality match. The defense was far from perfect, but it was enough to land the Blues a second consecutive clean sheet—the first time a team has done that this season.

“It’s something that we just tried. We always have some ideas,” Andonovski said before offering one of his familiar refrains. “Sometimes it works for the team and sometimes it doesn’t.”

In this case, the 2013 NWSL Coach of the Year gave much of the credit to Averbuch and LePeilbet, both fixtures on the pro scene since 2009 and both capped many times over by the national team.

“They are both very intelligent players and understood the role very well and executed it very well,” he said. “Especially playing against the 4-3-3, we had to come up with something to neutralize those three forwards. We knew if someone could do that, it would have to be the most experienced players who are not going to fold under pressure. They are not going to get stressed out or be nervous because they have different roles in the game.

Andonovski said in the system, his outside backs—Leigh Ann Robinson and Rebecca Moros—needed to be slightly more conservative. However it also allowed midfield players like Frances Silva to get more space and play in the wide areas of the field. And broadly speaking, the Blues received attacking contributions from several depth players who will likely need to do more of the same in the time before the World Cup players get back to the team.

“The offensive part was very similar to what we did against Seattle and we tried to mirror that,” Andonovski said. “It seems like it worked and we scored a couple of really nice goals. And the goals and the assists came from the people we needed them to come (from). Hopefully we’ll have some more in the next games when the national team players are not here.”

Liz Bogus and Shea Groom scored the goals—Groom’s first as a pro—and Sarah Hagen had a gorgeous assist on Groom’s header.

The player of the day though was LePeilbet, once a U.S. national team regular and now seemingly screaming out for a chance at the Olympic roster next summer.

“When we got Amy we knew we were taking a risk,” Andonovski said, noting that LePeilbet missed all of 2013 and part of 2014 recovering from knee surgery. “She plays the game absolutely with no mistakes. I think that every game she is getting better and better and she is looking like the form from when she was in the national team. When she steps on the field it is a clear difference in the level between her and some of the other players that she competes against.”

Flash midfield: The Western New York Flash midfield is going to be very good. Becky Edwards’ goal last weekend carried her to NWSL Player of the Week honors, but rookies Abby Dahlkemper and Sam Mewis are also playing at a high level. Mewis scored her first pro goal in the 3-1 victory over the Breakers and Dahlkemper was outstanding and chipped in an assist. Factor in the blazing speed up top, particularly once Sydney Leroux gets back from the World Cup and Lynn Williams joins the club full-time, and this will be a team no one will want to see come late summer. And allowing only two goals to the Thorns and Breakers after being run off the pitch by the Reign in the opener is a compliment to the team and head coach Aaran Lines.

Where is Nadia Nadim? The Nadim Novelty has clearly worn off. Opposing defenses are swarming her with defenders, and her teammates’ inability to get her the ball in dangerous positions is sinking Sky Blue’s ability to score. They are the only club not to have a two-goal game this season, and they must find a way to move the ball through midfield if they are going to do so on a regular basis. On a positive note, Taylor Lytle started in her first match in 51 weeks and looked decent—and more importantly healthy.

Kim Little: My Player of the Week vote was a force in midfield for the Reign and when she touches the ball, her club almost always winds up in a stronger position after than before. Little set up two goals on Saturday. She slipped into space on the right flank and caught a mismatch against Christine Nairn, around whom she easily crossed to Merritt Mathias. Later she played a sweet, one-touch pass to Jess Fishlock for a goal. The 3-1 win over the Spirit improved the Reign to 2-2-0 and snapped a rare, two-match losing streak.

Boston Breakers at Chicago Red Stars (Saturday, 5 p.m. EDT) – The Red Stars finish out a season-opening stretch of four matches at home, this one at Toyota Park as part of a doubleheader against the Chicago Fire.

Seattle Reign FC at Sky Blue FC (Saturday, 7 p.m. EDT) – The Reign have lost both of their away matches this season and are actually 1-4-1 outside Seattle dating back to July 12.

Washington Spirit at Portland Thorns FC (Saturday, 10 p.m. EDT) – The Spirit complete the Pacific Northwest double against a Thorns club that is fresh after a week off but sans several national team players.

Several of you have indicated a preference for seeing the attendance numbers posted here each week.  I got the message and will begin posting them next week with analysis only every few weeks.  Appreciate the feedback as always.

— Stephanie Ochs has a torn ACL and will miss the rest of the season. Ochs had played in the first 49 NWSL matches for which she was eligible—22 for the Spirit and 27 for the Dash.

— While Ochs missed the Dash match, the beat rolled on for FC Kansas City’s Jen Buczkowski, who is the only player standing of the 110 who played Week 1 of 2013.  Buczkowski has played 50 consecutive matches–all starts–for FC Kansas City.  Only once has she been taken out of a match–June 7, 2014 when she played 62 minutes against the Breakers.  (Buczkowski also played the full 45 in a rain shortened match last August, also against the Breakers.

— The bill to fund a soccer stadium for NASL side Indy Eleven died in the Indiana legislature last week, scuttling chances for an NWSL side to launch and share the stadium. Indy Eleven president Peter Wilt said an NWSL team was directly tied to the stadium and that it is pushed back by at least a year. That makes 2018 the earliest starting point for a team in Indianapolis.

— Jodie Taylor underwent right knee surgery last week and is expected to miss three weeks. That takes her away from the Thorns through the World Cup but she is expected to recover in time to be part of England’s team in Canada.

-Crystal Dunn will not miss any NWSL matches as yet although she will be spending the next two weeks training with the U.S. national team instead of the Spirit.  Dunn was called in as insurance after Tobin Heath injured her hamstring.  Heath is expected to be out at least through the two upcoming friendlies.

-Not sure I have seen a player take a shot, hit her teammate in the face, get the ball back, and take another shot that went in.  But that’s how Danielle Colaprico’s first professional goal went down in the Red Stars’ 1-0 win over Sky Blue.

-Sky Blue likely would have taken Colaprico at No. 10 had the Red Stars not acquired the pick via trade with the Breakers and grabbed her with the No. 9 pick—and last of the 1st round.

-Does anyone who watches NWSL and Major League Soccer on a regular basis not think NWSL has put out a better product so far in 2015?