Brian ushering in next generation for USWNT

BOSTON — There aren’t many 22-year-olds who like being called “kid.” And while it’s probably not the first moniker she would lavish upon herself as a two-time Hermann Trophy winner who has excelled on every soccer field she’s ever stepped foot on in her career, Morgan Brian will live with it for now.

“I think I’ve experienced being the kid on a lot of teams, even on the youth national teams, I was on the U-17s when I was 15, so I’ve been there quite a bit in my past,” Brian said. “At the same time when Mia Hamm, (Julie) Foudy, and (Kristine) Lilly were playing, it was kind of a different age. Now there’s not many young players on the national team, and it’s very hard to break in. There’s so much talent, and I like the experience because I do learn a lot from the players that have been with the national team for a while.”

So while host Canada will likely start 19-year-old Kadeisha Buchanan at center back in this summer’s World Cup (and has two other teenagers on its roster) and Australia may have up to 10 players her age or younger in Canada, Brian remains the youngest of the 23 United States players trying to win its first World Cup title since 1999. 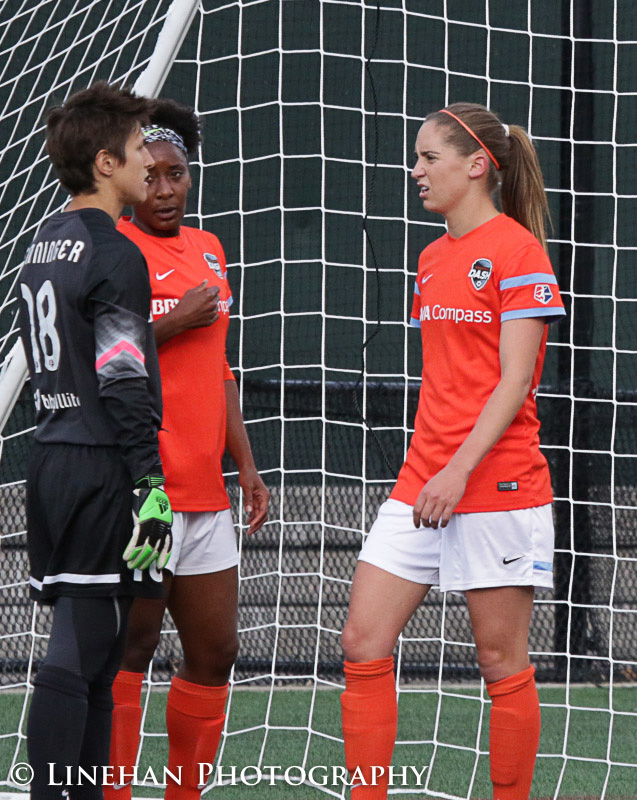 Morgan Brian (right) is already settling in to life in the National Women’s Soccer League. (Photo Copyright Clark Linehan for The Equalizer)

By the time they were 22, Hamm, Foudy, and Lilly had a combined two decades of experience on the national team, including a victory in the 1991 World Cup, but it’s unfair to say that the veteran movement with the national team is a recent phenomenon. In fact, the last teenager to appear on a U.S. World Cup roster was Tiffany Roberts in 1995. (Lorrie Fair, Cat Reddick, Stephanie Lopez and Alex Morgan were the youngest on the last four World Cup squads, respectively; all were 20 or 21 at the time.)

Recently, Greg Ryan and Pia Sundhage have pushed the median age even higher, and although Tom Sermanni looked set to incorporate more young blood, he was out of a job before he really even got going. Jill Ellis had a chance to bring in a few younger players, but – at 25 – Alex Morgan remains the fourth-youngest player on this World Cup roster (Julie Johnston and Sydney Leroux are between Brian and Morgan). Randy Waldrum is now Brian’s coach with the Houston Dash in the NWSL, but someone who has plenty of experience coaching U.S. youth teams, including a couple with Brian in the midfield.

“When you look at the history of our national team over the last decade, it seems like they go longer and longer with some players,” Waldrum said. “Maybe our coaches over the years haven’t integrated enough young players along the way to help build up. Probably over the last two World Cup cycles, I think we’ve missed some good young kids.”

Fortunately for her, Brian’s talents have been too great to overlook, although her spot in the starting lineup at the World Cup is not quite set in stone. Ellis has played Brian in the midfield with Lauren Holiday and Carli Lloyd for the past couple of friendlies, and seeing how the coaching staff integrates Brian and where (along with who pairs with Alex Morgan at striker) will be one of the lineup questions to keep an eye on in the games leading up to the World Cup. None of the three of Brian, Holiday and Lloyd is a natural holding midfielder, but Ellis sees what Waldrum does.

“Morgan is a part of this younger generation coming in,” said on a conference call in January. “She’s adapted very quickly, she’s got a wonderful skill set, she’s a very mature young lady and I see her as a pivotal part of our team moving forward.”

Brian doesn’t have the speed of Alex Morgan, the athleticism of Sydney Leroux, or the aerial prowess of Abby Wambach. In fact, she’s far from an intimidating physical presence on the field, but don’t let her frame or smile fool you. Brian has had coaches gushing since she was young because she represents the changing of the guard, an American player among the most technical in the world that also has all the mental tools to not only be one of the best, but lead others there as well.

“I think she’s going to be the future of the women’s national team,” Waldrum said. “I’m not trying to put pressure on her, but I think she’s just got some intangibles that most players don’t have. You can see how comfortable she is in close quarters and tight spaces. I think the biggest thing that impresses me is that her soccer IQ is off the charts compared to other players. She can see the game one or two passes ahead of everyone else. That’s a gift of hers that’s very uncommon to see in American players. She uses her body really well, and she’ll still get bigger and stronger as she matures a little bit. But she doesn’t get beat a lot on balls in the air or knocked off the ball a lot. She’s certainly not afraid of the contact. Even though she’s a little slight, she’s tough.”

It is those qualities that have gotten her on the field at the national team level, even while most of the girls she played with growing up have had to wait for the current generation to depart. Eventually, we’ll likely see Brian in a more attacking role with the national team, after all, she scored 71 goals in one SEASON at her high school in Georgia (Brian speaks with very little accent despite having grown up there on tiny St. Simon’s Island, about halfway between Savannah and Jacksonville) and tallied 26 goals and 28 assists in her final two seasons at the University of Virginia. 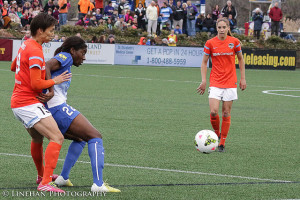 Morgan Brian was the No. 1 draft pick in 2015. (Photo Copyright Clark Linehan for The Equalizer)

For this cycle, though, Brian has adapted to a holding midfield role that the team needs her in, playing a key role in an area that has been a big problem for the United States against top teams like Japan, France and Germany in recent years in big games: keeping the ball.

“I’m just happy to be on the national team,” Brian said. “I would love for all the girls that I played with on the youth national teams to be with me, but you make new friends, meet older people, and I’m just glad to put on the uniform.”

Brian currently has 26 caps with the full U.S. national team, has played in all seven games in 2015 (starting six), and was the top pick in last winter’s NWSL draft. While people inside the game and diehard national team fans certainly know her and her potential, Brian does not yet have the star appeal of some of her teammates on the national team. But there are few people involved with women’s soccer either at the collegiate or national levels who doubt that it’s coming sooner rather than later.

“Once she bursts on the scene with the national team and is playing regularly, people are really going to fall in love with her,” Waldrum said. “She’s a special talent.”

For the next couple of months, though, Brian will focus on something that hasn’t happened since she was 7 years old: winning a World Cup title for the United States. And if she has to be a “kid” to do it, she’s more than happy to play whatever role is necessary to lift that trophy.

“I think at this point in time, our mindset has to change,” Brian said. “Instead of fighting for a spot, this is the World Cup team. So for now, you’re not trying to fight for a spot, you’ve made the team so you want to help the team the best way that you can. Everyone has to start turning their mind over to, ‘How can I help the team instead of fighting for spots?’ For us to win a World Cup, we have to be the best team out there.”