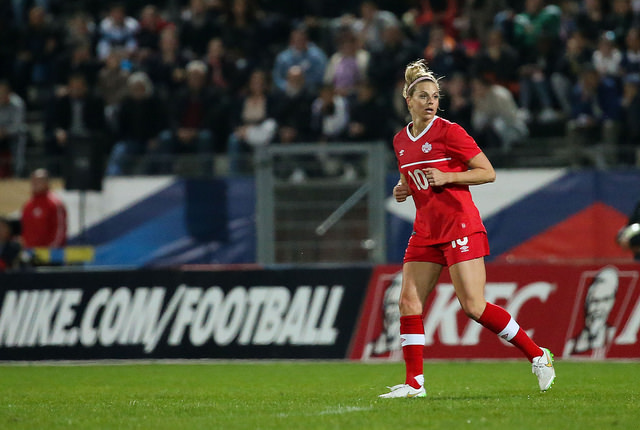 Defender Lauren Sesselmann returned to the field for Canada against France on April 9 after a year out due to a torn ACL. (Photo: Canada Soccer)

VANCOUVER, British Columbia – In the past year, Canada’s back-four has had a lot of different players come in and look to form chemistry as a solid defensive unit. Lauren Sesselmann’s ACL tear at the 2014 Cyprus Cup opened the door for a possible replacement if need be.

Fast-forward 13 months later and Sesselmann has arrived back into full training and nearly match fitness as she prepares to help anchor the core part of Canada’s defense at the 2015 Women’s World Cup. Sesselmann is one of the 23 players that Canada coach John Herdman selected on Monday to be on his World Cup team.

Sesselmann, 31, says she always knew she was going to return in time for the World Cup, saying she “wasn’t going to let anybody down.”

“I think it has a little bit of a ways to go, but I’m feeling confident,” she said. “I’ve been having some games under my belt and as they continue this next month, it’s going to be in tip-top shape when it needs to be. You’ve got to take it as a slow process when you’re getting back into it. I’ve only been training for about a month so it can only go up and I’m excited to see it.”

Apprehension and nervousness are to be expected for a player returning from injury, especially when called upon to make an important tackle. It can take a while for timing and familiarity to return, but Sesselmann doesn’t feel that this is something she is missing on the pitch.

“Actually not at all,” she said. “The injury happened just on a freak step when I stepped wrong so it didn’t happen in a tackle. I think that is very beneficial for me. I haven’t hesitated at all, it’s just getting those little movements back. I’ve already been tackling in the games that we’ve had so far and I’m not scared of that at all. My physical ability is what makes me the player that I am so I can’t be scared.”

During her extended time away from the Canadian national team, Sesselmann leaned on teammate Desiree Scott for positive influence and an encouragement. Scott — Canada’s “Destroyer,” as she is known — always supports Sesselmann.

“I love having her back,” Scott said. “I think it’s a phenomenal job that she’s done over the last year. It’s not easy to come back from an ACL injury. Sometimes you feel alone, it’s a grueling process of rehab and working to get back on this team. I was sending her texts like, ‘keep going girl’ and she’s done it. I’m beyond proud for her.”

Before each and every Canada match both players like to get pumped up with music, an inspirational quote or even an impromptu dance. The “Bone Crusher” and “Destroyer” make up the heart of the Canadian defensive unit, as a center back and defensive midfielder, respectively.

“In the locker room before we come out, it’s like the ‘Bone Crusher’ and ‘The Destroyer,'” Scott says. “We just say, Bone Crusher, Destroyer let’s go! We just get ourselves vibed up before the match and we pound it and we go out there. I know if I don’t make a tackle she’s right there behind me to clean up things.”

Sesselmann will make her home debut with the Houston Dash on Saturday against FC Kansas City. She says she is fit, excited and improving each and every day.

“I feel it’s 100 percent. I feel great,” Sesselmann said. “I’ve had an amazing staff and support system behind me all the way through. Everyday I’m doing better, and better.”