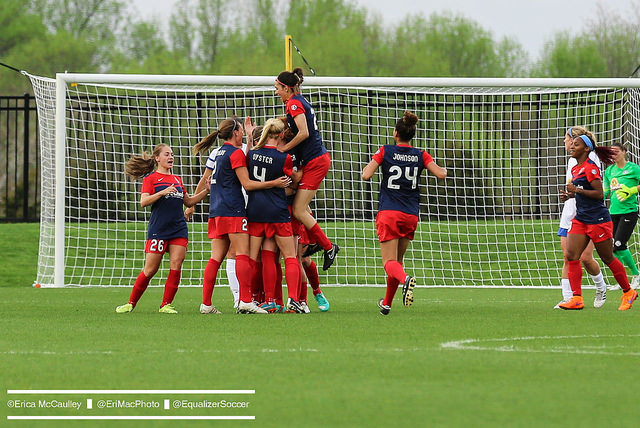 The Washington Spirit continue to show improvement in 2015 after a huge turnaround in 2014. (Photo Copyright Erica McCaulley for The Equalizer)

Mark Parsons was asked before Sunday’s match about the Spirit’s 0-5-2 record against Sky Blue FC. He shrugged off the stat and insisted the team was just focused on what it would take to win the match at hand. But after they won, the Spirit head coach wore a wide smile.

“I’ve wanted to beat them for so long,” he said grinning.

These are good times for the Washington Spirit. Dunn scored two goals Sunday and Christine Nairn added another, giving the duo three goals apiece over the last two matches, both 3-1 victories. On Sunday, the Spirit introduced another player into their starting lineup, Francisca Ordega. The 21-year-old Nigerian striker was a factor in both halves of the field with two assists and some disruptive energy defending high against Sky Blue’s back four and goalkeeper, Brittany Cameron. It was Dunn who took the ball from Kristin Grubka, leading to the first Spirit goal, but it was Ordega’s recognition that allowed to her to swoop in and play a quick give-and-go with Dunn, who finished in the 6th minute.

“She’s special,” Parsons said of Ordega, who will be leaving in a few weeks to play in the World Cup.

Another thing that makes the Spirit dangerous is Dunn. Free of injury worries and having to play in back, Dunn is showing the league why the Spirit picked her first overall in 2014.

“I love it. I tell everybody,” Dunn said, “I was always a midfielder at heart. To me it’s natural. Getting the ball and facing up is something that I feel like I was kind of born with.”

That said, Dunn — who was recently left off the United States’ World Cup roster — said whether or not she scores is not paramount to feeling like she contributes on a given night.

“I don’t really go into these games thinking I have to score to have a great performance,” Dunn said. “My role on this team is I guess to cause havoc. I really enjoy playing my role and the team works great around me and I work hard for the team.”

Dunn texted Parsons after finding out she did not make the World Cup roster and Parsons replied, telling Dunn that he turned down multiple offers from teams looking to trade up and take her No. 1 in 2014 and that she was still held in as high a regard as she was on draft day. But the U.S.’ loss in the Spirit’s gain, and with Ali Krieger missing the last two games with a concussion, the only significant loss will be goalkeeper Ashlyn Harris (Ordega will eventually go as well).

“This is our World Cup team really,” he said. “We lose Ashlyn, which is big but we’re so excited and happy with Kelsey (Wys). We’ve beaten two teams (Sky Blue and FC Kansas City) who lose major, key players. Ali not being available has been hard to deal with, but our back four were fantastic.”

Next up is a trip to Seattle to face the Reign, another club that will take a minimal World Cup hit. The Spirit played there twice last August and fell short both times. First was a tight, 1-1 draw in their penultimate regular season match. And two weeks later a gut-wrenching playoff loss that came agonizingly close to going the Spirit’s way.

“Talking about beating Sky Blue, we don’t need to bring up that stuff, but I really wanted it,” Parsons said. “It’s a psychological thing that now we’ve broken through. And now it’s the same thing about Seattle. The motivation is nothing because they’re ready, they’re chomping. We’ve only got a small number that were there that night, but the girls that joined us, the first thing they said is they were watching and we could have had them.

“Seattle deserved it, they got the goals. But we had them on the ropes and we didn’t quite finish them off.”

The Reign will enter the match having lost two straight matches for the first time since 2013. As for the Spirit, their upward arc since the end of what was a disastrous 2013 for them as well, is evident.

“I don’t have to stand in front of the team and say ‘you’re as good as anyone in this league,’” Parsons said. “These results show that. We have to keep improving. This should have been a clean sheet and we should have gotten four of five. So we’ve got areas we have to improve.”

— Breakers win: The Breakers christened Soldiers Field with an exciting, 3-2 win over the Dash for their first victory of the season. They were numbers up in midfield and used it to their advantage, often stifling the Dash attack before it had a chance to build up. Kristie Mewis enjoyed a particularly strong, two-way match in midfield. The Breakers still conceded twice and needed a few strong saves from Alyssa Naeher to keep it at two (Naeher did make a mistake on the second Dash goal), but unlike their opening match in Portland were often the team on the front foot. They are still vulnerable at both outside back spots so keeping up the aggressive play in midfield will be key going forward.

— Reign on losing skid: The Reign dropped a 1-0 decision in Kansas City on Thursday and are on a losing streak for the first time since they dropped their final four matches in 2013. In this one they were rarely able to penetrate Jen Buczkowski who had a nice bounce back match in defensive midfield even while losing her partner to a shape change. The Reign also allowed Amy Rodriguez behind their defense too often and she burned them for one goal that proved to be the difference. On the flipside, the Blues won for the first time and after being under siege midway through the 2nd half, steadied the ship to see the match out with some strong, late possession.

— Thorns hold it together: Maybe a year ago, the Thorns would have given it up, but Saturday in Chicago they shook off two early Christen Press goals and fought back to earn a 2-2 draw. The final moments were all Thorns as they pushed for the equalizer. Paul Riley elected to stick with his 3-6-1 and Press feasted on it for the first 20 minutes until the Thorns figured some things out. Tireless work from Sinead Farrelly, Tobin Heath, and McCall Zerboni helped keep pressure off the back three and eventually turned the play in the Thorns’ favor.

Sky Blue FC at Chicago Red Stars (Saturday, 6pm EDT) – The Red Stars play their third of four straight at home to open their campaign. Christen Press has four goals in two matches and will be playing her pre-World Cup swan song while Sky Blue’s U.S. players will already be departed.

Boston Breakers at Western New York Flash (Saturday, 7pm EDT) – The Flash begin the post-Abby Wambach era in their usual spot as the final NWSL side to open at home. They were outscored 6-1 in two losses out west while the Breakers exit their first win of the season.

FC Kansas City at Houston Dash (Saturday, 8:30 pm) – Two of the hardest hit teams by the World Cup exodus will meet in the Lone Star State. The Dash will have their Canadian trio available for the match.

Washington Spirit at Seattle Reign FC (Saturday, 10:30 pm) – The Reign return to the home field they have never lost on but riding a two-match losing streak and facing the side that nearly upset them in the 2014 semifinals.

— Cat Whitehill has bruised ribs and missed the Breakers’ home opener, snapping her streak of consecutive starts at 47 since the opening of the NWSL. It leaves Jen Buczkowki and Stephanie Ochs having played every match, but Ochs left the Dash game in Boston with a knee injury and is likely to see that streak snapped. If Buczkowski plays Saturday in Houston it will be her 50th consecutive regular season start for FC Kansas City.

— As of midday Tuesday, there was no definitive word on the extent of Stephanie Ochs’ injury. Knee contusion was the initial word from the club. She had an MRI on Tuesday.

— At the other side is Hayley Haagsma. The No. 15 pick in the 2014 draft finally made her NWSL debut when she came on as a reserve for Sky Blue on Saturday. Haagsma tore her ACL last preseason and dealt with other nagging injuries as her recovery came to an end. “It’s a dream come true. It makes me feel like all the hard work I did last season and in the offseason finally paid off. I was just happy to be out here and do what I could.” Haagsma’s role will no doubt increase with Christie Rampone and Kelley O’Hara headed to the World Cup.

— Sky Blue could also have Taylor Lytle back in the lineup this weekend. Lytle has not played since breaking her leg last Mother’s Day.

— Carli Lloyd’s own goal on Saturday makes her first player with two own goals in NWSL play.

— Mark Parsons pulled Tori Huster out of training 20 minutes early one day last week and told her after Saturday’s match that she played so well because of the extra rest. Huster replied that she would have been even better with the 20 aditional minutes of training. Either way, Huster was spectacular in midfield for the Spirit on Saturday and seems to be settling in nicely in her role as a full-time mid.

— Soldiers Field looks like a solid venue for the Breakers. Look for attendance to go up as the season moves forward.

— Three weeks in and while it hasn’t been perfect by any means, does anyone notice how little anyone is discussing NWSL referees so far?