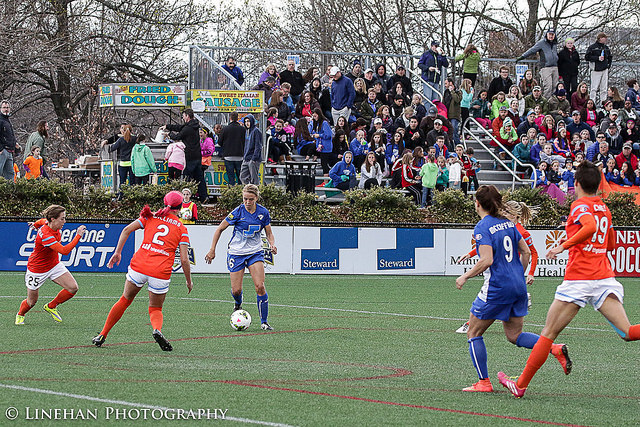 The Boston Breakers pulled the surprise of Week 3 with a 3-2 win over the Houston Dash. (Photo Copyright Clark Linehan for The Equalizer)

The first midweek game of the season was a tactical war of attrition in a rematch of the 2014 NWSL Championship, while the Breakers surprised for their first win and Crystal Dunn and Christen Press took over the show.

We told you last week that Crystal Dunn is finding herself in the NWSL after being cut from the U.S. national team’s World Cup roster. Apparently, that is happening quicker than expected. Dunn scored twice and was influential in a third goal for the Spirit on Sunday, easily staking her place as the best player on the field and showing she’s healthy again (she might be the fastest player in the NWSL). How Dunn isn’t going to the World Cup seems more and more a mystery, but it is Washington’s gain.

Press made quick work of the Thorns’ unconventional 3-6-1 formation, shredding Courtney Niemiec twice in the opening eight minutes to give the Red Stars an early 2-0 lead. As much as Jill Ellis likes to play Press on the wing — where Press is more than capable and Ellis likely sees it as a way to get the best 11 players on the field, since Press is the best on the wing of the forwards — Press showed Saturday why she should be playing striker. Press is only 18 months removed from winning the golden boot in Sweden and she has four goals in two NWSL games this year. She also recently diced up France’s backup defense. Press will be extremely influential for the U.S. at the World Cup.

One day somebody will write a book about the story of Vlatko Andonovski, a man who had never before coached a women’s team but put together the best team over the first two seasons of the NWSL, all while still coaching men’s professional indoor soccer. On Thursday, his FC Kansas City side got the better of Seattle Reign FC again in a rematch of the 2014 title game that Kansas City won. The Blues clamped down on Seattle’s dangerous midfield, keeping 2014 MVP Kim Little at bay and largely limiting the Reign in the best 1-0 game you’ll see for a while. This match was the definition of the cliche ‘chess match’ where two like teams look to gain small amounts of ground on each other. Amy Rodriguez’s goal just after halftime stood up as the winner.

Parity digging its heels in already

We’re only three weeks into the season, but the league which many like to tout as the best in the world from top to bottom is already proving to be filled with parity. All but one team — the idle Western New York Flash — have claimed points thus far and only Portland and Chicago remain unbeaten after drawing on Saturday. Washington’s big win over Sky Blue FC came as a slight surprise, while the Breakers’ 3-2 victory over a previously very impressive Houston team was the surprise of the week. The Flash, Breakers and Red Stars will still have their U.S. players on Saturday (the rest of the teams will not, since U.S. players are all being given three NWSL games each before training camp) and then the chaos of two-plus months without national team players will break out.

Sure, the weather wasn’t great this week. But Sky Blue FC reported an embarrassing attendance figure of 753 fans after a terrible number for their opener, which came on a glorious, warm and sunny Saturday evening. Chicago pulled in 2,136 fans and Boston drew 2,376 fans. Not the best weekend at the gate for the NWSL.

Breakers hold off Dash for first win of season
The Lowdown: Good times abound for Spirit