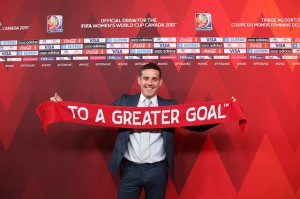 Midfielder Diana Matheson and defender Lauren Sesselmann are both on Canada’s 23-player roster for the World Cup, which coach John Herdman announced on Monday.

Both players have been recovering from torn left ACL injuries. Sesselmann recently played a match in the NWSL for the first time since 2013, but Matheson is farther out and still a concern for the World Cup, which begins on June 6. Matheson broke a metatarsal in her right foot while recovering from a torn ACL sustained in October.

Canada’s roster also includes 17-year-old midfielder Jessie Fleming, who last year played in both the U-17 and U-20 World Cups.

“Today marks the culmination of three years of dedicated work from the team and we are pleased with the final selection,” Herdman said. “After the Olympics, we challenged the players to shed an old skin and strive to be even better as a team, and as individuals. They all committed wholeheartedly to this vision and competition for each position was fierce. Ultimately, we feel that this group of 23 makes us the best team we can be across our four corners of the game. They fully deserve this honor.”