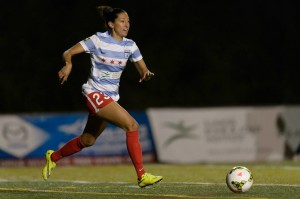 Portland Thorns FC weathered an early storm from Christen Press to eek out a 2-2 draw on the road against the Chicago Red Stars on Saturday.

Press scored twice in the opening eight minutes of the match, giving her four goals in two matches this NWSL season. But they were not enough after the Thorns made adjustments that went from damage control to nearly winning, scoring once in each half. The draw keeps the Thorns unbeaten and alone atop the NWSL with 7 points from three games.

Press opened the scoring in the 4th minute, settling a long diagonal ball and cutting inside on her right foot before hammering a shot past Thorns goalkeeper Nadine Angerer and inside the upper corner of the far post.

Four minutes later, it was much of the same from Press, who found herself once again on the left flank, settling a long ball. This time, Press pushed the ball to her left, past Thorns defender Courtney Niemiec again. Press fired a left footed shot from an acute angle that Angerer made a mess of, mis-timing her dive that saw the ball bounce off her left arm, down and into the net.

It appeared the Red Stars rout was on, but the Thorns scored the equalizer in the 29th minute, when Christine Sinclair combined with Allie Long, backheeling the ball to Long and getting back on it atop the 18-yard box. Sinclair found enough space to place her shot low and just inside of the far post, beating fellow Canadian Karina LeBlanc to halve Chicago’s lead.

LeBlanc came up big in the 11th minute, kick-saving a point-blank shot. The rebound fell to Mana Shim, whose shot was headed off the line by Red Stars defender Julie Johnston.

But Shim scored the equalizer just 90 seconds into the second half. Long found space inside of the 18 and although Johnston won the ball with a clean tackle, the ball popped out to Shim, whose left-footed shot from 20 yards out was just out of reach for LeBlanc.

With the match now tied, the Thorns pressed on and nearly grabbed a winner. Sinead Farrelly ripped a shot off the crossbar from 20 yards out in the 74th minute, It was the best chance for either team after Shim’s tally early in the second half.

Thorns striker Alex Morgan missed her second straight match due to a left knee contusion. Red Stars midfielder Shannon Boxx played the full 90 minutes for her club for the first time since August 20, 2011, when she played the entire match for magicJack in WPS Super Semifinal loss to the Philadelphia Independence.

Chicago will have Press, Boxx and Johnston next Saturday against Sky Blue FC for the first last time before the World Cup.

Saturday was the fifth consecutive meeting between the Red Stars and Thorns that ended in a draw.