For Breakers, a fresh start in a familiar setting 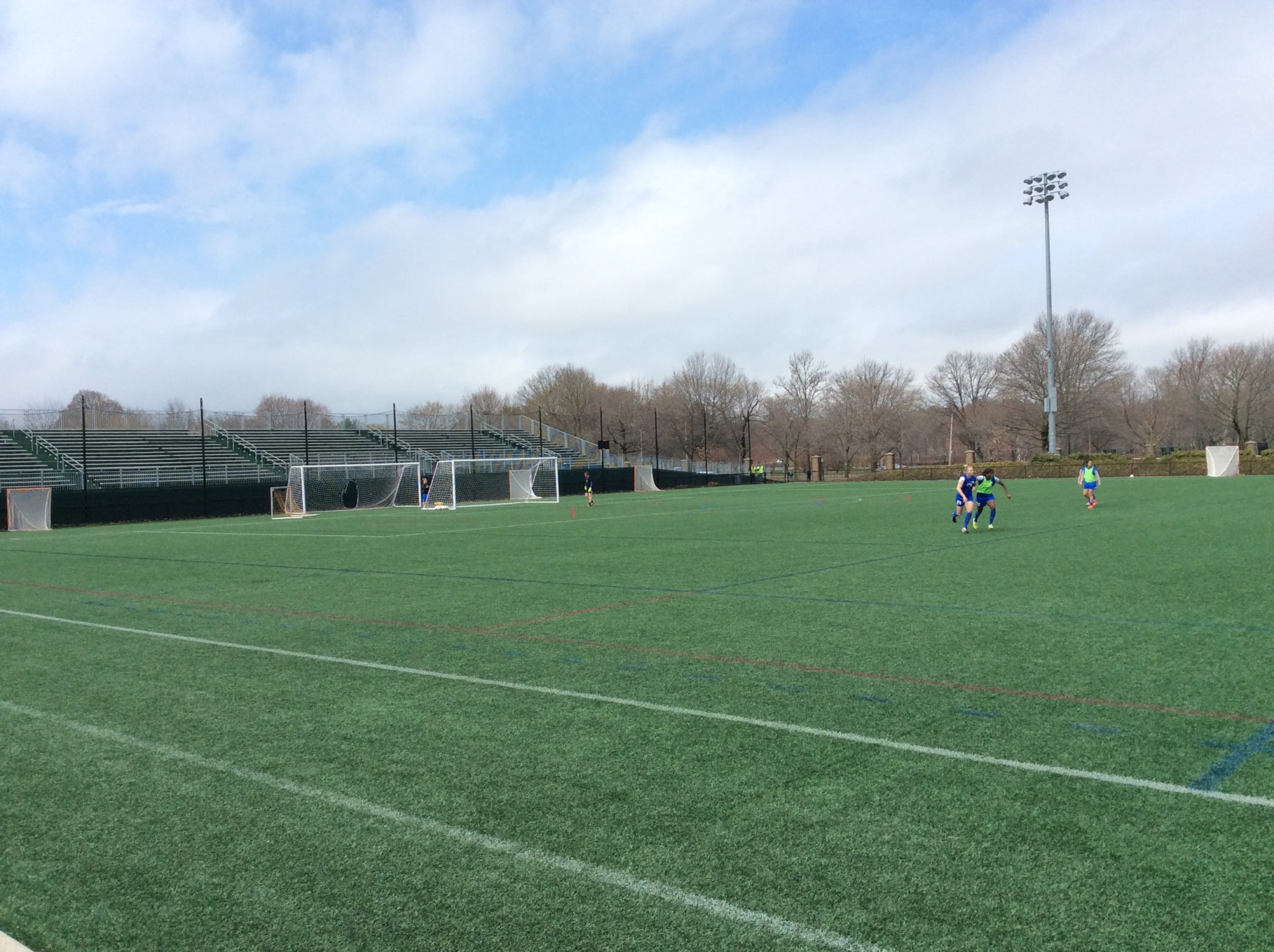 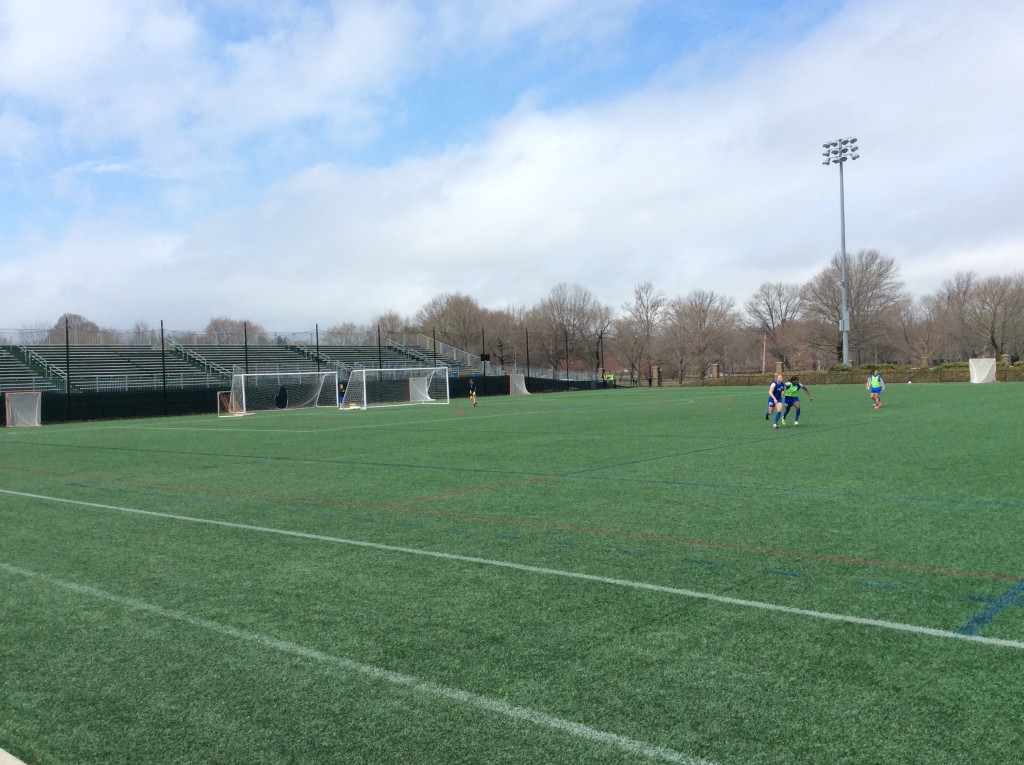 One thing became abundantly clear to the Boston Breakers franchise over the years as they constantly tried to figure out where to call home: Nothing was going to beat Harvard.

But this year, there is a twist. The Breakers open their home slate of the 2015 National Women’s Soccer League season on Sunday against the Houston Dash on the campus of Harvard University. Except this time, they are playing across the parking lot.

Soldiers Field Soccer Stadium is easily visible from the top of the 30,000-plus seat Harvard Stadium football arena, across the athletic complex that sits on the southern side of the Charles River. The Breakers will call Soldiers Field home in 2015 and beyond after what Lee Billiard, the team’s general manager, calls a six-figure investment. The NWSL club paid for the stadium upgrades in their entirety to bring the seating capacity up to 4,000 and meet the league’s minimum standards.

“We’re trying to create a new culture and a new professional environment in Boston,” Billiard said. “As we’re rebuilding our roster, we want these players to be here for a long time, so we’re starting to invest in all the things now to provide them the right environment.”

Moving across the parking lot at Harvard was prompted by two things, Billiard said: a need to create more demand for tickets, coupled with Harvard University’s decision to replace the antiquated artificial turf in the main football stadium this summer, a decision that also forced the Boston Cannons, a professional lacrosse team, to move for the season.

Harvard Stadium started as the home of the Breakers in 2009, when the franchise restarted play in WPS (the WUSA’s Breakers played at Boston University’s Nickerson Field from 2001-2003). Dilboy Stadium, in the Boston suburb of Somerville, played host to the Breakers in a semi-professional league in 2012 and in 2013, the first season of the NWSL. Last year, the team moved back to Harvard, having outgrown the multi-use public confines of Dilboy Stadium, which only sat around 2,500 fans.

A move back to Harvard in 2014 didn’t see a change in attendance, however. Boston drew 2,437 fans per game — almost the exact number as the year before at Dilboy, but in a more cavernous Harvard Stadium. The ticket demand that Dilboy had created was gone.

“It’s cool being in that big Harvard Stadium, but with the attendances we’ve had, we felt we had lost a bit of that atmosphere in the stands,” Billiard said. 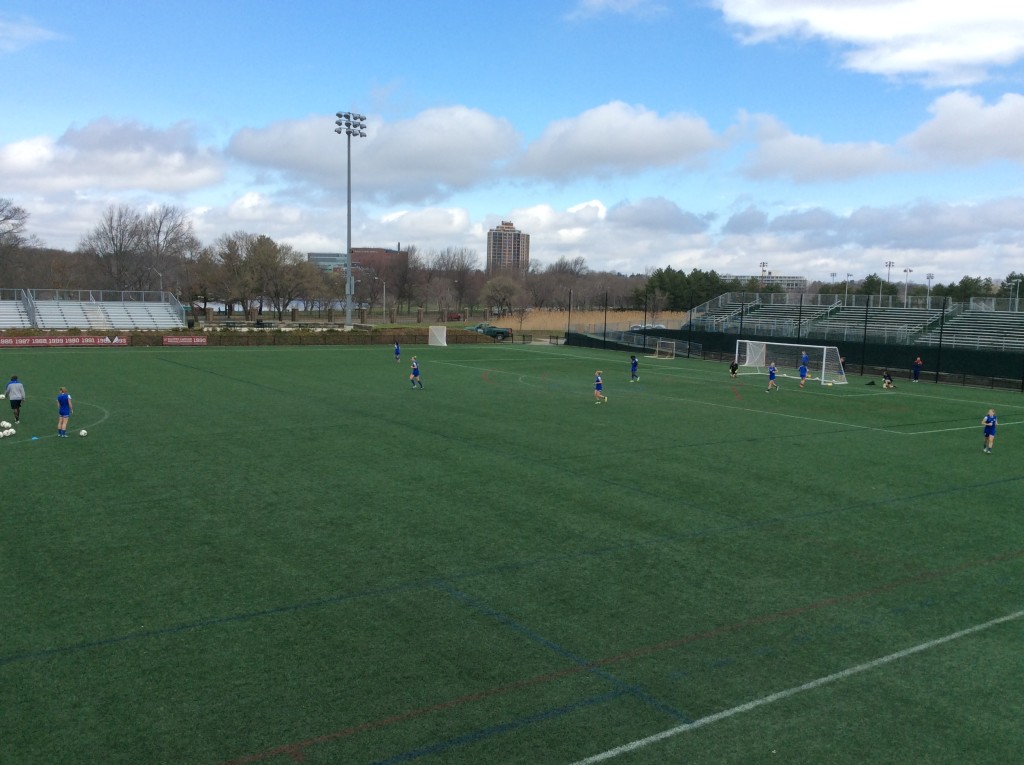 An opposite view of Soldiers Field, which will hold about 4,000 people, 300 of which would be standing-room only. (Photo Courtesy Boston Breakers)

Harvard’s central location and proximity to the T, Boston’s public rail line, makes it ideal. So the Breakers sought solutions for staying there. Enter Soldiers Field, which opened in September 2010.

Extended rentals of temporary stands — which Billiard compared to golf seating structures — account for the bulk of the cost in bringing Soldiers Field Soccer Stadium up to professional standards. The seats will go away in the fall, when the NWSL season ends and Harvard’s soccer teams go back to being the venue’s main tenants.

This move isn’t necessarily about downsizing. Billiard said the stadium can be expanded further in the future and it could have been expanded to 6,000-plus seats for this season, but the idea is to start by creating an intimate stadium environment of which both fans and players want to be a part.

“Wherever you sit in this new stadium, it’s a great view. You’re really close to the field. There will be a good environment all around,” Billiard said, adding that “the stands are on top of the field.” A supporters group will sit behind one of the goals, where the temporary seats have been added.

Cheaper rent and security for the smaller venue help offset some of the seating costs. Billiard said that the stadium is TV-ready (NWSL commissioner Jeff Plush recently teased a looming national television deal). Single-game tickets range from $15-27, while season tickets for the 10-game home slate start at $185.

The Breakers played at Soldiers Field once before, losing to the Philadelphia Independence in a game that will long live in infamy for Breakers fans. Boston lost the 2010 WPS Super Semifinal when Danesha Adams appeared to score with her hand for Philadelphia’s game-winning goal in extra time. “Hopefully we’re not going to have any luck like that,” Billiard said, laughing.

Part of this move is what the Breakers hope is the dawn of a new era both on and off of the field. Boston finished eighth of nine teams last year, only 2 points ahead of Houston, which was an expansion team. The Breakers also missed the playoffs in 2013, finishing fifth.

“We’re building back up again. We’re rebuilding the team and at the same time we’re rebuilding the organization as well,” Billiard said. “It took us literally two years of new revenue streams and penny scraping here and there to get us to the point now where we can really start investing a lot more of what we’ve made over the past couple of years to make the team bigger and better.”

Efforts to raise the team’s profile include increased marketing. The team is working with local TV outlet NESN on a season-long documentary.

Some things will remain the same. The ticket offices will still be in the fittingly charming Ivy League courtyard by the football stadium, where there will also be fan festivities for the opening match. Billiard said the team is working on logistics with the University to hang the Breakers’ Pillars of Excellence banners off the side of the Gordon Indoor Track building, which sits adjacent to Soldiers Field. Angela Hucles, Kristine Lilly and Maren Meinert have Pillars — the Breakers’ version of a team hall of fame — with Leslie Osborne set to join next month.

Those pillars will serve as reminders that the Breakers are the NWSL club with the longest-standing history in U.S. women’s professional soccer. And just like the person who constantly changes apartments, they serve as a touch of home in a new dwelling the club hopes is finally its last move for a long time.

“We’ve moved around from year-to-year over the past few years,” Billiard said. “Along the way, we’ve explored all the stadiums and all the options and it’s tough in Boston to find a good location that’s good for fans to get to, that meets the minimum standards of the league and is a good environment for the experience we want to put out to our fans. We found the perfect balance between everything at Soldiers Field Stadium. We have the capacity to add extra seating after that, so we’re looking to make this a future home for a long period of time.”