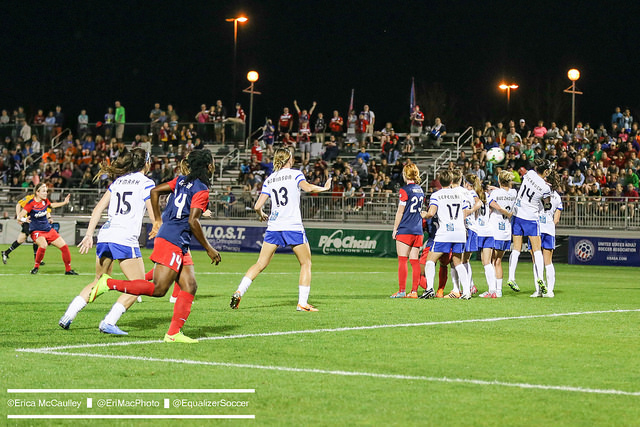 Week 2 in the National Women’s Soccer League brought some surprises and plenty of drama. Defending NWSL champions FC Kansas City now have two losses from two games this season after falling to the Washington Spirit, and the Chicago Red Stars surprised Seattle Reign FC thanks to a second-half stoppage time goal by Christen Press. This is how things shook out over the weekend:

FC Kansas City has two losses from two games, and now the Blues are trying to figure out what is wrong on short rest. They host Seattle Reign FC on Thursday in a rematch of the 2014 NWSL Championship. Seattle also lost on Saturday, blowing the game in stoppage time in an uncharacteristically sloppy defensive performance. Thursday’s game has all the makings for a primetime showdown.

Is anyone still surprised that Christen Press changes games? It was only last month that she shook French defenders out of their boots at the Algarve Cup, and none of this is new. Her two goals on Saturday once again displayed her speed and showed she is still sharp in front of net despite spending significant time on the wing for the United States. Press made a great Seattle defense look pedestrian on Saturday. That’s a great result for Chicago to open the season, too.

Lloyd, Brian stand out in middle

For all the talk of how great the midfields of Seattle and Kansas City are — and they absolutely are — the Houston Dash might have the most impressive central tandem through the first two weeks of the season. Carli Lloyd and Morgan Brian seem comfortable from their time together with the U.S. national team and they have translated that to the Dash. Both opposing coaches thus far have conceded that they lost the midfield battle to Lloyd and Brian. Unfortunately for Houston — which encouragingly has 4 points from two games — they only have one more match with the pair until losing them for the next two months due to national team commitments. But that could be the midfield to watch come summer…and maybe even September.

Nairn does it again

No player in the league has improved more from the end of 2013 to today than Christine Nairn. She had a breakout 2014 season and after moving from Seattle to Washington, and she stole the show again on Saturday for the Spirit, scoring two stunning goals. She could be one of the most important players in the NWSL during World Cup absences.

.@NairnChristine equalizes in the 9th minute with an absolute rocket from distance #WASvFCKC #golazo pic.twitter.com/CzGi0slTIG

New-look Dash now disappointed with away draw
The Lowdown: The non-retirement decisions