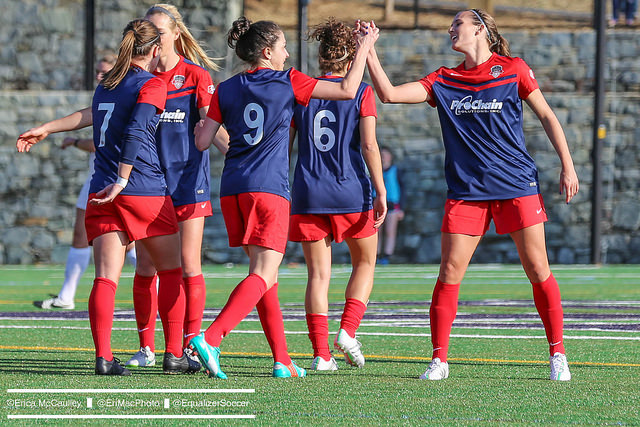 The Spirit look to rebound from a season-opening loss at home against defending champions FC Kansas City. (Photo Copyright Erica McCaulley for The Equalizer)

Another season opener for the Washington Spirit, another loss. Unlike last year’s opener, head coach Mark Parsons isn’t pinning the loss on an unacceptable mentality. Instead, he’s preaching patience and following the process. He’s confident his team’s performances will improve.

“I don’t think the plan changed too much whether we beat Houston or lost to Houston.” Parsons said earlier this week. “We’re very clear in where we’re going and the players and staff are very committed to that and we know we’re going to get there.”

Washington lost to the Houston Dash, 2-0 last Friday. For Parsons, the key to the Dash’s victory last week was winning the battle in the midfield. He felt his squad did well winning battles elsewhere on the field, except one that turned out to be the most crucial: the midfield. Parsons felt that his team didn’t lose this area, but rather Morgan Brian and Carli Lloyd won it.

“We couldn’t deal with the moods that those too were in,” Parsons said. “Those two were on another level.”

Washington’s task on Saturday won’t be any easier as FC Kansas City has a stellar midfield and perhaps the best defensive midfielder in the league in Jen Buczkowski. After bringing in players in the offseason specifically to help win battles in the midfield, the Spirit will have to better in this area.

The Spirit started two rookies on its back line last weekend and it was center back Megan Oyster’s turnover early in the second half that was the dagger for Washington’s hopes of earning points. As the case with the defenders, it’s the mistake is what people remember, not the overall performance. Oyster’s effort didn’t go unnoticed by her coach, though. Parsons has high hopes for his young center back in the future.

“I thought she was exceptional,” Parsons said. “She won more aerial battles, defending battles, 50/50 battles than any player on our team. She communicated well. She organized well and I think it was a great start for her…What I have been most impressed is her learning curve. When we feel like there’s an area to improve, she’s been an incredible student.”

Parsons certainly hopes she continues to be a quick study as Ali Krieger, who last year spent considerable time at center back for the Spirit, is out with a concussion for the matchup this weekend.

Crystal Dunn, who was the Spirit’s best player when she entered last week, is expected to play a much bigger role in Saturday’s match. Parsons explained that, given the tactical and technical preparation the team put in during preseason, it would have been difficult for a midfielder or a forward to start who’d only practiced once with the team. Dunn had been away with the United States national team, but she was informed earlier this week that she will not be headed to the World Cup.

Similarly, rookie outside back Caprice Dydasco was ready to play last week after missing a significant portion of the preseason with a muscle strain, but Parsons decided to go with his players who had been privy to more tactical work. After another week of training, perhaps the U.S. U-23 player will make her debut for the Spirit on Saturday.

Washington’s young players will have to step up if the team is going to top the defending champions, FC Kansas City. With both teams having lost their opening matches, it will be interesting to see how the game plays out. Will the Blues earn their first win against the Spirit at the SoccerPlex or will the Spirit win their first home opener?