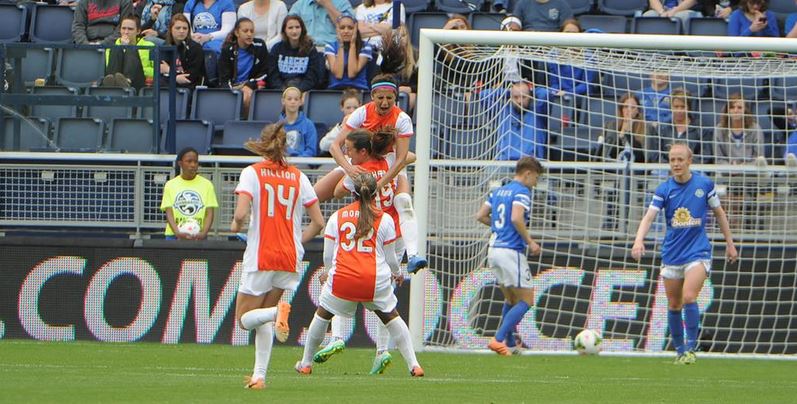 KANSAS CITY, Kan. – Defending NWSL champions FC Kansas City showed many of the attributes that led them to the title, but Sky Blue FC star Nadia Nadim had the only goal of the day on Sunday to lead her side to a 1-0 win at Sporting Park.

FC Kansas City boasts the offensive firepower of Amy Rodriguez, Lauren Holiday, Erika Tymrak. They outshot the visitors, 15-5 on the day and held much of the game’s possession. Twice in the first half alone, the Blues were able to send high, arcing shots toward goal. Sky Blue weathered the storm very well by compressing in the final third of the field anytime Kansas City ventured forward.

On the other end of the field, the Kansas City defense was not tested very much early. In the first 20 minutes, Katy Freels was the only one able to get a shot towards FC Kansas City goalkeeper Nicole Barnhart. Freels’ shot was dangerously close to sneaking in under the bar, but Barnhart was just able to tip it over the bar.

On the ensuing corner kick, Sky Blue was able to get the ball into the penalty box and had several chances to knock one in as FCKC struggled to clear the ball. Sky Blue maintained the pressure and it paid off just before the half-hour mark.

A missed clearance went back towards the goal, where Nadim was able to jump on it and hit a scorcher of a shot over Barnhart’s head and into the far side netting. Sky Blue had a very small amount of possession and very few shots, but Nadim’s strike gave Sky Blue the lead in the 29th minute.

“Winning this game is a huge accomplishment, but we also have to realize that we have a lot to work on,” Sky Blue coach Jim Gabarra said. “Kansas City has a great team. They really had us on the ropes over the first half hour, but we were fortunate to score a goal in the defining moment of the game. That great goal from Nadia really changed the complexion of the game and enabled us to settle down a little bit.”

The second half saw Kansas City take a more direct attacking approach. Rather than passing the ball up and down the field, the team began to take more chances with balls passed straight up the line. In the 66th minute, head coach Vlatko Andonovski inserted Sarah Hagen and rookie Shea Groom in the hopes of creating more offense.

By adding Hagan in for Rebecca Moros, Andonovski changed his back line to a three-back set with Amy LePeilbet and Leigh Ann Robinson flanking Becky Sauerbrunn.

The formation wasn’t only new for fans to see, Sauerbrunn even felt it was a difficult adjustment.

“It’s a little tough just because it opens up the field so much,” she said. “It’s tough to move into a 3-5-2, especially because we haven’t trained in that formation very much.”

Sky Blue played their game to perfection. They were the second-best road team in the league last season and are well on the way to repeating that success this season.

“Did we play perfectly? No. Were there things we could have done better? Yes, but we played our style of soccer and we played it well,” said Andonovski about the game. “They jumped on their chances and sometimes the best team doesn’t win.”

On the positive side for FC Kansas City, they put on a good show for a record-setting crowd in their only scheduled game at Sporting Park this season. The 8,489 announced attendance far eclipses their previous record of 6,000+ set at the league’s opening game in 2011.

Sky Blue will next open their home schedule on Saturday against the Houston Dash. That same evening, FC Kansas City visits the Washington Spirit for their first road trip of the season.