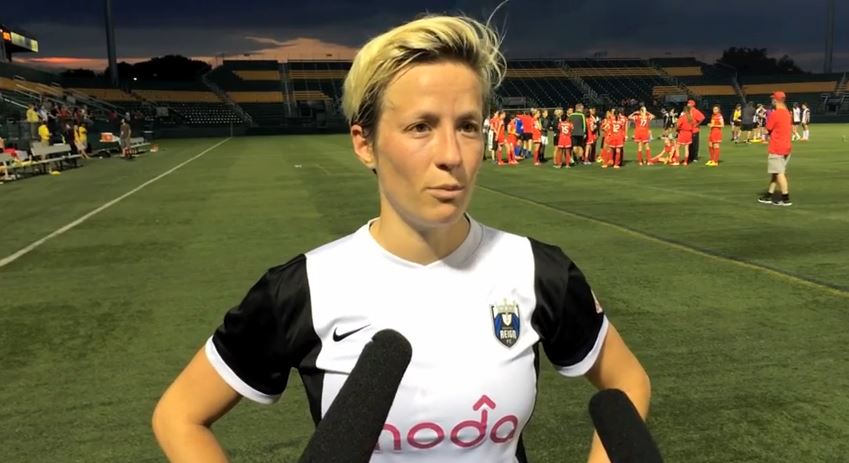 Rapinoe’s first two goals in the 70th and 74th minutes came at a crucial juncture for the Reign. Western New York scored against the run of play in the 68th minute when Jordan Angeli redirected rookie Sam Mewis’ cross into the net to cut Seattle’s lead to 2-1. But the Reign answered two minutes later to pull away in a match the Reign largely controlled.

Rapinoe completed the hat trick in the 87th minute, combining with Fishlock before slotting home the one-time finish.

“From a result standpoint, it’s great. We are a little disappointed about the goal we let in,” Rapinoe said. “Tonight was a huge effort from everyone. The energy from our bench and from the fans was great. Overall, I think everyone’s just buzzing about being back on the field. We put the work in all offseason… We love playing here and we love playing for this club behind this badge.”

Fishlock opened the scoring in the 25th minute on a flying volley, tucking away Megan Rapinoe’s cross in spectacular fashion.

The goal was a product of a sustained stretch of play for Seattle, who controlled most of the ball after an initial burst of energy from the Flash in the opening five minutes.

Yanez — better known by her maiden name, Beverly Goebel — doubled the Reign’s lead eight minutes after halftime with a calm finish past Flash rookie goalkeeper Sabrina D’Angelo, who made several spectacular saves on the night to keep the score from being even more lopsided.

The Reign had a golden opportunity to add to their lead from the penalty spot in the 37th minute after Flash defender Brittany Taylor dragged down Reign defender Kendall Fletcher in the box while the ball was in the air on a free kick. Kim Little, the 2014 NWSL MVP, stepped up to take the kick but pushed it wide to her left, failing to convert. Last year, Little converted all six of her penalty kicks.

D’Angelo denied Seattle another goal in the 57th minute on an incredible double-save, getting a knee to Little’s close-range shot and recovering back toward a seemingly open net to swat Merritt Mathias’ shot off the line. D’Angelo was quick off her line in the 64th minute to again deny Little near the top of the 18-yard-box.

Sunday’s fixture also marked the return of Sydney Leroux to Seattle after the Reign traded her to Western New York at the end of March in exchange for the rights to Abby Wambach. Leroux said on Thursday that she requested a trade to Kansas City to be closer to her new husband, Dom Dwyer of Sporting Kansas City, and she was “mad” about how she was traded to the Flash. A source close to the situation told The Equalizer that the Reign interpreted the request as a lack of commitment to Seattle and decided to trade her, eventually coming to a deal with the Flash.

Leroux put the Reign defense under pressure at times but didn’t have any significant looks at net.

The Flash return to the West Coast on Saturday to face Portland Thorns FC in a rematch of the 2013 NWSL final. Portland opened the season with a 4-1 win over Boston on Saturday. Seattle travels to Chicago next Saturday for the Red Stars’ season-opener.