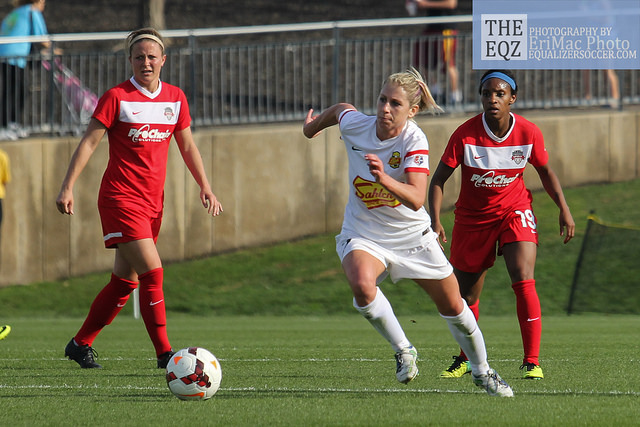 McCall Zerboni is now with the Portland Thorns, where she can start fresh. (Photo Copyright Erica McCaulley for The Equalizer)

It’s no secret that things didn’t go completely smoothly in either campaign. But 2015 offers a fresh start, not only on a macro level, but for individual players.

Enter McCall Zerboni. Overshadowed by a pair of blockbuster trades made by the Western New York Flash this offseason — in which they shipped away U.S. internationals Carli Lloyd to Houston and Abby Wambach to Seattle — is the trade that sent Zerboni to Portland. That trade also brought back to Portland defender Kat Williamson, who wore the captain’s armband during preseason.

The 28-year-old Zerboni played for the Flash in three different leagues, captaining the side in 2013 before Wambach took over the armband last season.

Zerboni is set to debut for Portland on Saturday, in the Thorns’ season-opener at home against the Boston Breakers. It’s a fresh start that she has been anticipating.

“Absolutely. That’s kind of what I was hoping for and what I was most excited about,” Zerboni told The Equalizer. “It is a fresh start. It’s a new place to kick my gears into place, have a beginner’s mind again and just refresh my mind.”

Thorns coach Paul Riley sees Zerboni — who gave Riley’s Philadelphia Independence side fits in 2011 in WPS — as the adhesive that will bind Portland’s midfield, a quality the Thorns have lacked. Riley isn’t short on admiration for Zerboni’s play, noting her tackling and aerial abilities alongside her simple, two-way play. But more than anything, Zerboni brings a needed “bite” to the Thorns.

“[She’s] just a competitor,” Riley said. “I think that’s the No. 1 thing she brings to the field is the competitiveness. Last year I felt we lost a little tooth and nail in there and she provides a little bit more tooth and nail for us. That’s what we wanted out of our midfield and I think that her rapport with Sinead [Farrelly] and Allie [Long] has been really good so far.”

Riley says that, because of those qualities, Zerboni will likely play underneath Long in order to allow Long more attacking freedom. Finding the right chemistry will be important, as will Zerboni’s leadership.

“I’m considered a veteran player now, which is hard on my ears, but I’m not afraid of leadership and taking on the role,” Zerboni said. “I’m one of the older players now, so hopefully I can provide leadership, respect, guidance and just some perspective. I think [Paul] is looking [toward] me with that. And also providing some glue in the midfield, keeping things consistent and together. Even pace – not getting too high, not getting too low, keeping the team calm.”

The Thorns will hope that collectively, they can do the same.