NWSL — Americans to watch and predictions 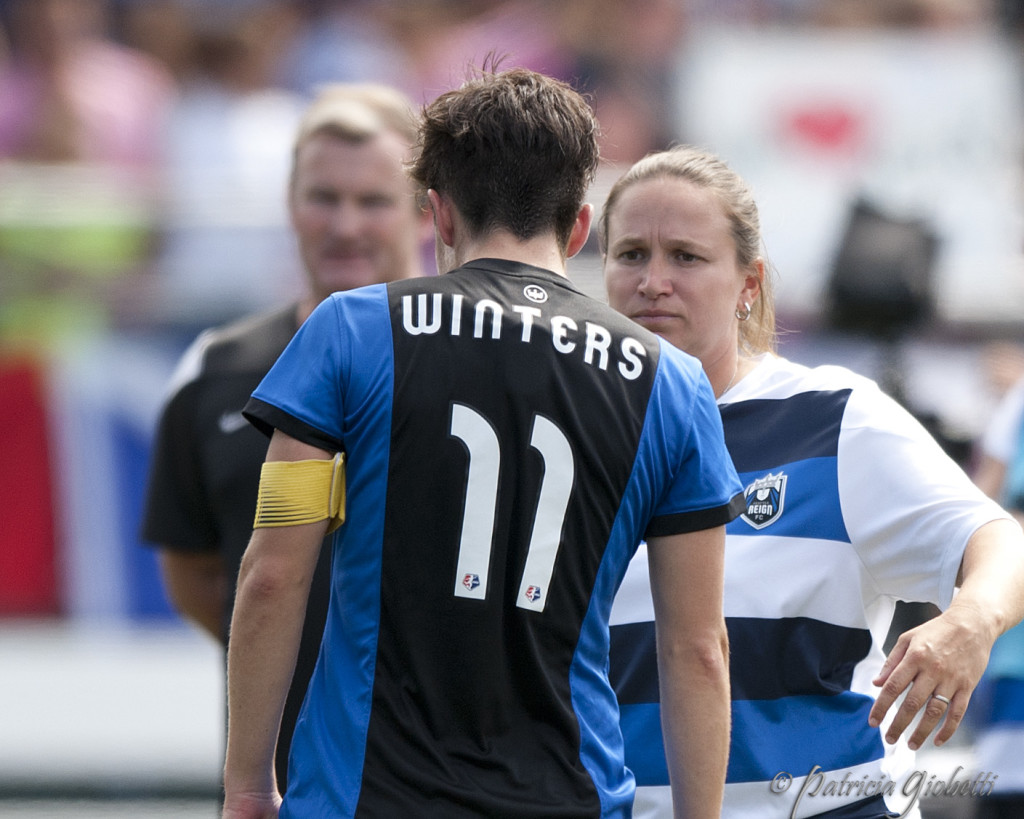 Seattle Reign FC suffered heartbreak in last year’s NWSL Championship, but looks poised for a return visit, where they can avenge the loss to FC Kansas City. (Photo Copyright Patricia Giobetti for The Equalizer)

The third and most interesting NWSL season kicks off Friday night in Houston, where the Dash will host the Washington Spirit.  Among the changes this season are a reduction from 24 games to 20 and spread out over four extra weeks.  There will also be a short break for the World Cup, which will raise the profile of the league while at the same time robbing all nine of its teams of vital womanpower, at least into early July.  There is also new leadership with Jeff Plush having taken over as NWSL’s first commissioner on Jan. 5.  He effectively replaces executive director Cheryl Bailey.

Two teams will play in new venues.  FC Kansas City will be at Swope Soccer Village after the move to Durwood Stadium proved fatal to attendance.  The Blues will first play their opening match on Sunday at Sporting Park.  The Breakers are staying on the same property but downsizing from massive Harvard Stadium to the backfield known as Soldiers Field Soccer Stadium.  For the second year running the Red Stars will play a doubleheader with the Fire at Toyota Park.

Some things are also very much the same.  The same nine teams are back and remarkably, the same nine coaches who began last season will be on the sidelines to open 2015.  Roster and competition rules remain largely unchanged.

Here are some other things to look forward to in NWSL 2015:

We identified 11 American players neither rookies nor going to the World Cup who should be factors in NWSL this season.

Jen Buczkowski, FC Kansas City:  Long a known commodity among diehard fans but never considered for so much as a camp at the national team level.  She’ll have her third role in as many seasons in Kansas City after Jenna Richmond became her second midfield partner in as many years (Desiree Scott) to leave the team.

Vanessa DiBernardo, Chicago Red Stars:  Played important minutes right out of the chute as a rookie in 2014 and likely to play an even more vital role this summer at Benedictine.

Katy Freels, Sky Blue FC:  Young midfielder is one of the toughest in the league to dispossess and offers an outstanding final ball.  Playing behind Nadia Nadim for a full season and getting Taylor Lytle back in the midfield should make 2015 Freels’ breakout season.

Bianca Henninger, Houston Dash:  An ample backup the last two seasons, first in Kansas City and then Houston, Henninger will get plenty of playing time in 2015 with Dash No. 1 Erin McLeod heading to the World Cup.  By season’s end we’ll likely know for sure if Henninger is a future NWSL starter.  The consensus is yes.

Jen Hoy, Chicago Red Stars:  Never high on anyone’s radar while playing college soccer at Princeton, Hoy has made an impression during both of her seasons in Chicago.  And she did it while battling various physical issues both times.  The team says Hoy is fully fit ahead of 2015 and they will be counting on her to fill the back of the net. 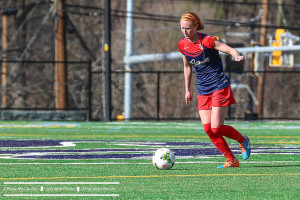 Tori Huster’s leadership and play in the middle of the field could define the Washington Spirit’s season. (Photo Copyright Erica McCaulley for The Equalizer)

Tori Huster, Washington Spirit:  As the Spirit got better in 2014, so too did Huster.  She has already had a positive start to 2015 with a brief cameo at national team camp.  Mark Parsons says it’s time to take her off the back line and put her in midfield.  It figures to be a positive move for Huster.

Kassey Kallman, Boston Breakers:  The other part of the Heather O’Reilly trade stepped out of her position to patrol left back for FC Kansas City and wound up an integral part of the Blues’ championship run.  Wherever she lands on the Breakers back four, she is almost certain to make it better.

Christine Nairn, Washington Spirit:  She can fill just about any role in a team’s midfield and she can also fill the net from distance — something the Spirit might need from time to time.  Should be part of the next wave.

Kealia Ohai, Houston Dash:  The No. 2 overall pick by the Dash in 2014 was injured on opening day last season.  She only missed one match but it took her until the second half of the season to fully recover and start to gain confidence.  Now fully healthy and making the rounds a second time, Ohai could be on the verge of stardom.

Elli Reed, Seattle Reign FC:  Reed was one of the few bright spots on the 2013 Reign and came of age last season playing alongside better defenders and in front of an in-form Hope Solo.  This is actually a shoutout to the entire Reign back four – Kendall Fletcher, Lauren Barnes, and Stephanie Cox were the regulars last season with newcomer Rachel Corsie now on board — which opens the season as the best unit in the league.

Leigh Ann Robinson, FC Kansas City:  Once on the fringes of the national team picture, Robinson will have to settle for trying to help Kansas City defend its championship.  A steady-to-solid player during her two NWSL seasons, she has value in that she can seamlessly switch between both outside back positions.

1 – Seattle Reign FC:  Defending shield winners return their back four and midfield and neither unit will be interrupted by the World Cup.  That should be enough to get them running out front again though a repeat of last season’s exploits is not likely.

2 – FC Kansas City:  Champs took some offseason hits but remain solid from back to front and no team figures to benefit most from the World Cup ending than the Blues.

3 – Washington Spirit:  Relying on internationals with no experience in the states to score the goals can be a dicey proposition, but if Francisca Ordega and Estafania Banini can score the Spirit are legitimate title contenders.

4 – Chicago Red Stars:  Their backend players are as good as anyone’s in NWSL and in a season where everyone and then some will be needed, that should be enough to help this talented and gritty team finally make the jump into the top four.

5 – Portland Thorns FC:  Can a team with Alex Morgan and a healthy Christine Sinclair possibly miss the playoffs? They can if there is uncertainty in the back and too many variables surrounding the World Cup.

6 – Sky Blue FC:  Nadia Nadim and an improving Maya Hayes should help them score more than they did early in 2014, but now they have questions in back with Christie Rampone nursing an injury and balancing the World Cup and Caitlin Foord (and Samantha Kerr) not due until July.

7 – Western New York Flash:  Disappointment in 2014 led to a complete overhaul which should have Flash fans excited for what lies ahead, but likely only if they are patient while younger players fall into their roles and goalkeeping issues get resolved.

8 – Houston Dash:  They will almost certainly score more often and be able to hang with the top teams every week.  But the back four could be a mess early.

9 – Boston Breakers:  They should be better but which players will take a match by its throat and make sure the Breakers take three points from an even match with 20 minutes to play?

Playoffs:  It is easy to forget how close the Spirit came to knocking off the Reign in the semifinals last year.  This time around they finish the job, winning in Kansas City against a team they can give fits too, and then doing the same in Seattle after the Reign take an ugly semifinal from the Red Stars.

Awards:  They’re difficult to predict in regular conditions.  When so many of the league’s top players will miss chunks of the season because of the World Cup it becomes downright impossible.  Nevertheless, Jessica Fishlock will be a mighty part of the Reign midfield and step into the attack more often, allowing her to replace teammate Kim Little as MVP.  Nicole Barnhart will reclaim goalkeeper honors playing behind a strong FC Kansas City squad.  Mark Parsons will finally get his due as Coach of the Year and Julie Johnston will be good enough in limited action to earn honors as top defender.

The major pieces of Seattle’s roster that tore through the NWSL last season will be with the club for the entirety of 2015, providing stability in a year of World Cup absences. Defending champions FC Kansas City will also adjust well to the losses of Jenna Richmond and Kassey Kallman, as well as losing Lauren Holiday and Amy Rodriguez to the World Cup. The Blues are stretched thin in defense but should be able to get by until July. Look for Portland to make a late-season surge, when the Thorns bring in four world-class forwards after the World Cup. And Sky Blue FC looks to have the pieces to get back into the playoffs.

The Reign will end Sky Blue FC season of improvement to return to the title game, but the New Jersey club will have something to build upon.

For the third straight season, these two teams meet in a semifinal in Kansas City and this time, Portland gets the better of the Blues to advance to the title game. The first two NWSL champions came out of this matchup.

The NWSL gets a dream derby matchup in the final and the Reign get the title they felt they deserved last season, keeping the Thorns’ strong attack at bay.