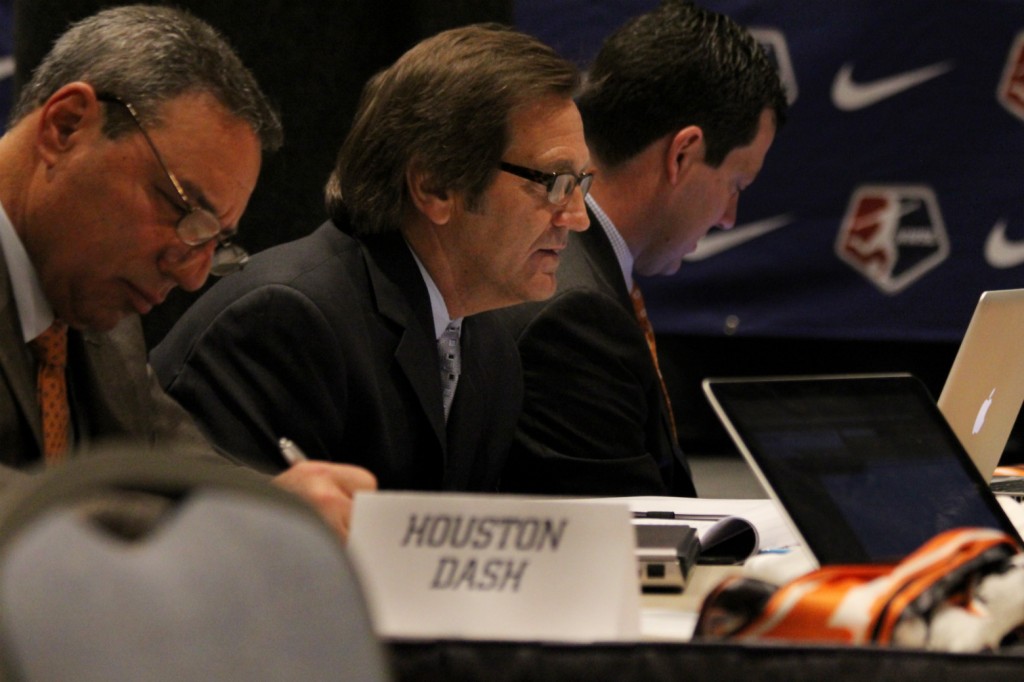 Randy Waldrum says its playoffs or bust for the Houston Dash this season. (Photo Copyright Meg Linehan for The Equalizer)

When the Houston Dash convened for the 2014 season, head coach Randy Waldrum was looking for his hastily-arranged squad to be a factor in the playoff race turning into August.  They nearly pulled it off only to collapse under the weight of injury and inexperience.

The Dash lost the final six games of their expansion season and instead of contending for a playoff berth, found themselves with the No. 1 pick in the 2015 draft.  Now with that pick, Morgan Brian, and a host of other changes, the goal for 2015 is not to contend for a playoff spot.  The goal is to own a playoff spot.

“The goal is to be one of those playoff teams,” Waldrum told The Equalizer.  “A regular-season champion has not won the league yet.  So you need to get in the playoffs and that’s the goal this year.”

Waldrum and Brian Ching pulled the trigger on the first major trade of the offseason by shipping Whitney Engen and Becky Edwards to the Flash for Carli Lloyd.  The latter will become the focal point of the Dash midfield — when she is there.  Brian will also be a major cog in the midfield but like Lloyd is all but assured of being in the World Cup with the United States.  The Dash also grabbed Rachel Axon and Stephanie Roche on the international market and Allysha Chapman as an allocated Canadian.  Ashley Nick and Niki Cross were also acquired from other NWSL squads.  Roche, an Irishwoman who became instantly famous for a FIFA Goal of the Year contender, has drawn high praise in the lead-up to the season.

“I think in the end she’s going to be a really good player,” Waldrum said.  “I can see why she scored the goals she does.  She’s a very composed finisher of the ball.  One of the things she’s going to have to adapt to is the physicality and the speed of our league.  Most of the European and the South American players have a little bit of a transition period when they come into our league.”

Brittany Bock is not a new player but her 2014 season ended with a torn ACL less than a half hour after it began.  She is due back later this month.  Ditto Lauren Sesselmann, who missed the entire season and will join the Dash after the World Cup. 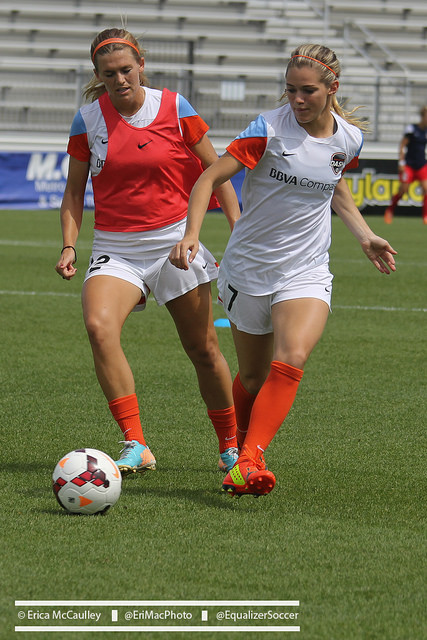 Kealia Ohai (right) looks set for a breakout season No. 2 with the Dash. (Photo Copyright Erica McCaulley for The Equalizer)

The Dash’s road from the cellar to the playoffs will ride on the shoulders of their forwards.  Not only does Waldrum believe they will score more goals but they should have minimal interruption as it pertains to the World Cup.  Last year’s No. 2 overall pick Kealia Ohai will be looking to build on the excellent second half of the season in 2014.

“When I started last season it was such a big difference for me from college to professional,” Ohai said.  “At the end of the season I finally got that confidence.  I wasn’t afraid to take people on, not afraid of being a rookie or going up against some of the best players in the world.  Starting this season I have that confidence from last year.”

Waldrum concurs regarding Ohai’s career arc and said the next step for her is to become more comfortable once she gets the ball in a position to score.

Melissa Henderson enjoyed a strong preseason while Roche and Tiffany McCarty will also be part of the striker corps.  Jessica McDonald is due to join the team this week.

“I think our attacking is going to be better,” Waldrum said.  “I think we’re going to be a much better offensive team.  We can create a lot more than we did at this time last year so I’m excited about that part of our game.”

The forwards might be stable but the midfielders who provide service will be a revolving door, at least early in the season.  Lloyd and Brian are expected to play in Friday’s opener but they entered the week without a single day of training with their new teammates.  Bock is in the final stages of recovery and will not be ready for the first few weeks of the season.

American defender Meghan Klingenberg is in the same boat as Lloyd and Brian, though she was at least on the team in 2014.  Chapman is in with Canada so there will likely be a converted player on the back line early in the season for the Dash.

“We’ve kind of been experimenting a little bit with one of the outside backs,” Waldrum said.  “If we had Sesselmann the month of April I wouldn’t worry so much about it because we would have the back line pretty much set.  But with Sesselmann not being there, for these early games we’re either going to have a converted player or a young player playing in the back.  Those things always worry coaches.  But we’ll play with what we’ve got and we’ll be okay.”

Stephanie Ochs is likely to return to her left back spot and erstwhile forward Ella Masar has been coming along nicely as an experimental defender.  One key for Masar will be to cut down on her yellow cards; she tied for a team-high four in 2014.

Keeper Erin McLeod is with Canada, but according to Waldrum, backup Bianca Henninger, “can start for pretty much any other team in the league right now.  She’s ready to go.”

Last season, the Dash played an up-tempo, 4-3-3 for most of the season even when things went south over the summer.  The 2015 version will change things up some with 4-4-2 and 4-5-1 lineups possible depending on who is available and who is on the other side on a given night.  And they will still pressure, but it might wind up being a bit more deliberate.

“We’re going to high-pressure when we can but be smart about it,” Ohai said.  “We have a lot of speed up front.  We’re definitely going to use that.  But we’re not going to press for 90 minutes.  We’re working through when the right time to press is and when the right time is to just (sit) back.  That’s going to be a big challenge from the start because we haven’t had much time together working on that, but we’ll work through that as the season goes on.”

When Lloyd, Brian, and Bock are in the midfield, the Dash will have the ability to get the upper hand on most teams in the middle of the park.  To become a top-four club they will have to steal some points when they’re not, and not waste much time integrating them when they do get there.