Tori Huster’s leadership and play in the middle of the field could define the Washington Spirit’s season. (Photo Copyright Erica McCaulley for The Equalizer)

The Washington Spirit’s turnaround from dead-last in 2013 to playoff position in 2014 was one of the most intriguing storylines of the National Women’s Soccer League last year. After ending with minus-7 goal differential, it’s clear that the Spirit will have to better on the field this year to earn a playoff bid. Regardless of the sport, it’s safe to say a team that gives up more points than it earns cannot expect to find itself in the playoffs two years in a row.

Head coach Mark Parsons spent the off-season reshuffling his roster in hopes improving his team’s consistency. In fact, the team has nearly the same number of returning players as they did a year ago, with 11 returning this year compared to 9 returnees a year ago. Parsons will look to instill his blue-collar mentality in his revamped team, in ironically, one of the least blue-collar cities in the country.

Parson understands that the team must be better on both sides of the ball in order to have a successful season. “It has to be better at the back,” he said. “We can’t be conceding the goals that we did last year and at the same time we have the challenge of keeping the amount of goals we scored.”

On paper, it appears the Spirit have addressed the issues with its defense. However, as much as the team’s roster has changed since the league’s inception, the team is plagued with the all too familiar question: Who will score? The answer to that question is a bit more complex.

Another element missing on the roster is size. The team has exactly three field players who measure 5-foot-8 or taller. While physical size is not determinative of how physically imposing a team can be or how well a team performs in the air, a comment Parsons made after the 1-0 loss to Virginia last week may be cause for concern.

Parsons was otherwise happy with the team’s performance but noted Virginia was tougher than his side. With an undersized roster, it will be important for the Spirit to “play tough,” especially against teams known for playing a more physical brand of soccer. 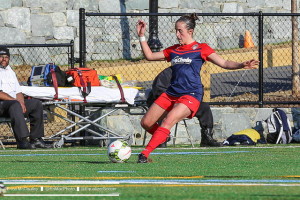 Amanda DaCosta joins the Spirit after two seasons and two titles with Liverpool. (Photo Copyright Erica McCaulley for The Equalizer)

Washington lost its previous answer to the goal-scoring question, Jodie Taylor, in a draft-day trade with the Portland Thorns. When Taylor’s tallies are combined with those of Diana Matheson, who is currently out with an ACL injury, the team has lost over half its goals from last season. These absences will loom large heading into the season, especially with Weimer and Miller still recovering from injuries.

The Spirit have added a couple of unproven internationals to help fill the scoring void: Argentina’s Estafania Banini and Nigeria’s Francisca Ordega. Washington’s remaining international slot will be used to bring in more attacking talent after the World Cup. The team has also added attacking midfielder Amanda DaCosta, who is back in the U.S. after spending two years with Liverpool.

Washington also acquired Angela Salem and Joanna Lohman, who Parsons expects to do the dirty work necessary in midfield for the team to be more consistent defensively. The back line has seen massive change in the offseason with Parsons adding five new defenders to the roster, including three rookies.

If there’s one constant in D.C. the past two seasons, it’s been Tori Huster. Heading into the 2015 season, Huster will finally be able to play her natural position. The squad will no doubt rely on her for leadership during the World Cup, evidenced by her donning the captain’s armband through the preseason.

“For me she’s right up there as being one of the best defensive midfielders in the league,” Parsons commented last week. “It’s up to her to grab this opportunity, be consistent in that role and grow as a player and grow as a person and we’re very confident that she’ll do that.”

With so much uncertainty surrounding the forward core, the pressure will be on two of the team’s more attack-minded midfielders, DaCosta and Christine Nairn, to notch goals. Nairn, who scored the third most goals on the team last year, will need to produce again this season. DaCosta may end up being a midfielder in name only after spending much of preseason further up the field.

In the five games that goalkeeper Ashlyn Harris didn’t start last season, the Spirit secured exactly one point. Albeit, most of those games also coincided with absences of other allocated players, this is still worrisome for Spirit fans. Clearly, the question surrounding the Spirit during the World Cup is how well the defense will perform without Harris and defender Ali Krieger,. The team’s other U.S. allocated player, Crystal Dunn, spent the majority of last season at outside back but will play further up the field.

Parsons expects the defense to be better this season.

“I think we’re better back there from start with the players that we’ve got and then as a staff we’ve made sure that we’re better with our preparation and organization,” he said.

The outcome of the 2015 season for the Spirit may come down to how well its defensive reinforcements pan out during the World Cup. How steep will the learning curve be for rookies Megan Oyster, Whitney Church and Caprice Dydasco? Kelsey Wys, who holds 17 Florida State goalkeeping records, showed flashes of brilliance in a tough season for the Flash last year. Can she continue improve and become the reliable backup that Washington needs?

With the uncertainty surrounding the Spirit’s strikers, it’s tough to predict where the Spirit will land when the dust settles. It’s worth remembering that not many people expected Jodie Taylor to be one of the top goal scorers a season ago. Will one of the unknown internationals make a splash this season? Alternatively, does the team have multiple scorers who can score regularly? If not, it may be a long season in D.C. If the Spirit can manage offensively, the team should find itself on the right side of the playoff line.

The Lowdown: A conversation with Jeff Plush
Breakers stick to blue and white kits, with a twist