The Boston Breakers will be one of the teams least impacted by the World Cup. Will it pay off in the standings? (Photo Copyright Clark Linehan for The Equalizer)

Boston endured its snowiest winter on record in the 2014-15 season, accumulating 108.6 inches of snow. It was a miserable stretch for Bean Town, and all the more reason for residents to head south for a warm vacation.

The Boston Breakers made their way to Florida to end the month of March, playing the Jamaican national team twice in preseason and completing some much-needed training sessions. The climate in Boston doesn’t allow for much outdoor training ahead of the National Women’s Soccer League season, meaning sessions are often limited to when the team can find space indoors.

“It was a big success all-around,” Breakers coach Tom Durkin said of the trip to Florida, which saw the team post back-to-back 5-0 wins over Jamaica. “It was something that I really pushed for in my end-of-year report, to get outside.”

Durkin says he will still end up a few training sessions short of the number he would have liked to have had heading into the team’s April 11 opener away against Portland Thorns FC, but this preseason was “significantly better” than last.

He and the Breakers will hope that the season ahead proves more welcoming than last year’s, too. Boston finished eighth of nine teams in the league while giving up a league-worst 53 goals and missing the playoffs for the second year running.

The stories of the Breakers’ offseason have been retirements and the influx of Brazilians. Boston originally agreed to terms with Andressa Alves and Francielle, but those players will be part of the new Brazilian residency program. Instead, Rafinha and Bia join Ketlen Wiggers and Suzanne Pires — who previously played for the Breakers Reserves — as A Seleção members to join Boston. Bia, 29, is the most experienced, but Durkin says Pires has been the standout of the four thus far in preseason. What Boston must deal with is the retirement of some young, talented players in Courtney Jones and Jazmine Reeves, both of whom left soccer in their mid-20s to pursue better business opportunities in another field. Jones could play almost anywhere on the field and Reeves showed her potential last May when she bagged an impressive hat trick against Portland in a 4-1 home win. But no losses will be felt more than that of forward Lianne Sanderson, who was Boston’s best player in 2013, and Heather O’Reilly, who led the team in goals (nine) in 2014. Sanderson chose to return to Arsenal in this World Cup year and O’Reilly was traded to FC Kansas City. 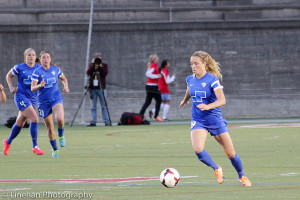 Kristie Mewis’ play will be crucial to Boston’s success in 2015. (Photo Copyright Clark Linehan for The Equalizer)

Kassey Kallman was acquired in the trade that sent O’Reilly to FC Kansas City. There, Kallman won a championship while starting 18 games as a rookie. This year in Boston she will be asked to take on even more responsibility, likely as a center back. But the most important piece to the Breakers this season could be Kristie Mewis, who Durkin says has come back from an offseason in Japan with a new-found confidence and sharpness. Mewis is no longer in the picture for a spot on the United States’ World Cup roster, meaning she’ll be with the Breakers for the entire season. Boston will need goal-scoring opportunities to run through Mewis and Katie Schoepfer.

Alyssa Naeher looks to have cemented her place as the United States’ No. 3 goalkeeper, meaning the Breakers would be without their No. 1 for a good stretch of the middle of the season. Naeher was NWSL Goalkeeper of the Year in 2014 for pulling off all sorts of spectacular saves, despite her goals against average. No Naeher means big minutes for Jami Kranich. And unique to the Breakers as the World Cup absences go will be the the situation of defender Cat Whitehill, who will miss five NWSL matches to cover the World Cup for Fox.

Durkin says he will address the quandary of the World Cup by trying to establish “as stable a line-up as possible” throughout the season. The back line will be young and slightly experimental, with the possibility of Maddy Evans at right back, Mollie Pathman at left back and Whitehill and Julie King pairing with Kallman centrally. The Breakers will be one of the team’s least affected by the World Cup, but a lot of pieces — new Brazilians, the defense, Mewis and Schoepfer — need to click together to push for a playoff spot.