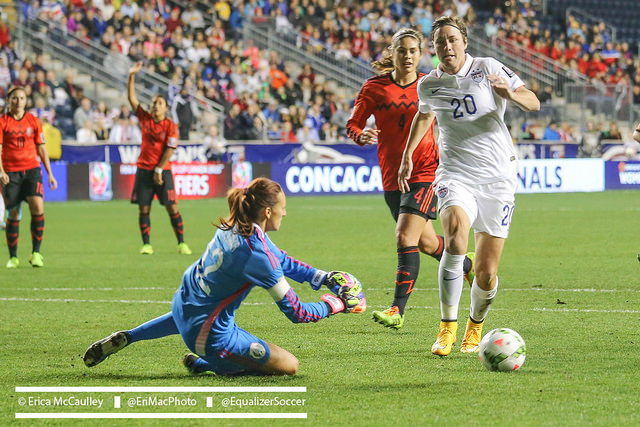 Advanced data shows that Abby Wambach’s goal-scoring as a whole hasn’t dropped off — except for against the world best teams. (Photo Copyright Erica McCaulley for The Equalizer)

Abby Wambach’s form over the past two years has been as scrutinized as any U.S. national team player’s, but objectively analyzing it is hard to do using only the eye test. This is where advanced stats can help tremendously.

Before getting into the numbers, a quick primer: Not all players are on the field for the same amount of time in a given season, and as such, it is essential to convert a player’s data into per 90 minute format (i.e. how many goals or shots a player had per 90 minutes on the field). Comparing players using just raw data, such as goals or shots, can be misleading without the context of how many minutes each player was on the field.

One more challenge with analyzing raw data is the issue of goals scored from penalty kicks. At Statsbomb, Ted Knutson explained succinctly why controlling for penalty-kick goals is important in player evaluations:

Penalties are converted at a 76 percent clip on average anyway, and any number of players on a team can do this. Therefore you shouldn’t be rewarding guys for scoring penalty goals – you actually need to subtract those from goalscoring totals.

Thus, the best way to use goal statistics is to combine both the “per 90” and “non-penalty goals” conversions in a metric called “non-penalty goals per 90 minutes,” or NPG 90 for short. With that primer, let’s jump right in and look at Wambach’s NPG 90 stats over the last few years:

From a statistical perspective, it’s only really apparent that Wambach’s performances have dropped since 2012 when we dig in a little deeper and look at her non-penalty goal-scoring rate against nations in the top 15 of FIFA’s world rankings, which provides a large sample size.

So how do these numbers compare to those of Alex Morgan and Sydney Leroux over the past three years? That’s a particularly interesting question in light of Monday’s blockbuster NWSL trade, which saw Seattle Reign FC acquire Wambach and the Western New York Flash land Leroux.

—
As you can see (spoiler alert!) Morgan’s NPG 90 stats for 2012 were phenomenal. Her 1.03 NPG per 90 against top 15 teams means that on average, you could count on her to score a goal every time the U.S. plays against a top 15 nation. In 2013, Morgan actually had a better scoring rate when playing against top 15 teams (0.95 NPG per 90), compared to her scoring rate against all opponents (0.67 NPG per 90). Morgan’s 2.09 NPG-per-90 stat from 2014 is skewed since she played just 86 minutes against top 15 nations due to injuries. These numbers underline just how imperative it is to keep Morgan healthy if the United States wants to go deep in the World Cup.

Leroux’s effectiveness off the bench in late-game situations in 2012 is also clear. She scored at a rate of 2.44 NPG per 90 in 517 minutes of action that year. Her 1.25 NPG per 90 vs top 15 nations is inflated a bit by a small sample size of just 216 minutes against those teams in 2012. When given much more playing time by Tom Sermanni and Jill Ellis in 2013 and 2014, her numbers understandably dropped off, but are still quite good.

Amy Rodriguez and Christen Press were not included here for various reasons. Rodriguez played so little in 2014, and not at all in 2013 while pregnant, that it’s difficult to make comparisons between those two years and her 2012 season. Press often played a deeper role on the wing in 2014, therefore a direct comparison to Wambach, Morgan and Leroux, who are usually always played up top, would be unfair.

Again, stats don’t always tell the whole story, nor does watching performances and critiquing them subjectively. But marrying stats and the eye test can give us more than either can separately. So, what’s the conclusion here? Wambach has shown that she can still score at will against those teams outside of FIFA’s top 15. But when stacked up against the world’s best, the numbers show that she hasn’t been scoring like she used to. With a group that includes two opponents in the world’s top 10 and a tough knockout round to follow, will the trend continue at the World Cup?

Data compiled by Emily Dulhanty. Graphic by Jeff Kassouf. The raw playing time and goal data used in these calculations is from the statistics page on US Soccer’s website. London 2012 data was taken from FIFA.com. FIFA rankings were used on a game-by-game basis (i.e. China was ranked 16th on April 6th and 10th, 2014 so those games were omitted. China was ranked 14th on December 10th, 2014 so that game was included).