Sharp, with a catch: Red Stars roll out new kits 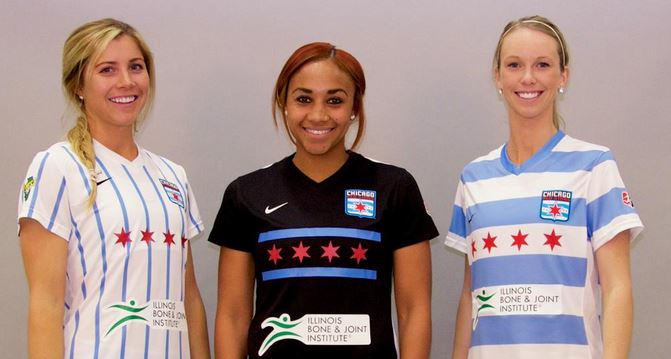 Last season, the Chicago Red Stars had the best kits in the National Women’s Soccer League. The baby blue and white hoops jersey with the four red stars to replicate Chicago’s city flag was outstanding.

That returns again in 2015 — except with red shorts and socks — but the team on Sunday unveiled a new alternate jersey and third kit for the 2015 season. The alternate kit is white with baby blue pinstripes — bringing on memories of the 2010 Washington Freedom jerseys, which were navy with white pinstripes — and the third kit is a sharp black jersey.

The main criticism? Well, it’s a necessary evil for paying the bills: a horribly placed sponsor logo that sits at stomach level due to the stars across the chest.