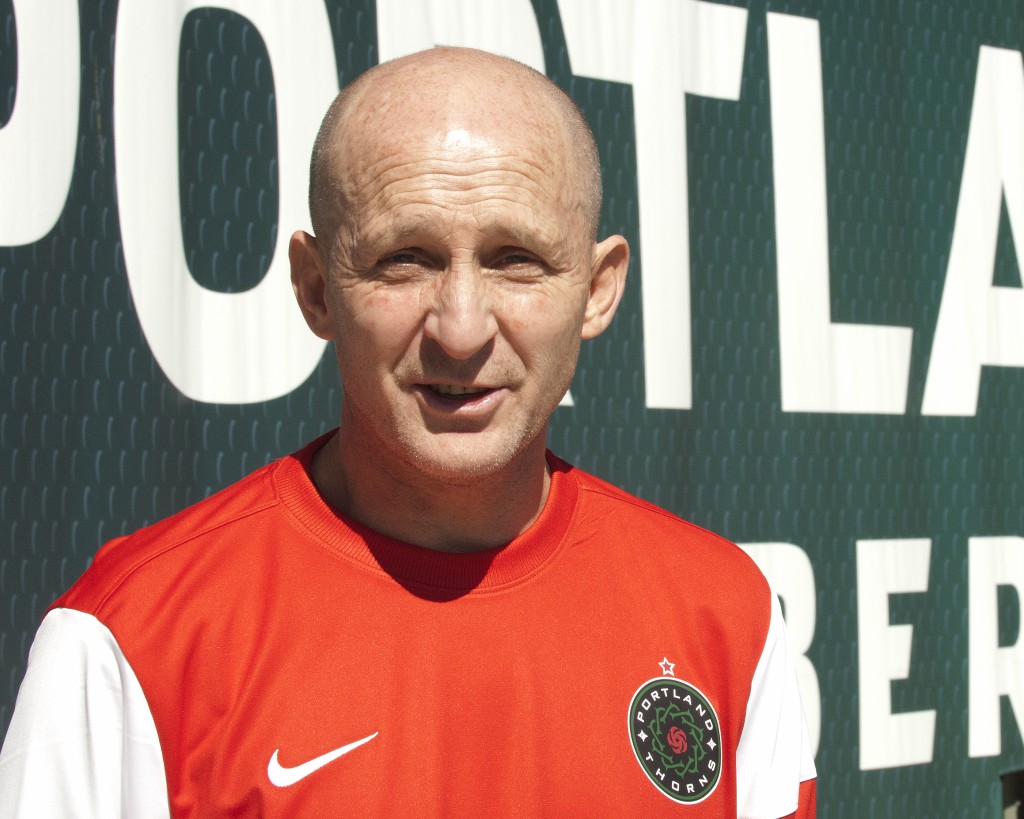 Paul Riley is getting to know what his team will look like with most World Cup players missing. (Photo Copyright Patricia Giobetti for The Equalizer)

Though FC Tucson is still a few months away from establishing their 2015 roster, they had a number of local guest players with considerable experience, including University of Arizona grads Mallory Miller (who played briefly in Germany), Analisa Marquez (Boston and Atlanta in WPS and the Buffalo Flash in the W-League) and Sam Monahan (ex-Northern Arizona University and Finnish side FC Honka).

The Tucson club played for two seasons in the WPSL as the Tucson Soccer Academy, making the playoffs after capturing the Big Sky North Division championship with a 10-9-3 record in 2013, followed by a 3-7-2 mark last season. The team was recently folded under the FC Tucson (PDL) umbrella. The FC Tucson organization (begun in 2010) is one of the best-run minor league organizations in the U.S. and has regularly hosted a number of MLS teams in preseason, as well as a Denmark-Canada international in January 2013. A testament to their presence in the community is that they attracted a solid crowd of 1,118 for the Thorns match on a Wednesday night.

Thorns head coach Paul Riley was pleased with the match since he was able to integrate some new players into the side.

“It’s building the pieces, getting to know some of the newer players like Jodie [Taylor] particularly up front, slotting [McCall] Zerboni into the midfield and bringing Kat Williamson back into the middle of the backline. They have all been big pluses so far,” Riley said.

[LAULETTA: How will Wambach’s decision not to play in 2015 impact NWSL?]

Riley was also pleased that his team was able to play a non-collegiate side this trip, after last year dispatching the University of Arizona, 10-0 and Arizona State University 5-0 —both NCAA tournament qualifiers in 2014.

“I thought the first half was some great football, 16 to 20 passes types of combinations,” he said of FC Tuscon. “They came out with bite…we want competitive and physical games. Some [FC Tucson] players had been in combines and were good players. That was a good game for us. We need that in preseason. We don’t get that often. The colleges don’t really give that to you.”

Riley said that he didn’t understand why MLS teams regularly play each other in preseason but NWSL teams don’t. This season, all nine NWSL teams are primarily stocking their preseason slate with collegiate teams, while the Boston Breakers just played two games against the Jamaican national team in Florida (both 5-0 Boston victories).

“We are past that point; we can’t play colleges anymore,” Riley said of preseason. “Fifteen years ago MLS played colleges — they don’t play colleges anymore. We’re at that point now, third year in — we have to get away from colleges and come play each other. We don’t play Seattle until July but they won’t play us in preseason. It’s a great opportunity for Seattle and maybe a few national teams to come down here [to Tucson] and play a round-robin tournament. It will give you a good test. You’re trying to work on a formation changes but you can’t when you’re not getting any pressure on you in the back. [Wednesday] we got caught out a couple of times — that’s something to improve on.”

[LAULETTA: Tipping the scales in NWSL in 2015 — the World Cup factor]

Riley added two very high-profile forwards for 2015, despite having U.S. international forward Alex Morgan and Canadian international forward Christine Sinclair back for their third season together. Jodie Taylor was traded for college draft picks in January from the Washington Spirit, where she scored 11 goals with two assists in 21 games last season, helping them achieve the playoffs for the first time in NWSL.

Taylor went to college at Oregon State but will likely miss a good bit of the first half of the season, like Morgan, Sinclair and Americans Tobin Heath, Rachel Van Hollebeke, German goalkeeper Nadine Angerer and Australian winger Steph Catley due to Women’s World Cup duty. Those absences were apparent this week.

“I thought we lacked a little bit of juice up front for me last year,” Riley said. “Alex was coming off of a lot of injuries and Sinclair wasn’t herself in front of net. We wanted two legit forwards.”

The other new arrival is Genoveva (Ayo) Anonma, who is finishing the Frauen-Bundesliga season with Turbine Potsdam. The Equatorial Guinea forward was a revelation at the 2011 Women’s World Cup, scoring two goals. She first came to Germany to play with USV Jena in 2009. She transferred to Turbine Potsdam in 2011 and led the league in scoring in 2011-12 with 22 goals, the first foreigner to accomplish that feat. Anonma is the 10th highest goal scorer all time in the Frauen-Bundesliga. She was the African Confederation’s Women’s Player of the Year in 2012.

“I saw her on video and I said, ‘I’m going after her.’” Riley said. “I thought, ‘I don’t know if I have any chance of getting her but I’m going after her.’ After lots of persuasion she decided to come to America.” Riley said that she will have to adapt culturally to a new country and league but that her signing “was brilliant for us; she is going to be special. She’s clever, and can score goals.”

Anonma arrives in May but Equatorial Guinea is not in the World Cup so she should provide some stability to the squad during May and June in particular. After the World Cup, Riley will have a plethora of scoring options. “It will be good,” Riley said. “Ayo, Jodie, Alex, Sinc together are all quality. It could be hard down the road [balancing playing time] but I’m okay with that.”

Riley has not given up hope that he will have Spanish international Vero Boquete return after the Women’s World Cup, as he still has one international spot open. Boquete scored four goals and added six assists in 15 games in Portland in 2014 and was a WPS Player of the Year under Riley’s tutelage with the Philadelphia Independence in 2011.