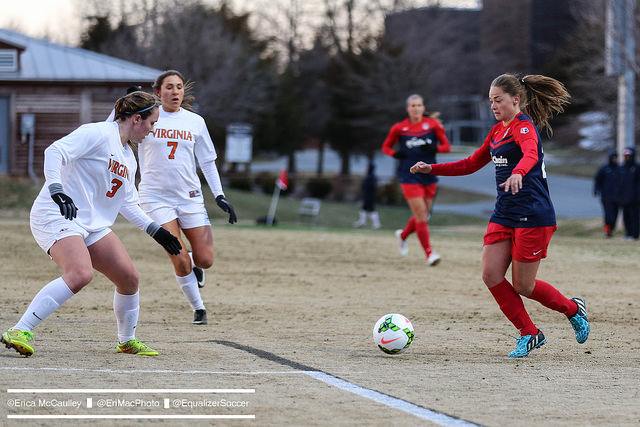 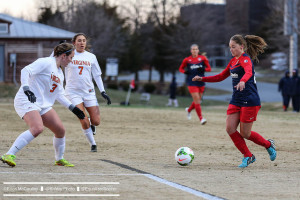 The Washington Spirit fell to Virginia on a frigid day. (Photo Copyright Erica McCaulley for The Equalizer)

The Washington Spirit fell to the University of Virginia, 1-0 on Saturday in the Spirit’s first loss of the NWSL preseason. Alexis Shaffer scored the lone goal of the match in the 35th minute for Virginia, who finished national runners-up in 2014.

The Spirit have yet to beat Virginia in any of their scrimmages. Last year, the teams played to a draw and in 2013, Virginia trounced the Spirit, 6-3.

The Spirit attempted several times to take advantage of the windy conditions and chip Virginia goalkeeper Emily Lillard, but the shots were mostly off the mark. One of forward Laura del Rio’s attempted chips did hit the crossbar in the first half. It took a great defensive play by Virginia’s Tina Iordanou to keep the Spirit’s second chance out of the net.

After coming in at halftime, Lillard made several noteworthy saves to keep the Spirit’s deficit from increasing. She tipped two dangerous shots over the cross bar and made an excellent save with her leg on a third one.