Anticipation brimming in N.J. with return of Nadim 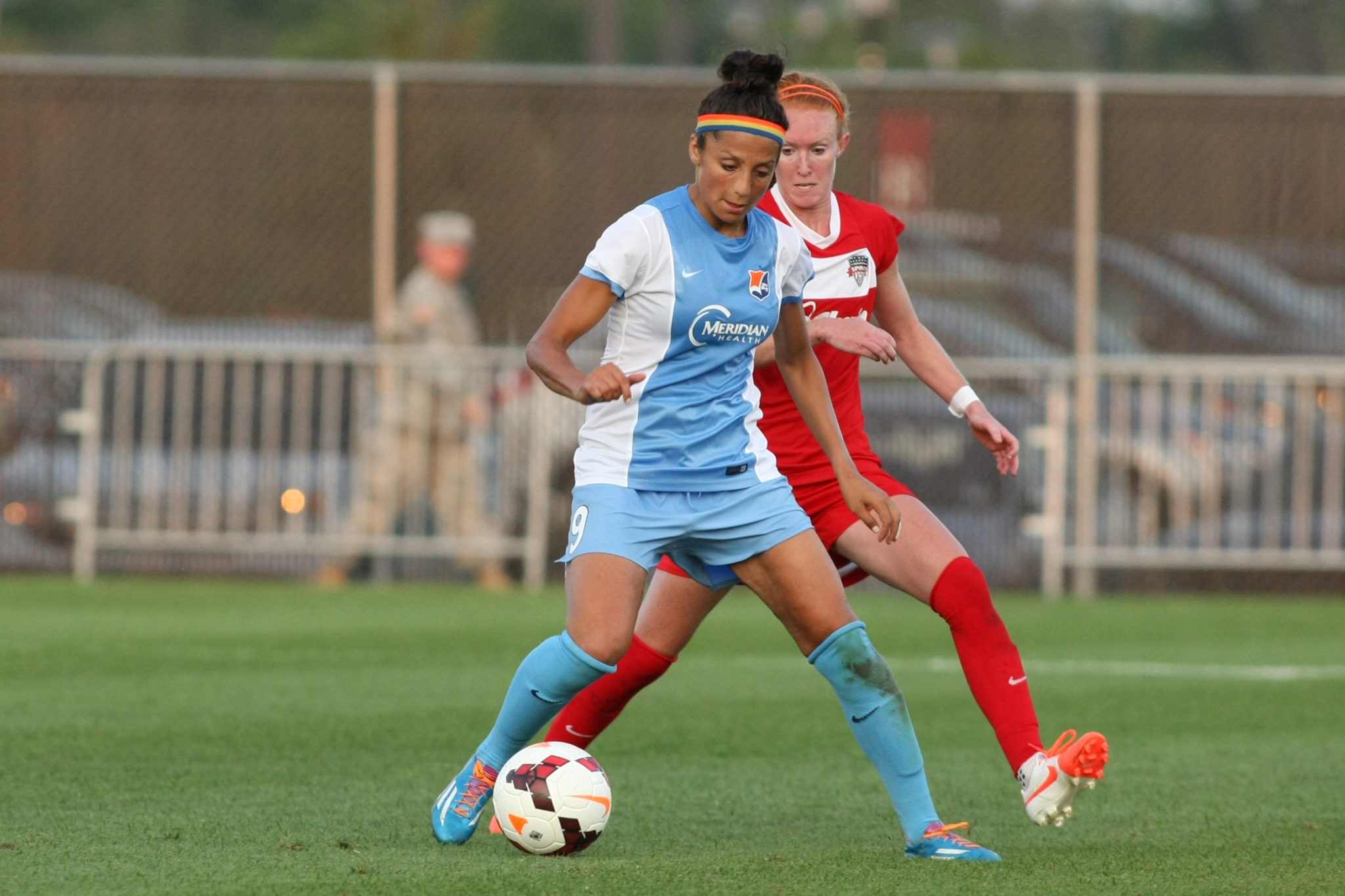 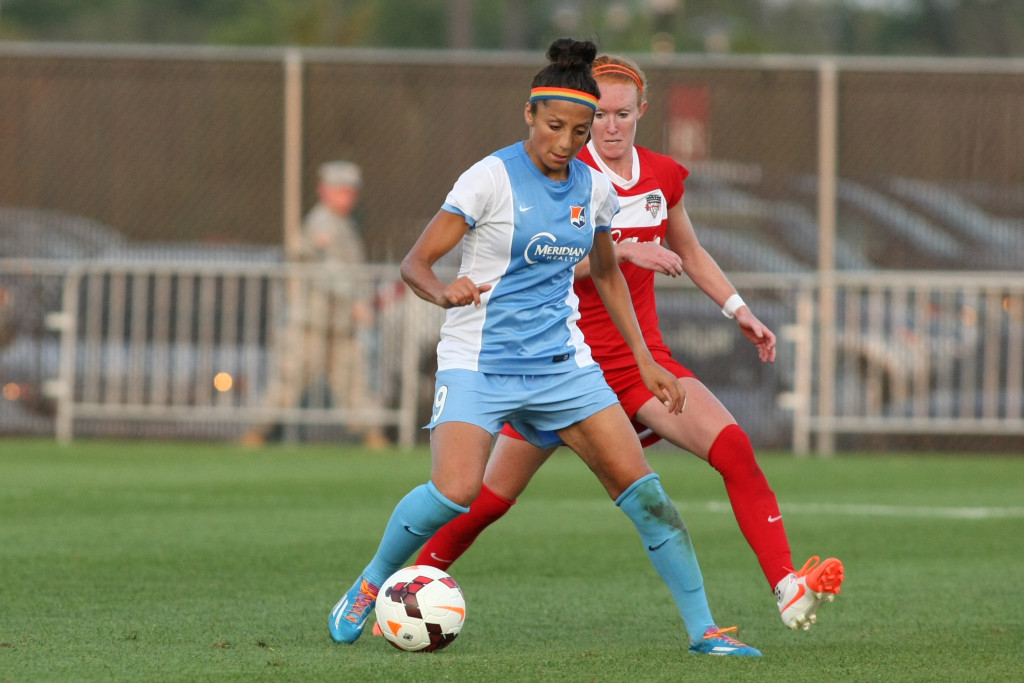 Nadia Nadim could become one of the most important players in the NWSL in 2015. (Photo Courtesy Sky Blue FC/Robyn McNeil)

BRICK, N.J. – Nadia Nadim is the most anticipated signing of the National Women’s Soccer League offseason.

Nadim scored seven goals in six matches at the end of last season to nearly single-handedly drag a stagnant Sky Blue FC team into a playoff race. She took the league by storm in the dog days of summer, scoring a hat trick against Houston and a brace four days later in Western New York early last August.

Sky Blue FC coach Jim Gabarra’s top priority this offseason was securing Nadim again, who joined on loan last year from Danish club Fortuna Hjørring. It took a while to make that happen, but it came together in mid-February when the New Jersey-based club officially obtained the 27-year-old’s rights. Returning to the Garden State was important to Nadim, too, who wants to play at a higher level.

“The games and training were much harder than I’m used to and that gave me a new motivation,” Nadim said at a recent training session on a cold, blustery day near the Jersey Shore. “And the people and my teammates here made a huge impression on me, so I wanted to be around them and part of the Sky Blue team again.”

Nadim, always smiling and sporting a rainbow headband, celebrates her goals with a karate kick at the corner flag and bit of joy that is tough to pinpoint exactly, but an element essential to her game.

“I love playing football,” Nadim said. “I play football because it makes me happy. And if I’m not happy, I’m not going to play well. For me, it’s a game – a game is supposed to be fun. It’s been fun and it’s always been fun and I’m going to try to keep it fun.”

Her jovial personality is evident throughout this early preseason training session, half a world from home. She was born in Afghanistan but has called Denmark home for most of her life after she, her sisters and their mother fled there as refugees to escape the Taliban, who executed Nadim’s father.

Amidst the emotions and changes, soccer was there to help Nadim adapt to her new surroundings.

“We were just out and running after that ball,” Nadim told espnW last year. “I think that’s how we improved our skills. We didn’t, like, train, we just played, having fun. That’s the best way to learn.”

She eventually gained Danish citizenship and is now a focal point of a Denmark team that is still on the rise. The Danes have picked up some eye-opening results of late, beating the United States at last year’s Algarve Cup and shocking Japan in this year’s edition.

Denmark, however, didn’t qualify for the World Cup and therefore cannot qualify for next year’s Olympics due to UEFA’s double-jeopardy qualification system, so Euro 2017 is the next major competition at which they can start to translate some of these results in meaningful competition.

“That is our next goal. We need to be a part of it,” Nadim said.

All the while she has been studying to become a doctor. She is through nine of 12 semesters at Aarhus University in Denmark, but Nadim says there is no rush to finish her schooling. She is working on procuring time for clinical research while she is playing in New Jersey this season (Meridian Health is Sky Blue FC’s presenting sponsor).

Nadim has the same go-getter mentality on the field. She is a pure finisher with a nose for goal, capable of scoring in the air or on the ground.

This season she is tasked with getting Sky Blue FC – champions of the last U.S. professional league, Women’s Professional Soccer, in 2009 – back into the playoffs, but she won’t be able to surprise any teams this year. Her breakout mini-season last summer is well-documented.

Success for Nadim and Sky Blue FC will be about much more than just her finding net. Sky Blue has traditionally been one of the lower scoring teams dating back even to the WPS days. Goal-scoring by committee has often had a negative connotation for Sky Blue, but this year that could be a positive if Nadim can rekindle chemistry with Maya Hayes in her sophomore year as a professional and with Katy Freels, who showed glimpses of brilliance in the past two seasons.

Sky Blue FC captain Christie Rampone played for the club in 2009 and 2010 in WPS and returns for her third NWSL season close to home. She led the triumphant and unlikely title charge in 2009 while playing pregnant and she has seen the highs and lows of the organization. Nadim’s return this year is a welcome sight; it brings an air of optimism to preseason that hasn’t existed in the past.

“Love having her,” Rampone said. “Obviously as a defender, [she’s] someone up top who can put the ball in the back of the net, but also challenges me at practice and makes me a better defender. She brings that 1-v-1 mentality that you don’t see very often any more. She’s taking you on at all times, so you have to be on your toes. She’s a great teammate, great person and I’m excited to have her back.”

If Nadim can elevate the games of those around her and combine with teammates – including U.S. international Kelley O’Hara when she isn’t away on World Cup duty – there will be less stress on her to be the sole scorer, but she will still need to carry that burden. And in a World Cup year where most other top players in the league will miss significant time, Nadim has the chance to be one of the most important players in the league. Not that pressure seems to bother her.