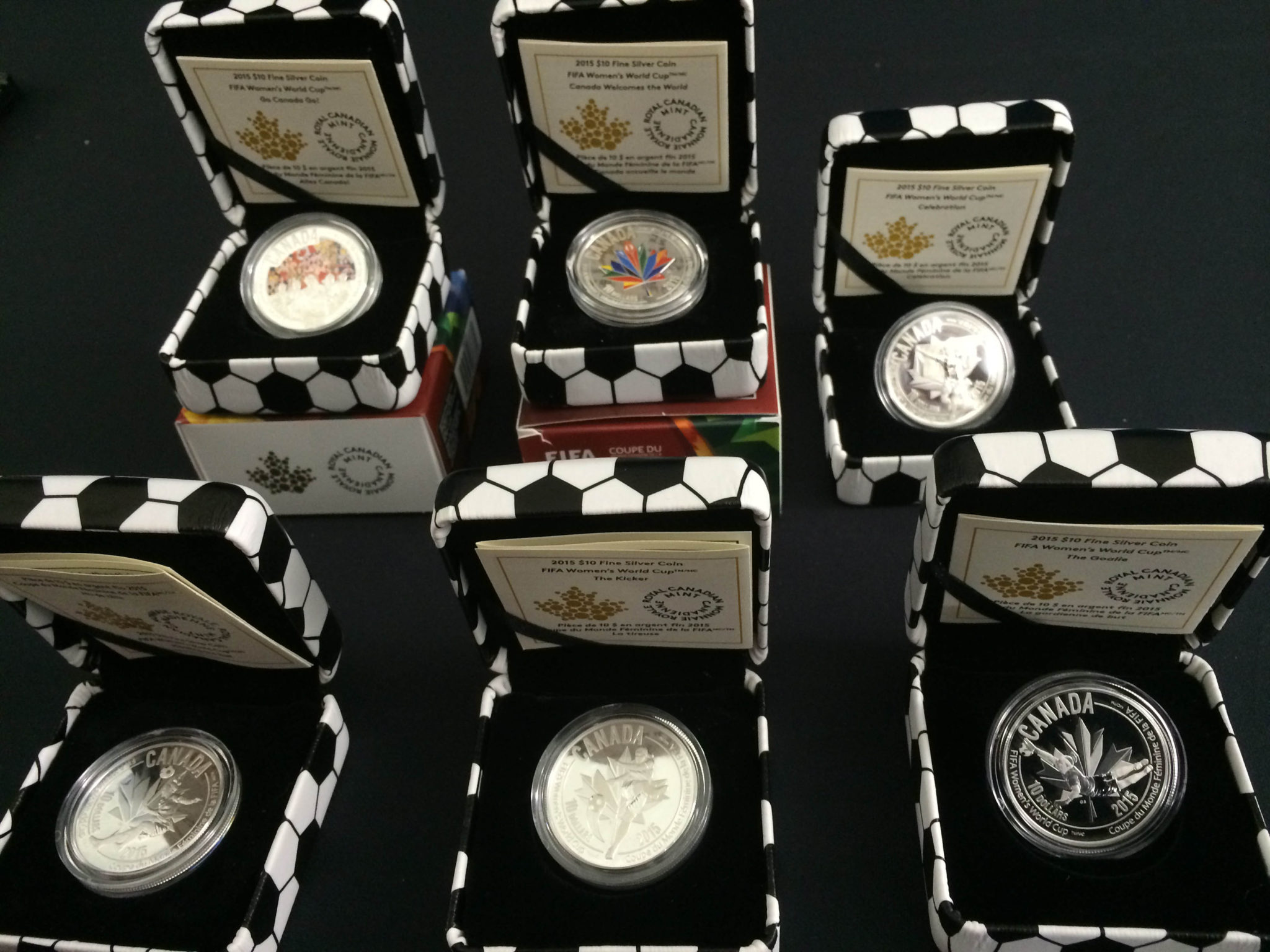 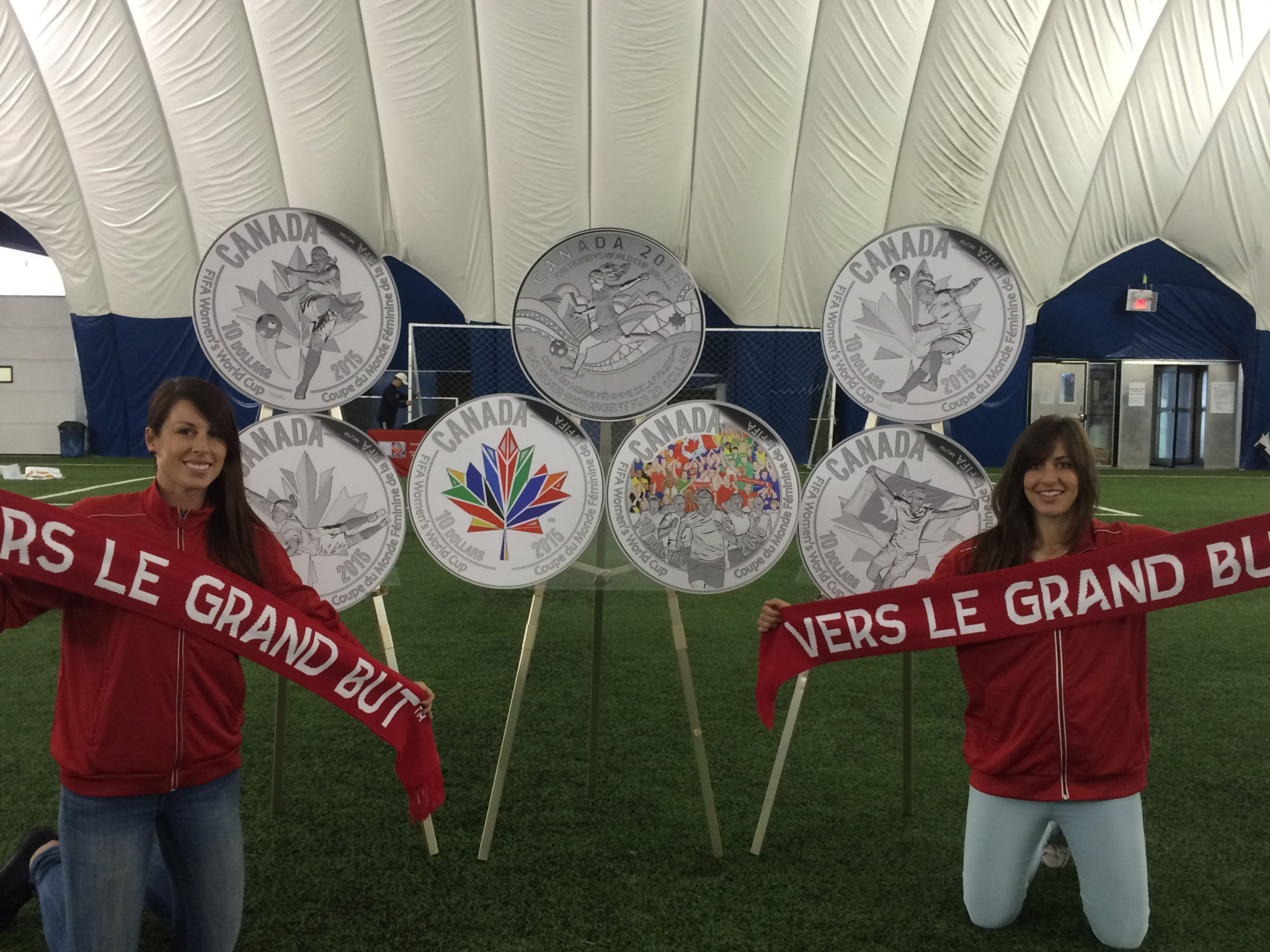 Panini will run a full sticker album as it did for the 2011 Women’s World Cup and recent men’s World Cups, as first detailed by The Equalizer.

A $20 for $20 fine silver coin was released last Wednesday and nine more coins will be released on April 7. Those include six $10 coins by Ottawa, Ontario, artist Greg Banning, two of which are colored coins. The priciest coins are the trio of pure gold coins, which cost $75 each at local mint shops or online at www.mint.ca.

Panini stickers and collector coins allows for those across the globe to collect items surrounding the Women’s World Cup.

Canada defender Rhian Wilkinson likes to collect a special item from each major event in which she plays. The versatile right back was beyond excited when talking about the Royal Canadian Mint Collector Coins.

“I’ve kept a jersey from each major event,” she said. “Releasing this coin, I think that’s so cool. There’s a female soccer player on the front of a coin, that’s unbelievable and exciting. I’ll keep that. I do keep things that are extra special.”

“Listen, there’s a female soccer player on the front of a Canadian coin. That’s mind-blowing and I’m so proud and excited about it,” she said.

Emily Zurrer was 16 years old when she earned her first international cap with Canada. Zurrer has something special that she collected from her first cap that she recently rediscovered at home. 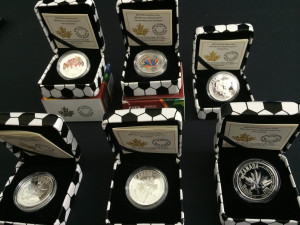 “I got the pennant from my very first cap when I was 16,” she said. “We played the U.S. in Nashville. I recently went home and had to clean out my closet and I found it there. It’s a pretty cool find.”

Even the smallest of items can mean the world to a supporter. Young fans can become interested and find a hero at a young age through a small event that has taken place. Ticket stubs were special for Emily Zurrer.

“I know when I was growing up and watching games like this, I kept every ticket stub I had,” Zurrer said. “I remember just collecting, it’s a good way just to keep a memento of something that was a really cool experience in your life.”

“I remember when I was a 12-year-old kid for the 1976 Olympics and I still have my coin collection and I have every one since,” he said. “I’m not a coin collector, but the only coins I do have are the ones when we have international events. Coin collectors will buy them for sure because that’s what they do. I think these types of things resonate with the general sports fan or general fan. I think they’ll be a big hit.”

The Panini sticker album will require a longer wait then the April 7 release of coins. The sticker album will have 478 stickers, 56 pages and a double-page spread for each national team. Each national team will have 17 player stickers, 1 team and 1 team badge. A roll of honour section showing the official poster, trophy, ball, mascot (Shueme), stadiums and venues will also be featured.

Panini Group Licensing Director Peter Warsop confirms via email that North America and Spain have a target release date of April 15. However this target date is not firmly set in stone. A few loose ends — including some player head shots — still need to be sorted and completed before being released for purchase. 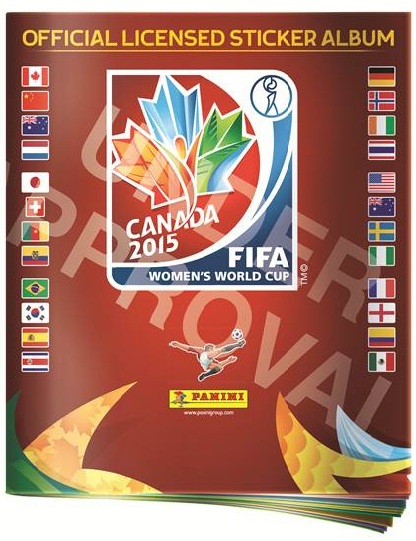 An initial rendering of the Panini sticker album. (Courtesy Photo)

Wilkinson and Zurrer both played for Canada at the 2011 FIFA Women’s World Cup in Germany and they remember how crazy and popular the Panini stickers were. Zurrer is excited for the fans.

“I remember in the last World Cup I was in, Germany 2011, we had those Panini albums,” Zurrer said. “I remember people going crazy for them. I think it would definitely be something really cool for people to collect.”

Rhian admits that she isn’t the biggest collector, but she knows a lot of people will be looking forward to collecting once again.

“We had Panini stickers for the last World Cup in Germany. I know a lot of people are very big collectors of it. We don’t have it as much in North America, but I hope it happens because there’s definitely collectors out there who want it to.”

The social media presence, emails and constant hounding by supporters in an effort to see the production of a 2015 FIFA World Cup Panini Sticker Album paid off. Your voice and pressure was heard and did make a small, but noticeable impact in the distribution and overall marketing of this album.

Peter Warsop describes merchandise agreements and the overall complexity of putting together a Panini album. It looks beautiful at the local newsagent, however a lot of work, details and approvals have to be made in advance before the finished product is ready. Warsop said that some of public inquiries about the sticker album were encouraging.

“Interest in the women’s game is becoming more widely acknowledged and we are hoping that will help sustain the efforts being placed on this project,” Warsop said. “The acid test will be if the supplies being produced and distributed do sell through to consumer level. When this does not happen it does rather spoil future prospects and can lead to scaling back projects to smaller collections with more limited distribution.”