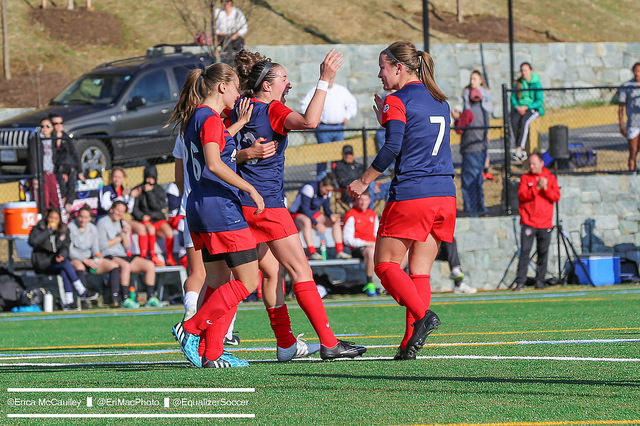 The Washington Spirit preseason schedule rolled on yesterday with a 4-0 win over the visiting Virginia Tech Hokies. Four different Spirit players — Estafania Banini, Amanda DaCosta, Christine Nairn and Laura del Rio — found the back of the net. DaCosta and Banini each also added an assist.

The offensive output was encouraging for Spirit fans given that the biggest question surrounding the team heading in the 2015 season is how they’d put the ball in the back of the net. During the game, the Spirit displayed an attractive style of play, kept the ball on the ground and managed to build out of the back with some success.

Head coach Mark Parsons admitted after the game that Saturday’s goal-scorers need to produce for the team moving forward.

“I think they are players that have to get goals for us,” Parsons said. “It was really positive that those guys got on the scoresheet… It was really exciting, the creating a lot of opportunities and different ways and I thought that ball movement and movement off the ball for this stage was really good. I think the biggest task now is keeping that standard.”

Of course, it’s important to put preseason results in context. The Hokies lost four key contributors from last fall, including two of members of its backline. Virginia Tech did return four of its top five goal scorers and the Spirit managed to hold the Hokies to a total of five shots, and only one on target.

Most of Virginia Tech’s chances came when they managed to intercept a pass in the Spirit’s defensive half of the field. Midfielder Ashley Meier recorded the Hokies’ best chance in the 74th minute, but her shot went just wide of the net.

The Hokies, whose lineup could nearly match that of a basketball team in terms of height, played a very physical game. The Spirit, who are noticeably lacking in this attribute, were not overpowered often and did not allow the physicality to impact their style.

Next on tap for the Spirit is the Virginia Cavaliers, who play possession style soccer arguably better than any college team in the nation. Parsons is looking forward to playing the 2014 College Cup finalists next weekend.

“There’s not many teams that play soccer the way they play soccer,” Parsons said of Virginia. “I think we’re going to have a very possession-oriented (match) and it’s going to be tough to try to get the ball back off them.”

Washington will face off against Virginia at 7 p.m. ET on Saturday at the Maryland Soccerplex.

Caprice Dydasco did not participate in the game against Virginia Tech after suffering a minor muscle strain. Parsons said that she should be back to full training when the team resumes practice Tuesday.

The Spirit’s new international player has officially signed with the team. The signing is expected to be announced by midweek.

Boston opened up preseason with a 4-0 win over Boston College on Friday behind a pair of goals from Maddy Evans and one each from Suzane Pires and Bianca Brinson. The Breakers soon after boarded a plane to Florida for an eight-day preseason trip that will feature two matches against the Jamaican national team.

Chicago narrowly defeated the University of Wisconsin-Madison, 1-0 on Saturday on a 2nd-minute goal from rookie Danielle Colaprico.

The Thorns were held scoreless through 70 minutes by the University of Portland Pilots on Saturday, but the NWSL side exploded for four goals in 12 minutes down the stretch for the 4-0 victory. Allie Long scored on a penalty kick and trialist Kelsey Haycook scored five minutes later — three minutes after entering the match — to double the lead. Trialist Meredith Speck and defender Kendall Johnson also scored.

Sky Blue FC defeated the University of North Carolina, 1-0 on Saturday on a 6th-minute goal from Katy Freels.