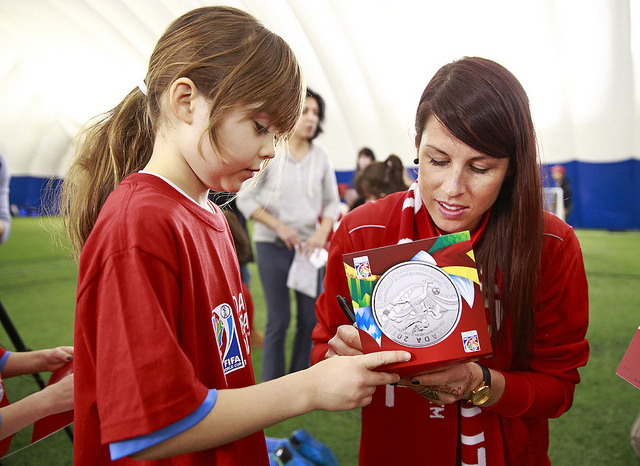 Emily Zurrer says Canada is confident in this final stretch ahead of the World Cup. (Photo Courtesy Canada Soccer)

Vancouver, B.C – John Herdman and his Canadian national team players are returning back to residency training in Vancouver this week after an exciting few weeks abroad. Canada had a tremendous Cyprus Cup but finished runners-up to England. Players have since been enjoying a brief spring break.

“It was really great,” the 27-year-old defender said. “I think we grew a lot as a team both on and off the field. It was a really good two weeks for us. We came along way. It was disappointing to lose in the final, but I think the performance was something to be proud of.”

Canada players hope their 2015 success to date will help lead them thrive at the World Cup. The red and white have established a combined record of 6-1-0 at the Four Nations and Cyprus Cup. Canada has out-scored opponents 10-4 and that doesn’t include a closed-door 2-0 scrimmage victory over Australia.

Winning ways kicked off in China when Canada ran the table with a trio of 2-1 wins over Korea Republic, Mexico, and China in early January. Captain Christine Sinclair looks to have shaken away her 2014 scoring woes and 17-year-old Jessie Fleming tallied her first international goal and also a sending off during the Cyprus Cup tournament play.

John Herdman has his team focusing on tactical play and the importance of ball possession. Canada seems quite comfortable playing in a 4-2-3-1 formation. Zurrer has noticed how much the team is coming together, building chemistry and cohesion both on and off the pitch.

“It’s a lot about connection for us,” Zurrer said. “We want to be the most connected team both on and off the field, and we’ve always been a really tight-knit team to start with. I think we’ve really been growing more and that’s something that we always take pride in. Right now we’ve put in all the heavy work, mostly fitness and hitting the gym. There’s going to be more of that, but now it’s more tactically focused based.”

Canada will look to continue momentum on April 9 against France at Stade Robert-Bobin Evry in Bondoufle, France. France coach Philippe Bergeroo and his banged-up Les Bleues team are currently ranked No. 3 in the world. Canada sit at No. 9 and will hope for a positive climb in the final FIFA rankings before the World Cup. Those rankings will be released on March 27.

Canadian supporters in Ontario will be circling on May 29, when the final home fixture for Canada will be played. Canada will take on England at Tim Horton’s Field in Hamilton, Ontario.

“It was part of the planning process with John (Herdman),” Canadian Soccer Association president Victor Montagliani said of the England match. “He always wanted so many games leading up to the World Cup, so this is just part of it. We always knew we wanted a game on that date at the end of May. We were talking with a few countries and it all depends on when they were coming to Canada for the World Cup. We had to match it up with there schedule and England was a country that was coming at the right time in terms of coming for their own camp pre-World Cup. I think it’s a very good match for both teams, because both teams are favoured to move past the first stage. I think it’s a good match for both teams to prepare.”

According to all reports and on lookers in Cyprus, it was Canada that dominated but failed to score against England in the 1-0 Cyprus Cup final loss. Lianne Sanderson’s goal against the run of play caught Canada’s young defenders off guard. Zurrer is looking forward to a rematch and believes Canada will be able to get one over on No. 6 ranked England, in Canada, on home soil.

Zurrer senses a friendly rivalry brewing between the English and Canadian players. Demi Stokes and Siobhan Chamberlain both spent time playing for the defunct Vancouver Whitecaps Women, and Desiree Scott recently took her talents to Notts County in the FA WSL last season. Players like Zurrer, Scott, Stokes and Chamberlain all get along great with each other off the pitch.

“There’s a rivalry and it’s funny because we’re also friends with a lot of them off the field,” Zurrer said. “We stay in the same hotel usually with them in Cyprus, so there’s a bit of banter and talking leading up to the game. They’re a team that we always have fun playing and we always look to beat, but then we’re usually friends afterwards.”

The Canadian Soccer Association had relayed to the press that all six World Cup stadiums would host a fixture before the World Cup. Ottawa and Montreal have yet to host a pre-tournament match and that left pundits, supporters, and everyone puzzled when the City of Hamilton was named as the venue for the England match. Canada Soccer President Victor Montagliani tried to fill in all the blanks.

“The two venues that we didn’t have specifically a World Cup (international friendly) match (Ottawa and Montreal), we were still able to test the facility in other ways,” he said. “We still did what we needed to do from an operational side. It just didn’t fit from a timing perspective, whether it was then venue itself, they had other things going on at the time, or it wasn’t right with our schedule. Unfortunately we weren’t able to get six for six, but I think we got four for four. Those other two venues were tested with other type of events.”

World Cup stadiums in Vancouver, Edmonton, Winnipeg, Ottawa, Montreal, and Moncton were all unavailable to host the Canada vs England fixture. FIFA has taken over all six stadiums with a massive cleaning project. Montagliani talked about the difficulty in securing a World Cup stadium for this match.

No matter where or in which stadium Canada plays France and England, they will be ready. Canada is progressing and making the correct strides to improve and get better in preparation for the World Cup.