The Lowdown: Amid retirements, Johnson returns 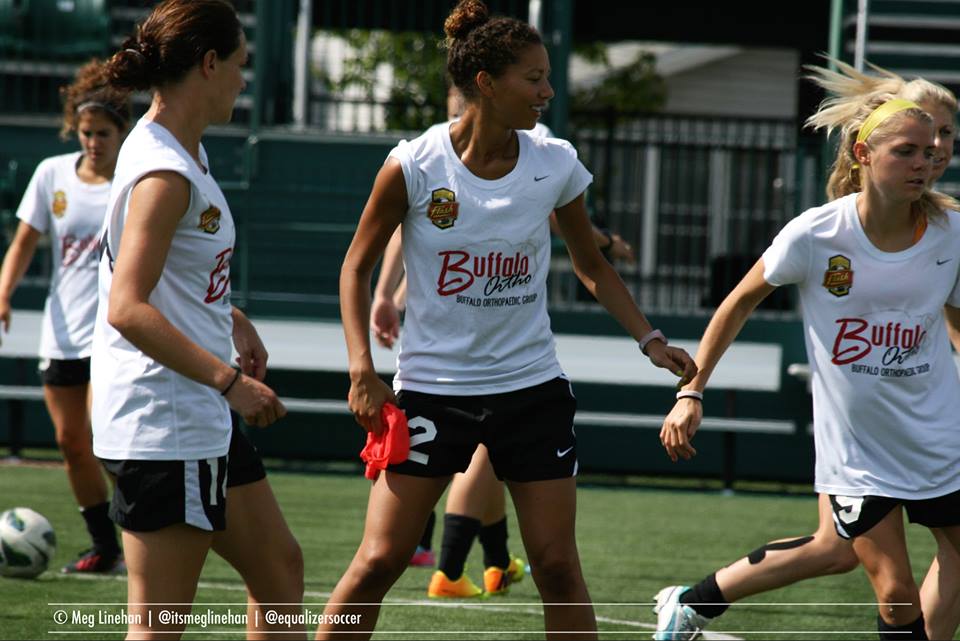 Estelle Johnson (center) is back in the NWSL after taking a year off to focus on finishing her master’s degree. (Photo Copyright Meg Linehan for The Equalizer)

A disturbing theme in the National Women’s Soccer League has been the spate of retirement announcements by players well shy of their 30th birthdays.  The reasons are varied and personal but most come down to the realization that playing in NWSL is neither lucrative nor full-time.  An NWSL spokesperson said that while the league has no current comment on the situation, the issue is being treated as a priority by new commissioner Jeff Plush.  At least one player, though, is going the opposite direction this spring.

Estelle Johnson thought her career was over when she decided not to play for the Flash in 2014.  After a storied career at Kansas, she was drafted by the Los Angeles Sol and wound up on the Philadelphia Independence after the Sol disbanded.  There were two seasons in Philadelphia, and then WPSL Elite, and finally a season with the Flash.  And then grad school came calling.  She was 25.

“The main reason I didn’t play is (that) I was in the middle of finishing a masters and I only had six months left of it,” Johnson said in a recent phone interview.  “That would have been half of the season with the Flash.  So I just kind of shifted my thoughts to education and setting myself up for my future after soccer.”

It is a story that has been told before.  Jazmine Reeves left the Breakers to take a job offer she couldn’t refuse.  Courtney Jones left to pursue her own business opportunities.  Taylor Vancil did the same.  When Johnson decided not to play last season, coming back was not part of the plan.

“I thought I was done,” she said, chuckling.  “As much as I hated missing last season, my teammates, all of that, I just thought I was ready to move on.  It turns out I wasn’t quite ready.”

Simply put, Johnson said she just missed playing too much.  “I knew it,” she said, “I would say a few months into the 2014 season.  But I felt like I had kind of given up my window and decided that I should just try to move on.  But when this opportunity came up I jumped on it.”

[THE LOWDOWN: A look at the financial realities of NWSL players]

The opportunity was to play with the Spirit in Washington.  Johnson had nothing but praise for the Flash, her time in Western New York, and coach Aaran Lines.  But she thought being near Washington, D.C. would better suit her business aspirations.  For the moment she is immersed in soccer but Johnson has not ruled out taking a part-time job in the area or to remaining there through the offseason.  For their part, Johnson said the Flash did what they could to accommodate her, making a recent trade that sent Toni Pressley back to Rochester, N.Y.

“I just missed it too much,” Johnson said, expanding on the reasons why she came back.  “I missed competing.  I missed winning.  I don’t think there is any environment that can quite compare to what we’re doing.”

Johnson said she missed winning, but she also referenced the lack of winning—as in championships.  So far the Colorado native has played three seasons in the top flight and been to three finals.  The three matches played out quite differently.  The main similarity—Johnson’s teams lost.

“A lot,” she said about how much the burn of being runner-up three times out of three drove her back to the professional league.  “In speaking with Mark (Parsons, Spirit coach and general manager) early on when we first started talking about me coming to Washington, one thing I told him was I want a championship.  I don’t want to walk away as another finalist or anything less.  So we’re going for it.”

The three finals went something like this.  In 2010 a weary Independence team was thrashed by FC Gold Pride.  The next year, on more even terms, the Independence lost on penalties to the Flash after several missed chances in extra time by Amy Rodriguez.  In 2013, Johnson was on the Flash when they were unable to capitalize on a woman advantage for the final half-hour in a home loss to the Thorns.

“I try not to think about them honestly.  It’s an emotional thing.  You work for seven months towards one thing and to be so close and not get it is pretty heartbreaking.  When I was with the Flash I definitely felt that it was the one so I guess I would have to say that was the most heartbreaking because of that reason.  I thought third time a charm.  But it didn’t work out that way so we’ll go for a fourth.”

Johnson stayed in reasonably good shape during her year off but said only in the last few weeks before preseason did she amp up her regimen.  Still she admitted the first two days were a bit of an adjustment as she works her way back into soccer shape.  “Not there yet.  Hopefully once I get my legs going…”  And there is no indication yet as to how Parsons will deploy Johnson once the season opens next month.

“We have a lot of good defenders, a lot of good players in general,” she said.  “Either way we’re going to be a successful team, we just have to put it together in the right way.  But I trust Mark to do it to the best of his ability.

“I’m just here to work hard and get on the field and I’ll play wherever he needs me to play.”

And after a season off from the game she loves, Johnson now says there is no exit strategy 2.0 to stop again.  Then again, she added, “You never know where the world will take you.”

These players will not be playing in the NWSL this season (international absences not included):

Jazmine Reeves, Boston Breakers:  She scored seven goals as a rookie in 2014 including a memorable hat trick against the Thorns but walked away to take a job at Amazon that she said she, “simply could not pass up.”  She was one of the few major building blocks in Boston last season and will be missed.

Courtney Jones, Boston Breakers:  Jones was clearly torn on whether to retired or take on a yet to be disclosed business opportunity.  Conversations with coach Tom Durkin and general manager Lee Billard in the fall persuaded her to get into the best soccer shape of her life, but a change of heart over the holidays led her to hang up the cleats.  A solid if not spectacular player the likes of which NWSL needs more of.

Nikki Washington, Boston Breakers:  She seemingly played every position other than goalkeeper and she did it for more than a few teams during a WPS and NWSL career that began as part of the master draft class of 2010.  Washington, 26, did not offer a reason for retiring.

Nikki Marshall, Portland Thorns FC:  Marshall was undecided about playing in 2014 electing to give it another go after being traded from the Thorns to the Spirit, then the Reign, and finally back to the Thorns all during the offseason.  Sadly her last moment as a professional was tearing her ACL during the Thorns regular season finale.  To that point she started every match in over the Thorns’ two seasons.

Taylor Vancil, Chicago Red Stars:  The second goalkeeper taken after Adrianna Franch in the 2013 draft, Vancil proved a worthy understudy to Erin McLeod in 2013 and Karina LeBlanc in 2014.  She looked ready to take the reins this season at least until LeBlanc finished up with the World Cup and her absence will leave the Red Stars with a significant hole to fill in goal.

CoCo Goodson, Sky Blue FC:  By the calendar she was the last player who started in opening day 2013 to be subbed out of or miss a game (Jen Buczkowski played more minutes).  A physical defender who could move up top to win aerial balls late in matches, Goodson would have been a major part of Sky Blue’s defensive set up.

Jillian Loyden, Sky Blue FC:  More accomplished than the others on this list, the one-time U.S. national team keeper called it quits in order to focus more time on her foundation that works to aide children in need and of help with domestic violence.  Her NWSL career was choppy thanks in part to a broken hand in 2013 preseason, but her loss will heap loads of pressure on Brittany Cameron to carry the day in the 18.

Jenna Richmond, FC Kansas City:  Richmond is getting married this year and has elected to skip the season.  The club is adamant she is not retiring.  As a rookie last year Richmond became a fixture in the FC Kansas City midfield and helped the team win the championship.  Look for Yael Averbuch to get the first crack at Richmond’s spot this season.

Nikki Phillips, FC Kansas City:  Phillips got married in 2013 before returning and helping FCKC win their title.  Now she is pregnant.  The soccer playing mom is barely a news item these days, but Phillips has not said whether or not she will play again.