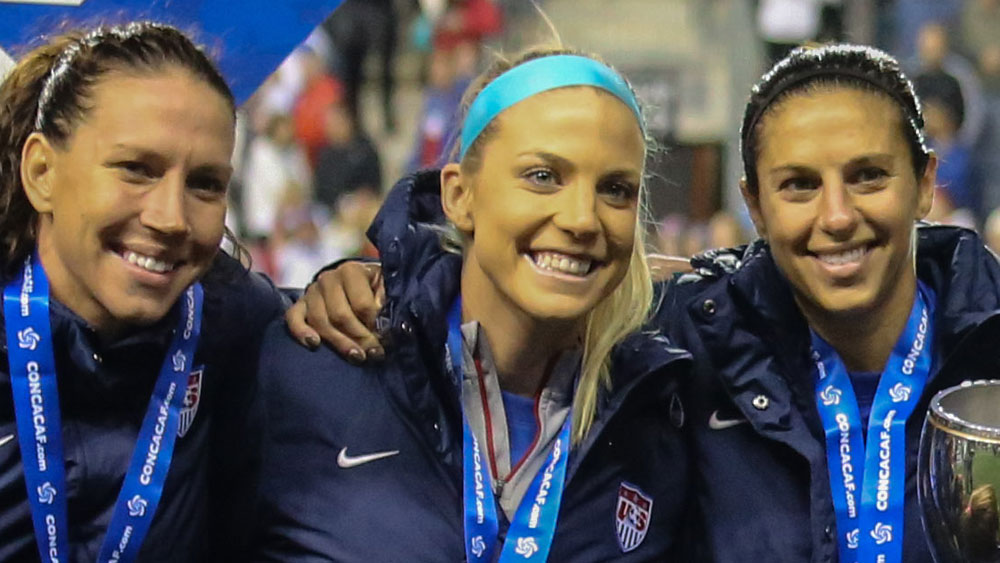 Success is no surprise for Julie Johnston.

That Johnston would be a star at senior level one day has been obvious for several years. Translating accolades at the youth or college level to the senior ranks is never a given, of course, but the main questions surrounding Johnston involved where she would play on the field, not if she would be good enough.

Johnston played just about everywhere for Santa Clara University from 2010-13, most memorably in the final third of the field, scoring 31 career goals. But in 2012, she captained the United States U-20 team to a World Cup title as a defender, leading a classically resilient American side from near-group stage elimination to an unexpected title, avenging a 3-0 group-stage drubbing to Germany with a 1-0 victory in the final. The Americans did all this after losing star striker Lindsey Horan to a knee injury just before the tournament.

On Wednesday, Johnston announced herself to the greater world at the senior level, scoring her first goal for the U.S. women’s senior national team on a headed-in set piece, the Algarve Cup-winning goal in a 2-0 win over France. Johnston started three games at the Algarve Cup, ordaining herself as a viable option for U.S. coach Jill Ellis at this year’s World Cup and providing a glimpse of the United States’ future. ‘Where?’ – not ‘If?’ – is once again the question.

Johnston, 22, has just the right balance of attacking fortitude and defensive prowess to hold down the position that the United States has long ignored: holding midfielder. For now, however, Johnston finds herself as another option for Ellis at center back, providing depth behind Christie Rampone, Becky Sauerbrunn and maybe Whitney Engen. Rampone will turn 40 years old during the World Cup and hasn’t played yet in 2015 due to an ailing back injury that is apparently worse than initially thought. Engen picked up a hamstring injury at the Algarve Cup.

As narrative so often goes before World Cups, timing is everything. 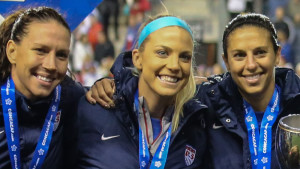 Julie Johnston’s (center) breakout performances came at just the right time ahead of the World Cup. (Photo Copyright Erica McCaulley for The Equalizer)

“The experience was great,” Johnston said after beating France. “I’m very thankful to even have the opportunity to be on the field and be able to play. I’ve learned a lot watching these players and playing with them every single day, so to be able to play with them in games like these is unbelievable. It’s definitely a dream come true.”

That experience which Johnston gained at this Algarve Cup is obvious. She had only one career start in 218 minutes played prior to this Algarve Cup, and that was almost two full years ago under then coach Tom Sermanni.

In one week, Johnston doubled the number of minutes under her belt at the senior level, scored her first goal and seamlessly established herself a partnership with center back Becky Sauerbrunn, one of the best in the world. There is still work to be done – cutting back on the number of long balls being the main criticism – but Johnston’s play didn’t exude any cause for concern.

“She’s had an amazing tournament,” Ellis said after Wednesday’s win over France. “Opportunity has knocked and she’s responded really well. It makes our job hard but in a way makes our job easy because now we’ve got great depth at that position and now she’s gained experience that she didn’t have in these games. I’m really, really proud of her and happy for her.”

Johnston wasn’t even supposed to be on the United States’ World Cup qualifying roster in October, but a late injury to her friend and former U-20 teammate Crystal Dunn provided Johnston a chance to be at that tournament, though she didn’t play. She only played in passing in a four-game tournament in Brazil in December, earning 31 minutes in a 1-1 draw with China.

Johnston was the 2014 NWSL rookie of the year, playing as an adventurous center back who made forays forward for the Chicago Red Stars while anchoring a defense that allowed 26 goals in 24 matches, second best in the league. That she would quickly succeed at the professional level was never really a question.

Now, though, Johnston has to be in Ellis’ mind as a viable option at center back this summer and, although Ellis is yet to use Johnston – or anyone – in a holding role, a defensive midfielder to be a fifth defender late in matches if the U.S. is leading.

Make no mistake: Christie Rampone is the captain of this U.S. team and still exceptional at reading the game. Rampone will start at center back for the U.S. – alongside Becky Sauerbrunn – in Canada if she is healthy. But the potential for seven games on turf – with what’s been described as a back injury – could take a toll on the 40-year-old-to-be Rampone. Johnston, now along with Engen, can provide needed coverage in the event of fatigue, injury or even suspension, all of which are very much possible. (Remember when Sauerbrunn wasn’t even a regular for the U.S., but filled in for Rachel Van Hollebeke (then Buehler) after Buehler was sent off in the quarterfinals against Brazil for bringing down Marta in the box? Sauerbrunn’s full 90 in that 2011 semifinal win over France remain her only World Cup minutes to date.)

The Algarve Cup was a major test passed for Johnston, who couldn’t have predicted before her flight to Portugal that Rampone and Engen would both be held out with injuries. But Johnston adapted exceptionally and stepped up, as was to be expected.