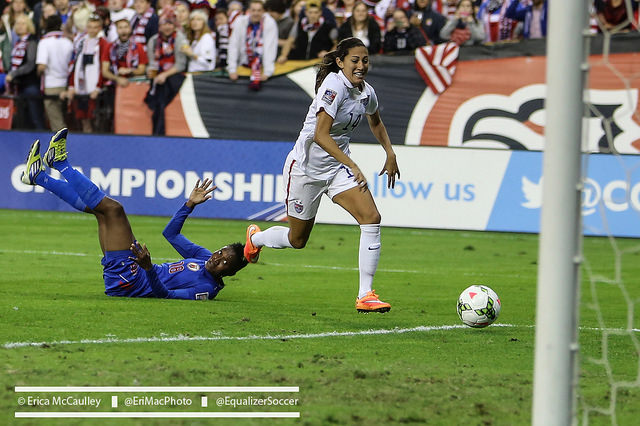 All is not broken.

Under continued scrutiny following a 0-0 draw with Iceland on Monday, the United States women’s national team beat France, 2-0 on Wednesday in Portugal to win a record 10th Algarve Cup title. With the win, the U.S. avenges its 2-0 loss to France on Feb. 8. It’s the first trip-up for France in some time. France entered the match as the hottest team in the world, beating Brazil, Germany, Japan and the United States in the past five months.

Hope Solo saved Amandine Henry’s penalty kick in the 81st minute to keep France off the board.

The U.S. made the necessary adjustments — albeit against a weakened France side — to win a game that will give the Americans a confidence boost in what was their greatest remaining test ahead of the World Cup with only second-tier teams remaining on the spring schedule.

No U.S. player improved her stock more at the Algarve Cup than defender Julie Johnston, who capped off a solid tournament with her first international goal, the game-winner in the final against France. Johnston is still assimilating to the game at the senior level, evidenced by a propensity to play the long ball a bit too often – which is also a product of the system. Johnson is also versatile enough to step into a holding role when needed, a trait that U.S. coach Jill Ellis loves. Where Johnston fits into the team when Christie Rampone and Whitney Engen are healthy remains unclear, but as resume builders go, this Algarve Cup was a home run.

France owned the U.S. in the midfield in February, both centrally and on the flanks. Wednesday was a different story as Lauren Holiday and Morgan Brian played off each other well and provided cover and balance. The U.S. also clogged the midfield defensively, with Carli Lloyd pinching in centrally from her still forced wide role. And Christen Press scored an incredible goal and continues to prove she will be one of the most important players for the United States at the World Cup, capable of being dangerous in front of goal, wide or withdrawn behind the forwards. Credit to Jill Ellis, too, who learned from last month’s loss and made the necessary adjustments to win on Wednesday.

This wasn’t best France side

France’s absences may be viewed as excuses, but they are reality. Johnston’s goal doesn’t happen with France’s first-choice center backs – Laura Georges and Wendie Renard – in the game. Given the way Georges bottled up the U.S. attack last month, Press’ goal may not have happened either, but the breakdowns there came in the midfield. Louisa Necib is also still injured. Some will point to this loss as a reminder that France can never win ‘the big one,’ but it could serve as a necessary humbling ahead of the World Cup. Sometimes, losses can be good. As is the case for the U.S., what really matters is what happens in June and July.