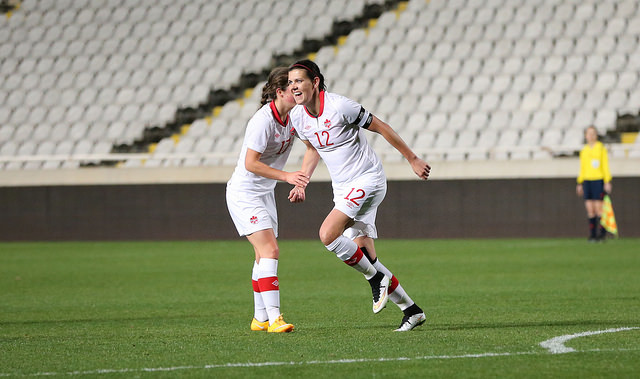 Canada’s dream of winning a World Cup on home soil this summer will require every little piece of the puzzle to come together at exactly the right time.

The aspiration is a long shot. Unlike some of the more talented teams in the world, which can find ways to make up for injuries or dips in form to players and still win the World Cup, Canada needs each and every piece clicking.

A decent draw was the first part of the equation. Canada got that not as much from its own group but from how the knockout stage sets up; finishing first or second in the group allows for an easy path to the quarterfinal and even a decent one to a semifinal.

Sophie Schmidt must continue to stay in form, youngsters Kadeisha Buchanan and Jessie Fleming will need to grow up quickly and Erin McLeod will have to make a few match-altering saves in goal.

Midfielder Diana Matheson tearing her ACL in October could be the key injury that holds back Canada, if she isn’t ready to play in time for the World Cup.

All of those elements are symbiotic, but the most essential need for Canada is Christine Sinclair being in form and confident come June. Luckily for Canada, the country’s all-time leading goal-scorer and third-best scorer in world history is on fire at just the right time after two relatively quiet years. She scored against Korea Republic on Friday for her fifth goal in as many matches this year, lifting Canada past Korea Republic at the Cyprus Cup (Sinclair also scored a sixth in an unofficial scrimmage against Australia earlier this week).

Look no further than the 2012 Olympics for evidence of how important Sinclair is to Canada. She finished top scorer at the tournament with six goals in as many games, helping Canada win the bronze medal. Her hat trick against the United States in a 4-3 extra-time semifinal loss was one of the greatest individual performances ever in the most memorable and entertaining match of this generation.

Sinclair played possessed in that match, eyes on fire, answering two different U.S. equalizers with go-ahead goals. Save for the latest goal in FIFA history in extra time and one of the rarest, most perplexing officiating decisions in regulation, it would have been enough to improbably lift Canada into the gold-medal match. Sinclair had cemented her stake in Canadian history as one of the country’s best athletes ever, winning Canada Athlete of the Year.

Sinclair exited that semifinal tied with U.S. striker Abby Wambach — who scored once in that game — for second on the world goal-scoring chart with 143 career international goals.

And then everything largely dried up.

The Canadian captain scored four goals in 2013 and only one in 2014. She and Wambach both scored on Friday in different games, bringing their respective goal hauls to 153 and 178 (Wambach is the all-time world leader; Mia Hamm scored 158).

Sinclair scored 15 goals in 43 games for Portland Thorns FC in 2013 and 2014, often drifting deep into the midfield to get on the ball as she went long stretches — both in matches and across several weeks — trying to find her scoring touch. To Sinclair’s credit, she acknowledged some of her dry spells in their moments but never showed signs of being rattled by any slumps. But the struggles were real, exemplified by Thorns coach Paul Riley pulling her from the NWSL semifinal when Portland was trailing.

Now, three months from the World Cup, Sinclair is on fire again. All five of her goals this year have come against second-tier opponents, but the scoring trend is a crucial one for Canada if it is to have any success at the World Cup.

Sinclair showed in 2012 that she is capable of taking the team on her back and carrying it to the podium.

In 2011, she also showed how important she is, but in another way. She broke her nose in the opening match and, along with the rest of her teammates, never got into a rhythm as Canada finished last of 16 teams, scoring only one goal (Sinclair’s).

Replicating that third-place finish from 2012 looks increasingly tough with the progression of France and Brazil among other world powers. But if Sinclair — the most important piece of the Canadian World Cup puzzle — continues to score at this rate and the other pieces can come together around her, Canada at least has some hope of making a deep run on home soil. Without Sinclair playing out of her mind — plus the aforementioned pieces coming together — Canada’s dream of winning the 2015 World Cup won’t be anything near reality.