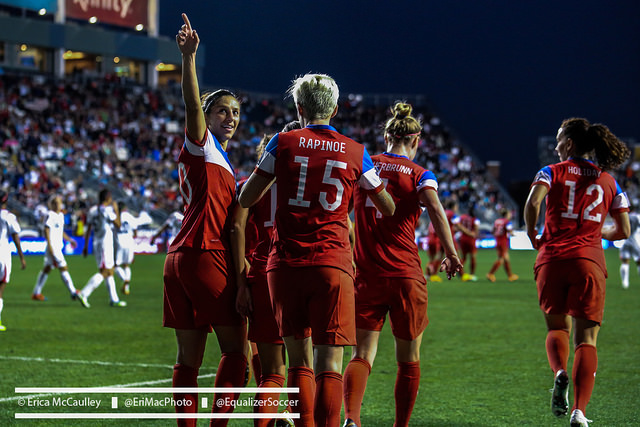 The United States women’s national team opened the 2015 Algarve Cup with a 2-1 victory over Norway on Wednesday in Portugal behind two goals from Carli Lloyd.

Lloyd scored on a rocket in the 57th minute to equalize and she scored the game-winner on a penalty kick five minutes later. The U.S. dominated the first half but failed to score, conceding the opening goal to Ada Hegerberg in the 44th minute. Christen Press sent a shot off the post from 25 yards out in the 15th minute.

The win, which came in Hope Solo’s return from suspension, offered signs of encouragement for the U.S. women, who opened 2015 with a loss to France and an uninspiring victory over England.

These are three takeaways from the United States’ 2-1 win over Norway:

England sat in against the United States women and challenged them to play in last month’s game. The plan largely worked, with the Americans looking uncreative and impatient as they tried to break down England’s 10 players behind the ball.

On Wednesday, Norway did much of the same, managing to take the lead before halftime and nearly steal a result. England deserved a draw last month, having had a goal called back for being scored from an offside position, although replays showed otherwise. Teams have figured out that this U.S. team isn’t yet one that will quickly move the ball around and creatively break down teams that sit in. The evidence is there from England, Norway and even Trinidad and Tobago in World Cup qualifying.

All that said, the U.S. looked much more comfortable on the ball against Norway and showed encouraging signs of combination play. It was a good start to the tournament and a way to build momentum heading into Friday’s match against Switzerland.

Coupled with Norway’s patience on the goal was the Scandinavians’ ability to exploit the major weakness of Jill Ellis’ 4-2-2-2 formation: the flanks. The United States’ new formation, which forces Carli Lloyd and Christen Press to play tucked-in wide midfielder roles, is very narrow. Offensively, it requires the outside backs to get forward into the attack, which Ali Krieger did well on the right side on Wednesday.

But defensively, it allows teams to easily overload the flank. Norway’s goal was a result of left back Lori Chalupny being left 2-v-1 on the left side, an event that will increase in frequency without traditional wingers, something the U.S. has in Megan Rapinoe and Tobin Heath, among others. The narrow shape isn’t unheard of, but it will put more stress on a fullback position that collectively may not be ready for that pressure.

Here are today's #USWNT starters for the 2015 Algarve Cup opener vs. Norway in Group B from Vila Real de San Antonio: pic.twitter.com/HWjkxFyps0

Hope Solo returned to the United States women’s national team after missing the matches against France and England while serving her 30-day suspension for a training camp incident. She dropped a cross in the 4th minute that she should have punched away – leading Ali Krieger to make a goal-saving block – but Solo recovered from that initial error to make an incredible save from point-blank range in the 54th minute, three minutes before Lloyd’s equalizer. Solo couldn’t do much about the goal. Hegerberg was left unmarked about seven yards from goal and her header bounced off the bottom of the crossbar.