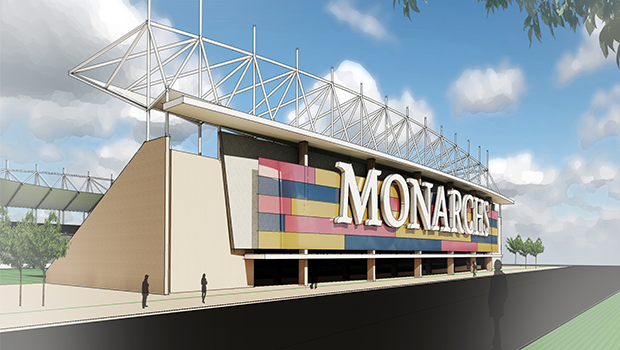 A rendering of the Real Monarchs stadium outside of Salt Lake City, which could host an NWSL team. (Courtesy Photo)

A week after an agreement with the Utah State Fairpark for a stadium fell through, Real Salt Lake owner Dell Loy Hansen signed a letter of intent with West Valley City, Utah, to build an 8,000-seat stadium for a USL team and potentially for a National Women’s Soccer League team.

The USL Real Monarchs begin play in the USL this year and will temporarily play at Rio Tinto Stadium, home of the MLS club. The stadium proposed by Hansen and the RSL ownership group could be ready by July or August 2016. Part of the plans for the stadium include a professional women’s soccer team. RSL president Bill Manning said that on Monday he and Hansen met with NWSL commissioner Jeff Plush, who used to work for RSL rival Colorado Rapids.

Mock-ups of the new @RealMonarchs stadium in West Valley City. #RSL is in the house. pic.twitter.com/BcjyXjYX8C

Chris Kamrani of the Salt Lake Tribune reports that Hansen “is seeking a 40-year lease with two potential five-year extensions on top of it.”