Herdman: Matheson’s recovery ahead of schedule 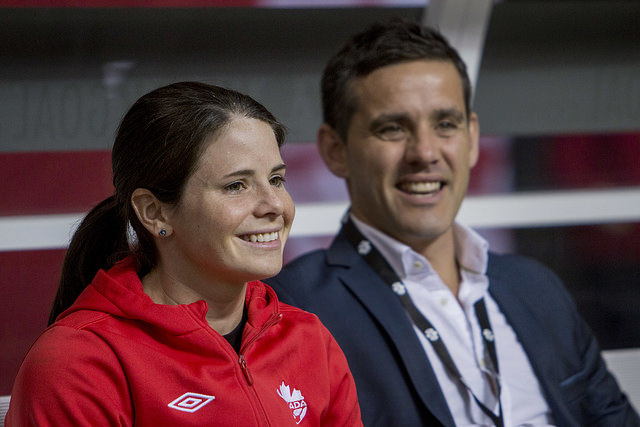 Diana Matheson is ahead of schedule in her recovery from a torn left ACL, according to Canada coach John Herdman. (Photo Courtesy Canada Soccer)

Canada coach John Herdman said Diana Matheson is ahead of schedule in her recovery from a torn left ACL, but there is no timetable yet on her return.

“Diana, she’s one of the most resilient women that I’ve ever met,” Herdman said on Tuesday from Cyprus, where his team will kick off the Cyprus Cup on Wednesday against Scotland. “Her recovery is ahead of schedule at this stage. We all have our fingers crossed and I think everybody wants to see her back.”

[MORE: Canada blanks Australia in friendly ahead of Cyprus Cup]

Matheson tore her ACL against Japan in October, about seven months prior to the World Cup. The injury occurred on the artificial turf at Edmonton’s Commonwealth Stadium, one of the six World Cup venues to be used later this year. That turf is being replaced prior to the tournament to meet FIFA regulations.

Matheson, 30, has previously recovered from a torn ACL in time for a major tournament, working her way back to fitness under a similar time frame to help Canada win the bronze medal at the 2012 London Olympics.

“Unfortunately a little déjà vu from before London where I was dealing with a knee injury,” Matheson said in October. “I had surgery the November before that, as well. Hopefully I can make a similar comeback. Obviously I want to be in a World Cup so that’s my goal.”

Canada defender Lauren Sesselmann is closer to a return. She said last week that she is at the point of “almost full contact.” Herdman said on Monday that Sesselmann is “getting there,” and he hopes to have her rejoin the national team in April. Canada plays away against France on April 9.

Canada opens the World Cup on home soil on June 6 against China.