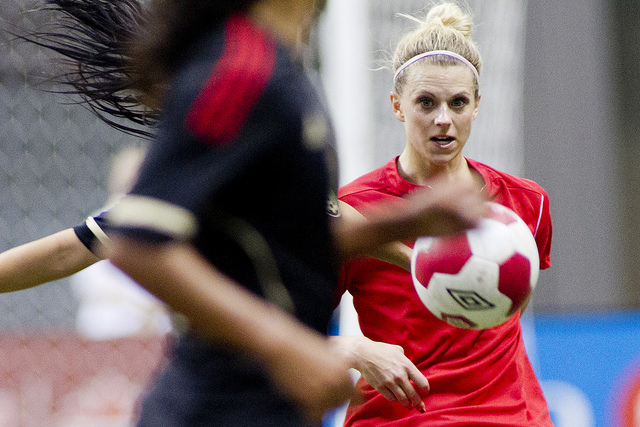 Canada defender Lauren Sesselmann says she is “almost full contact” as she attempts to recover from a left ACL tear in time for the Women’s World Cup in June.

Sesselmann was not called in by Canada coach John Herdman for next week’s Cyprus Cup, but she said in an interview with Red Nation Online that not going to Cyprus is part of the plan, to some extent.

“My goal was first to get to Cyprus, but then we decided that we wanted to have a little bit more full field training, full contact before I kind of just jumped into games in Cyprus,” Sesselmann said.

Sesselmann, who was born and raised in Wisconsin but plays for Canada through her father’s citizenship, will report to preseason for the Houston Dash in early March. The Dash picked up Sesselmann’s rights last year via the expansion draft, but the defender tore her left ACL at last year’s Cyprus Cup and has not yet played for Houston. She played for FC Kansas City in 2013.

Sesselmann says she sees herself on the field come June 6, when Canada opens up the World Cup on home turf against China. That is now 98 days away.

Canada also has to worry about midfielder Diana Matheson, who tore her left ACL in October. Canadian Soccer Association president Victor Montagliani is optimistic that both Matheson and Sesselmann will be ready for the World Cup.

Victor Montagliani on Sesselmann & Matheson. "I think they're coming along well, whether they'll be ready for the World Cup time will tell."