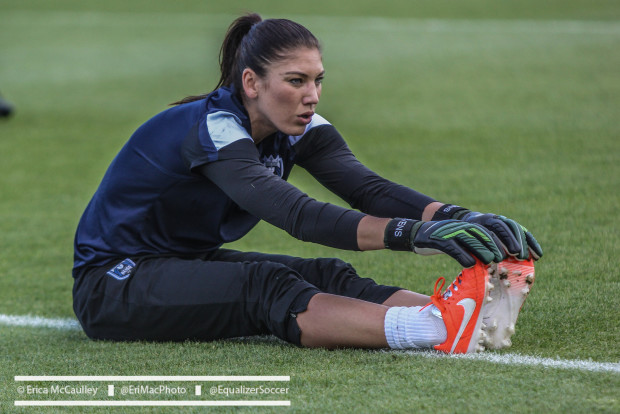 Hope Solo said in her first interview since being suspended by U.S. Soccer in January, calling the incident that led to her 30-day ban a poor decision.

“Well, clearly, I wasn’t thinking. I mean, it was a horrible choice. … I think I just wasn’t in a good place, emotionally, to even make good decisions,” Solo told Robin Roberts on Good Morning America. “I mean, it’s not an excuse but I just, it was stupid. Should’ve called a taxi.”

U.S. Soccer learned of the incident the next day via media reports. Solo was suspended for 30 days, missing friendly matches against England and France. She was reinstated to the team on Saturday after meeting unspecified requirements set forth by U.S. Soccer. Solo will rejoin the team for the four-match Algarve Cup in Portugal, an important pre-World Cup tournament which starts next week.

Solo said she wants people to understand that she’s “a work in progress” and she’ll “continue to be a work in progress until the end of my days.” She asked for forgiveness in the interview.

It appears that counseling is part of Solo’s requirements with U.S. Soccer, based on her comments to Roberts.

“I’m working through those emotions,” Solo said. “I was filled with anger. I’m finally able to sit down, talk to somebody about what I’ve been going through — very traumatic events over the last year. Just being able to talk to somebody has been really beneficial to me. I can cry it out. I can try to understand it. It’s been healthy for me to talk it out and to deal with my emotions instead of tucking them away.”

Stevens’ DUI arrest came one week after Solo had two charges of domestic-violence assault against her dismissed. Solo was accused of fourth-degree misdemeanors following an alleged altercation with her half-sister and teenage nephew on June 21, 2014.

U.S. Soccer and Seattle Reign FC allowed Solo to play on despite the charges. Both organizations insisted that Solo deserved due process before receiving any potential punishment.

“All of us, in my opinion, have a fundamental right to be considered innocent until proven guilty. … I know U.S. Soccer took a lot of heat,” Solo said. “But I am very grateful that they let due process play itself out. Those eight months were some of the worst months of my entire life.”

Solo said on Good Morning America that she was the victim and she was “concussed pretty severely” by her teenage nephew, who she says is 6-feet-9-inches tall and 280 Ibs. “It was a scary night,” Solo said.

In response, Solo’s half-sister, Teresa Obert, released a statement saying, “It does a disservice to domestic violence […] victims to suggest that one’s physical size is a determinative of whether one is an abuser.”