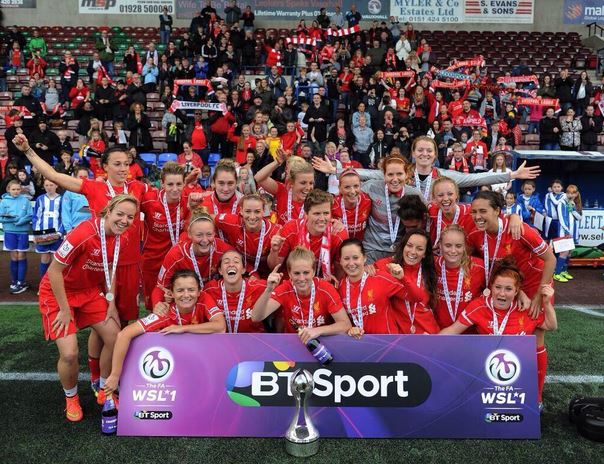 England’s eight-team FA WSL 1 will begin its fifth season of league play on March 25, while the second division FA WLS 2 will begin its second season with 10 teams on March 18. Promoted Sunderland will be playing in the top league for the first time, while relegated Everton is looking to bounce back immediately. The FA WSL 1 will break from May 11 to July 11 for the Women’s World Cup, with final league matches on Oct. 4. The FA WSL 2 will break from June 1 to July 10, with the season ending on Oct. 18.

There have been a few interesting signings and player transfers within FA WSL 1, including a few familiar names to North American fans:

The two-time reigning champions have signed arguably the top young player in the world in Nigerian international forward Asisat Oshoala. The 20-year-old Oshoala won the Golden Ball and Golden Boot awards at last summer’s U-20 Women’s World Cup in Canada as Nigeria finished second to Germany. Last fall, with the full national team, she won the Golden Ball as Nigeria won the African Championships and booked a ticket to this summer’s Women’s World Cup. She also captured the African Women’s Football Player of the Year and Youth Player of the Year. She joins the Reds from River Angels of Nigeria, after a spell with FC River Internationals in Lagos. This is her first time playing for a club abroad and she is the first African to play in the FA WSL 1. Liverpool head coach Matt Beard said: “We beat a number of top American and European clubs to Asisat’s signature. Asisat is one of the best young players in the world.”

The Gunners finished an uncharacteristic fourth last season but added Spanish coach Pedro Martinez Losa, who was an assistant with Western New York Flash for the past three seasons. Losa previously was a head coach in his native Spain with Rayo Vellecano, winning the Spanish Cup in 2008 and league titles in 2009 and 2010, as well as guiding his club to a Round of 16 Women’s Champions League berth in 2010-11.

Forward Vicki Losada, who had three goals and six assists in 23 games last season for the Flash, will join Losa this season with Arsenal. She played for six years at Barcelona. Losada’s countrywomen Natalia Pablos Sanchon joins the London side from Bristol Academy, where she played for two seasons, as does young Jemma Rose, who has played for England at the U-23 level and was the FA’s women’s young player of the year in 2011.

Lianne Sanderson, who had 41 international caps for England as of last month, will play for Arsenal, leaving the Boston Breakers to reduce her travel and work load in a World Cup year. Former Boston Breakers (WPS) Alex Scott and Kelly Smith are still stalwarts for Arsenal, who should challenge for the title.

On Feb. 12, Arsenal announced that they had signed Stanford University star forward Chioma Ubogagu. Ubogagu was born in London and will not count as an import. Ubogagu was a fourth-round draft choice of Sky Blue FC in last month’s NWSL College Draft, but would have gone much higher based on her ability if there was not suspicion that she would play abroad. She played with the U.S. U-20 World Cup champions in 2012.

The Sky Blues finished fifth last season and have added English international defender Lucy Bronze from champions Liverpool and English international midfielder Demi Stokes from Sunderland. Stokes played for the Vancouver Whitecaps in 2012 in the USL W-League and collegiately at the University of South Florida. City also signed Scottish international defender Jennifer Beattie from French side Montpellier. Beattie moved to France from Arsenal. Wales international Sarah Wiltshire arrives from Yeovil (FA WSL 2) and Nikita Parris was added on loan from Everton. The side will play in a new 7,000-seat stadium, part of a new $300 million club training complex.

Coached by former Chicago Red Stars first head coach (WPS) Emma Hayes, the Blues lost out on the title last term by goal difference but second place did earn them a Champions League berth. Forward Gemma Davidson, who has made a few appearances for England, signed after two years with Liverpool. Davidson played in WPS with the Western New York Flash and in the W-League with the Buffalo Flash, Chicago Red Eleven and New York Magic. Other new signings include England U-23 international Millie Bright, who arrives from Doncaster Rovers Belles (WSL 2), Niamh Fahey—a holding midfielder from Arsenal who is a Republic of Ireland international—and two who arrive from Kristianstads DFF of Sweden: goalkeeper Hedvig Lindahl, who has over 100 caps for Sweden, and 19-year-old international forward Marija Banusic. They join holdover attackers Eniola Aluko, who had 86 caps and 30 goals for England as of last month and Korean International Ji So-Yun, last season’s player of the year. Chelsea lost English international forward Rachel Williams and Three Lions centerback Laura Bassett to Notts County, while Japanese international and World Cup winner Yuki Ogimi has departed for Wolfsburg of Germany.

Rick Passmore’s side finished sixth last term but was troubled with injuries. New signings include England defenders Alex Greenwood and Fern Whalen (both ex-Everton) and England youth forward Jess Sigsworth from Doncaster Rovers Belles. Laura Bassett and Rachel Williams joined from Chelsea along with Scottish international midfielder Leanne Crichton, who has played primarily with Glasgow City at home, after short stints with Celtic and Hibernian. She has 26 appearances for Scotland.

Birmingham was leading the table going into the last round of matches and finished third, out of the Champions League berths. That was a setback for the club that, in last year’s UEFA Champions League, made it to the semifinals. A league title in 2015 would go a long way in salving the sting from last season’s late collapse. City’s English international winger Karen Carney, who played in WPS with the Chicago Red Stars in 2009 and 2010, is hugely influential on the field, as she was the leading goalscorer in the league last season. David Parker was name Manager of the Year in 2014.

The Vixens defeated Barcelona 2-1 on aggregate in November to reach the quarter-finals of the Champions League for the first time in the club’s history. Dave Edmondson’s side face Germany power Frankfurt over two legs in March’s quarterfinal tie, but will have to win the competition in order to qualify for the 2015-16 tournament after finishing seventh last season—just ahead of the relegation spot. Bristol Academy has a tough road, having lost both striker Natalia Pablos Sanchon and defender Jemma Rose to Arsenal during the offseason. Look for Bristol—historically a stable club built on youth—to add one or two international caliber players during the summer transfer window. Edmondson previously coached Adelaide United in the Australian W-League and in New Zealand.

Beth Mead, who scored a tremendous goal against Mexico in last summer U-20 Women’s World Cup, and English U-23 attacker Keira Ramshaw will lead the WSL 2’s top drawing side in their consolidation season in the top flight. Head coach Carlton Fairweather was a longtime player with Wimbledon in England and played with the New York Fever, Connecticut Wolves and the Greek Americans at the end of his career in the United Soccer Leagues and Senior Amateur soccer.