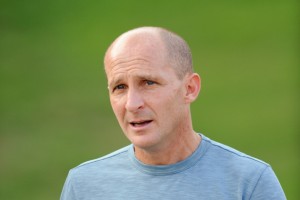 Paul Riley and the Thorns signed three players out of open tryouts in 2014. How many will make it this year?

HEMPSTEAD, N.Y. — Paul Riley does most things at least slightly differently from everyone else.  Open tryouts is no exception.

“We did a proper training session both days,” the Thorns coach said Thursday following two days of training at Hofstra University on Long Island.  “We don’t just have a tryout.  We have what I would classify as a typical Portland training session just so they understand what they’re going to get themselves into.”

Before they started Riley told the players about how NWSL contracts work and about what life would be like for the summer in Portland.  The two-time WPS Coach of the Year also stressed that being better than the players at the combine is only half the battle.  The other half is being good enough to play in NWSL.

“You have to look at where the future is.  There are obviously set positions we were looking for.  And I told them straight up, black and white, if you make the team it might be as a fill-in for a player who’s gone like Alex Morgan.  Can you do it? Because if you can then you’ve got an opportunity to come to preseason and to make the team.”

Thursday afternoon’s session began with a full stretch that looked very much like any other team.  Short-sided drills followed and then a full-field scrimmage that lasted about an hour without any significant break.  Riley lined up the players in a 4-4-2 with a diamond midfield as the Thorns normally do in NWSL matches.  Parts of Wednesday’s scrimmage were set in 4-3-3 formation since, “we played that way a couple of times last season.”

“It was a workout to say the least,” Sam Scolarici, who is in her final semester at Hofstra, said.  As a junior Scolarici set the school record for goals with 18 and followed that up with 17 as a senior.  “As seniors we end our careers in November and to have an opportunity to play with such high level players again is an honor.”

There are two significant difficulties going into a rapid-fire, two-day open tryout.  The first is trying to look good playing next to some people you may have just met during warmups.  The second is the reality-TV mentality of having to work with the other players while concurrently trying to gain the narrowest edge to get the call to go to Portland for preseason.

To help combat the first, Riley organized the group into subsets early Wednesday and tried to stick with them as much as possible.  “They’re always in groups together.  I tried to keep the groups together as much as possible so for two days, four sessions they were all together in their groups.  So for game time it became much easier.”  On the two days Riley said, “They were much better today than they were yesterday.”

“It was night and day,” Scolarici said.  “Both of the sessions (Wednesday) were so frantic.” She added that when Riley assigned teams and tried to get them to organize themselves. “That’s when we started playing real soccer.”

On the continuity issue, Scolarici said, “That’s a hard one. I would say maybe that I didn’t do that as well.  You make sure you communicate and show that you can be a leader.  For me I try to make trials like these as game-like and realistic as possible.  So if I have the opportunity to make a good pass I would do that than try to dribble around six players.  Maybe that’s (on me) because I don’t get the shot off and someone else does.”

Riley said 28 players started Wednesday morning plus Jasmyne Spencer of the Flash. “I was working kids camp in the bubble before the session and always (like) a chance to get a couple of more touches so I just jumped in.”

One player went out early with an injury and two others were no-shows on Thursday.  “They were probably the lower end,” Riley acknowledged.  Some of the others will get keep-in-touch notes from Riley, who said he may suggest some look for opportunities abroad.  And there figure to be three who will get a magical call (maybe a magical email) inviting them to Portland for next month’s training camp.

“We’ve got maybe five we’re going to talk over,” he said noting that Courtney Niemiec, Kat Tarr, and Hanna Terry all earned NWSL contracts out of Thorns open tryouts in 2014 and Mana Shim the year before that.

Positional needs will be a factor in the final decision about who goes to Portland.  There is another tryout back home where upwards of 70 players are expected to participate.  Riley would prefer the two sessions be closer together and then select a single group, but not much in early NWSL life is perfect.  And some players were using the moments immediately following the session to weigh their options based on which players were already committed to which preseason camps.

Tara Kearns, who sat out 2014 after playing her senior season at Hofstra in 2013, took a more pragmatic approach.  “All the girls out here are awesome.  It’s anyone’s game really.  Whoever makes it I’m happy for definitely.”

“Even if it is just for the two days,” Scolarici said, “it is more than most people get coming out of college.  If it doesn’t happen I’m okay with the way my career ended at Hofstra.”