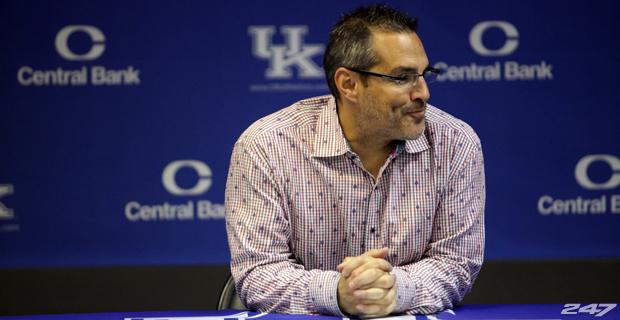 While the minutes until the final whistle ticked down on Feb. 8 in the United States’ game against France — a 2-0 loss for the Americans — U.S. fans grew ever mindful of the very short period of time remaining for the team to prepare for the World Cup. For the second time in three games, the US found itself on the wrong end of the scoreline, an increasingly familiar result for the team over the past year. With every passing second, the team’s form grows more worrisome.

The question looming large on everyone’s mind is this: Can the United States bring home the World Cup title from Canada? Jon Lipsitz, head coach of the University of Kentucky’s women’s soccer team, wonders just how the U.S. can do that. And how can the U.S. move forward beyond World Cup 2015?

Before the core issues are addressed, Lipsitz is clear to point out that his aim is not to criticize the U.S. women’s national team coaches or administration, but rather present one person’s plan for the team and how to move forward. There are many ways to play this game and no particular way is necessarily right. Lipsitz acknowledges that some things are impossible to know for sure without being privy to how players perform in training every day. He does not believe he has the only way, or even the best way to win and develop, but he likes his plan.

For Lipsitz, the problem facing the United States can be boiled down to a few simple words: It is impossible to serve two masters. For far too long, the program has been expected to win while simultaneously being expected to develop.

“You can’t always do both at the same time,” he says. “Sometimes, you’ve got to go backwards one step back for two steps forward. It’s literally what development is. When anyone is learning any difficult process, they get worse before they get better.”

How can the U.S. win the World Cup? The team has to play to its strengths. Perhaps lost in the discussion about the team’s struggles is the fact that even on their worst day, the Americans are still among the best in the world.
Lipsitz believes the U.S. can win if they play to their strengths which are:

In order to exploit these strengths, Lipsitz feels the team should utilize a 4-3-3 as its shape. Used properly, he notes how the formation allows the team to play to its strengths while simultaneously hiding its deficiency at outside back.

When the team can’t press the wide players higher up the field, they will tuck into more of a 4-5-1 formation. In this shape, the space for decision-making is restricted for the outside backs as they’ll have players in front of them.
Up top, Alex Morgan, Christen Press, Sydney Leroux and Amy Rodriguez should battle it out for three spots. The one who loses out on a starting job will offer a speedy attacking option off the bench.

Meanwhile, Abby Wambach would be used in specific situations, either when the game is tied or the team is losing with 20-25 minutes to go in a match. Wambach still has enough in the tank to press and score off set pieces in these situations, Lipsitz says. She could be the “essential” sub for the Americans this summer.

In order to use the team’s attacking corps properly and also make use of the team’s famed mentality, the team needs to use some German “gegenpressing” to play high up whenever possible and absorb pressure when they can’t to help out the fullbacks.

[MORE: USWNT gets needed win over England behind Morgan’s goal]

In order for the 4-3-3 formation to work, Lipsitz says the team needs to begin in a two-behind-one shape in the midfield and no matter what, someone has to hold. Someone has to sit home, do the dirty work and get no glory.
This late in the buildup to the World Cup, it’s too late to bring new players in and even if there’s time to integrate new players, it’s not going to happen in the current setup. The player that fills this void in the lineup has to be a regular call-up already. Lipsitz believes this player could be Julie Johnston, with Lori Chalupny possibly also getting a look.

With Johnston holding, other midfielders like Lauren Holiday and Carli Lloyd and Morgan Brian can get back to doing what they do well for the United States. Lloyd will be free to fly forward whenever she wants and Holiday will have space to play-make.

How can the issue at outside back be resolved? Lipsitz suggests that Ellis should simplify the role. The U.S. should put the best defensive wide backs on the field. He believes that if the U.S. doesn’t give up poor goals from its outside backs — and those players just focus on defending and then getting forward when possible to serve the box — that the team will still win the World Cup.

There’s been somewhat of a revolving door at left back, but Lipsitz feels Crystal Dunn is a possible answer. While injuries have limited her playing time, which in turn may have left her unready to play and stay composed, she is fast enough and a good enough of a 1-v-1 defender to play the position.

There’s one special player that hasn’t been accounted for yet: Megan Rapinoe. Could Rapinoe possibly play the left back position in the World Cup or would she be a defensively liability? Lipsitz doesn’t have answer to this question. If Rapinoe can’t, then she has to fit into the midfield. Then Rapinoe, Lloyd and Holiday are fighting for two starting spots. All three of them cannot be in the midfield together.

If all these elements are put together, the U.S. has a good chance of hoisting the trophy on July 5. On July 6, Lipsitz feels the entire focus for the next three years should shift to development. That’s when the federation should worry about style of play, as well as technical and tactical ability. That’s when it’s time to revamp everything.

“Sunil Gulati himself needs to say ‘I don’t care about winning for three years,'” Lipsitz said. “We have great coaches let them do their job without the pressure of winning because right now after what happened to Tom Sermanni if I’m anyone from U-14 to the (full) US National Team I’m worried if I don’t win.”

Recently, U.S. Soccer released a long-term development plan and announced the hiring of additional youth coaches. The women’s side now has the resources to overhaul the system.

“This massive decline in our play vs. the rest of the world is the result of a lack of resources put in because I believe that U.S. Soccer believed they didn’t have to put it in because guess why? We were winning,” Lipsitz said. “Well now that we’re not dominating the world, guess what they’re doing? Putting the resources in. That’s so awfully backwards but at least we have it now.”

After the recent coaching hires, Lipsitz feels there’s other important hires that need to be made by the federation. It’s widely acknowledged that one of the biggest challenges facing U.S. Soccer is the sheer size of the country. It makes communicating ideas to the masses involved in women’s soccer difficult.

Coach Lipsitz believes that technology is the key to bridging this gap. Having a staff whose job it is to communicate ideas and coordinate technologically with the youth, college and professional coaches in this country would absolutely revolutionize the process. No one currently employed with U.S. Soccer has the time to do it properly or purposefully enough. There are many great coaches in this country, at all levels. But without organized curricular and inspirational communication from, and to, U.S. Soccer, these great coaches are no longer a properly utilized strength for our overall development.

Lipsitz says technology should be used every day to create video sessions, and clips so coaches and players alike can model where we want to go developmentally as a country. Coaches want to know what the national staff is working on. Coaches and the players themselves nationwide need to know what must be mastered to excel at the national team level. Part of the federation’s development plans are to launch a digital coaching center this year.

Lipsitz truly believes that the needed development can occur if all actors from U-9 coaches all the way up to the staff at U.S. Soccer work together. Everyone’s got to remember it’s not “us vs. them” and remember everyone in the U.S. wants to be the best again. There must be a unified front to develop. But it is ultimately U.S. Soccer’s job, and no one else’s, to make this work consistently.

Lipsitz admits he might be idealistic. Amid all the pessimism surrounding the U.S. women’s national team at the moment, perhaps a little idealism is what is needed.