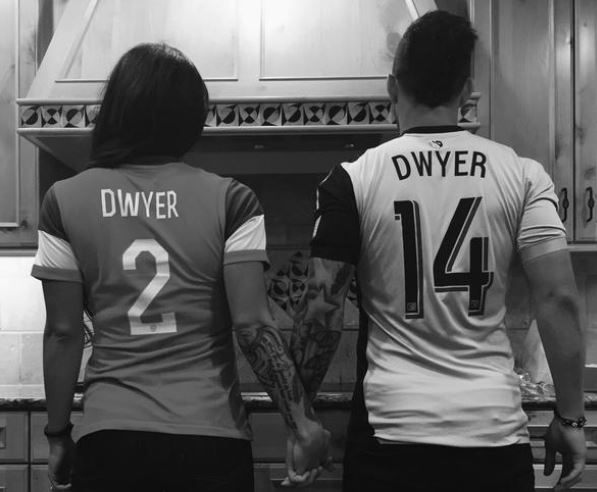 The couple met in 2013 and began dating last year. The pair of 24-year-olds got married in January but revealed the news on Valentine’s Day to play off the fact that Leroux wears No. 2 and Dwyer wears No. 14.

Leroux and Dwyer wed about a month after Leroux’s friend and U.S. teammate Alex Morgan married Servando Carrasco on New Year’s Eve. Carrasco was acquired by Sporting Kansas City in the offseason.

What do you do when you meet someone who has seen the best of you, the worst of you and chooses both? pic.twitter.com/BHaZrvjBPH

Been hiding this one for a while now. For once I don't know what to say…. ❤️ pic.twitter.com/2vK3i7jS8f

“Juggling our careers and relationship is very difficult, which is why we decided to wed privately in January,” the pair said in a statement to People magazine. “We wanted to announce our marriage at an appropriate time when we were together and at a time that suited our families. We also wanted to make sure that we told all of our close friends and teammates before we announced it publicly.”

Leroux, who was born in Canada but chose to play for the U.S. at a young age, has 33 goals in 64 caps for the United States. In 2014 she scored five goals in 22 games for Seattle Reign FC, who won the NWSL Shield but lost in the championship to FC Kansas City.

Dwyer was born in England but has expressed interest in playing for the United States once he becomes eligible in 2017. He scored 22 league goals for Sporting KC in 2014, earning a new contract in the offseason.

The couple just bought a house in Kansas City.