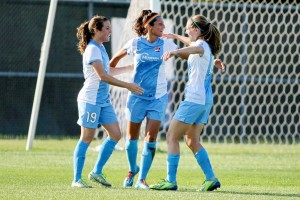 “Signing Nadia was our top objective coming out of last season,” Sky Blue FC technical director and head coach Jim Gabarra said. “We had some great momentum when she arrived last year, and we want to continue that momentum into this season. This is huge for both Sky Blue FC and the league itself in signing a player of Nadia’s caliber, and we are very much looking forward to having her for the entire season.”

Nadim, 27, will look to her to carry the scoring burden. Nadim will be around the entire season since Denmark didn’t qualify for the Women’s World Cup, a benefit for Sky Blue FC that several teams will not share.

Danish club Fortuna Hjørring, Nadim’s announced the move last month, but the deal had not yet officially been reached.

Nadim was born in Afghanistan and moved to Denmark as a 12-year-old refugee with her mother and sisters. She debuted for Denmark’s senior team at age 19. She speaks five languages and is studying to become a doctor at Aarhus University in Denmark.