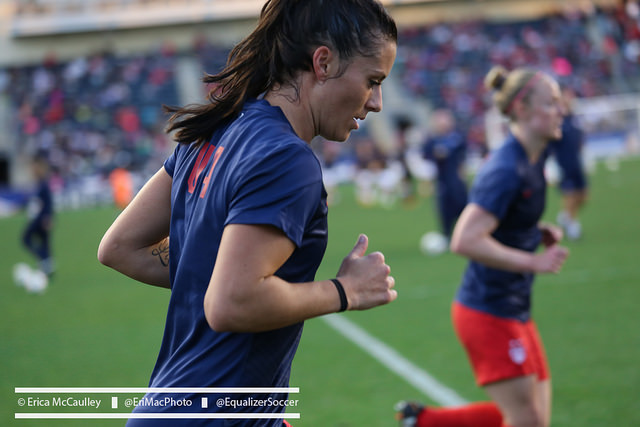 The United States defeated England, 1-0 on Friday, picking up a much-needed win on the road ahead of the Algarve Cup. Alex Morgan scored her 50th career international goal, becoming the 10th American to do so and the third-fastest to reach the mark.

Here are five things we learned about the United States and England, ranked No. 2 and No. 6 in the world, respectively:

Excuse the cliché, but the U.S. needed a victory for confidence above all. Sunday’s loss to France was humbling and it came following four games in Brazil that included a draw against China, an ugly loss to Brazil, a draw against Brazil again and a win over lowly Argentina. The U.S. stopped the bleeding Friday and has something positive to build off of heading into next month’s Algarve Cup. The greatest cliché out there is that ‘the American way’ is finding ways to win even when unwarranted. The U.S. got out of England with a victory.

England is not World Cup contender

If you watched Germany beat up on England in November at Wembley, you know that England is a long way off from challenging for a World Cup title. While Monday’s result — which could have somehow even been a tie if not for a poor offside call — wasn’t as ugly as that game, England’s negative approach to the game was further proof that the team now ranked No. 6 in the world is not yet at the level of being one of the best in the world. Manager Mark Sampson held out some starters from the match, but players will be missing for games at the World Cup due to injuries or otherwise. It’s not an excuse for the U.S. — currently dealing with several injuries and suspended Hope Solo — and it’s not an excuse for England. Good news, though, England, finishing second in Group F looks like the better path to the World Cup semifinals (if you can get there) as it likely avoids Germany.

Alex Morgan is the most important player on the U.S.

Alex Morgan didn’t touch the ball until the 21st minute on Friday. Four minutes later, she scored her 50th career international goal. The U.S. striker once again looked confident on Friday and she was a rare bright spot for the U.S. on Sunday against France. Her return from injury is the most welcome of sights for a U.S. team still trying to find itself. As the Americans continue to try to do that, they’ll increasingly find Morgan, who unlike her first World Cup in 2011 will be the one asked to carry the heaviest scoring burden in 2015.

It was interesting to see Jill Ellis go back to the 4-2-2-2 formation on Friday against England after it failed miserably against France on Sunday, but Carli Lloyd was once again employed on the left side of the midfield. She found her way more central on Friday, which the U.S. needs her to do, but Christen Press played narrower and deeper than she needs to as well. Ali Krieger got up the right side and Meghan Klingenberg found some room on the left side to at least provide wide options. Morgan’s goal came from a cross whipped in from Lauren Holiday.

Sampson has options up front

As overly cautious as England was, there were bright spots throughout the match and they almost all involved Fran Kirby, who plays for FAWSL 2 side Reading. The 21-year-old forward was unlucky not to be rewarded inside 10 minutes for a wonderful spin-turn at midfield that started an England counterattack, and it was her shot in the 56th minute that went off the crossbar and fell to Jodie Taylor for what should have been the equalizing goal. Taylor, not with Portland Thorns FC after a trade on NWSL Draft day, has built her résumé over the past year. Eniola Aluko and Lianne Sanderson have competition.