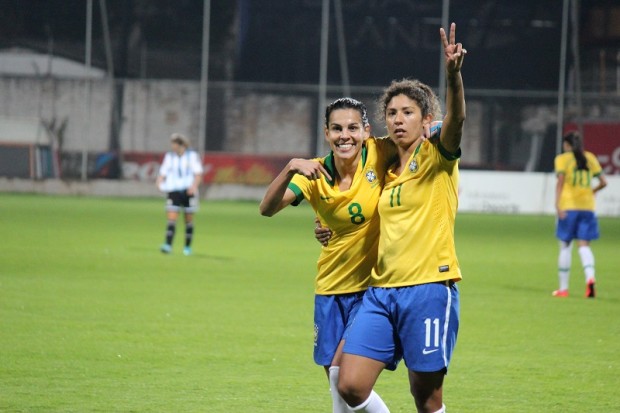 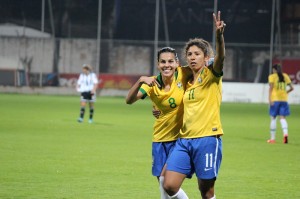 Brazil will host an 18-month residency camp heading into the World Cup and Olympics. (Getty Images)

So there actually won’t be a bunch of Brazilians in the National Women’s Soccer League, after all.

Brazil announced on Wednesday that plans for a permanent residency team — which were first announced in December — are now official. The residency will run now through the end of the 2016 Rio Olympics.

Brazil coach Vadão will bring in 27 players, which means the several Brazilian players who were signed by NWSL teams have been released. The Boston Breakers will lose forward Andressa Alves and midfielder Francielle, while the Houston Dash lose defender Poliana and midfielder Rosana.

Five-time FIFA World Player of the Year Marta will not participate in the residency program since she already has a contract with FC Rosengard in Sweden and could not get out of the deal according to the Brazilian federation. The same goes for 20-year-old Bia, who plays for Hyundai Steel Red Angels in South Korea.

“We were surprised by the CBF’s decision to have their players in residency for the next 18 months,” said Dash managing director Brian Ching. “We feel that playing in the NWSL could have helped Rosana and Poliana prepare for the 2015 World Cup and the 2016 Olympics. However, we respect the CBF’s decision and do not wish to impede the ability of any of our players to represent their country. We wish Rosana and Poliana the best of luck with Brazil.”

The Breakers said they have already identified two international players to replace the Brazilians who they are losing. Brazilian Ketlen Wiggers will still report to Boston in 2015, having been left out of the residency roster.

“We are excited that Andressa and Francielle have been identified by the Brazilian Federation to participate in their upcoming residency program ahead of the World Cup and Olympics, and will miss having them with us this season,” Breakers general manager Lee Billiard said. “We want to wish them all the best with the national team. As we truly believe they are talented players, we will retain their rights within the League and hope to bring them back at some point in the future.”

“We have moved quickly to obtain the rights of two new international players who have verbally agreed to terms, and will look to officially announce their signing in the near future,” Billiard added. “We are confident in the quality of our roster, which features a balance of young exciting players and talented experienced players, and are looking forward to a great 2015 season and beyond.”

Brazil will play China, Sweden and Germany in its Algarve Cup debut in March.

FIFA Women’s Club World Cup proposed
The Lowdown: When, to where will NWSL expand?