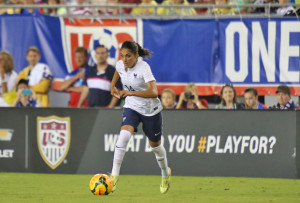 Louisa Nécib is out several weeks with a left foot injury.

France midfielder Louisa Nécib is out several weeks with a rupture of the plantar fascia in her left foot. Nécib’s club, Olympique Lyonnais, says she will e re-assessed within 15 days to more accurately determine the length of her time out.

Nécib went off injured for France on Sunday in the 40th minute of a 2-0 win over the United States. She was reportedly seen leaving the stadium on crutches.

She will miss Lyon’s crucial Feb. 21 league match against PSG.

Here is how Nécib got injured on Sunday: