France earns first win over USWNT ahead of WC 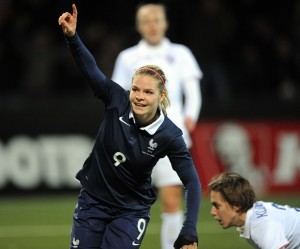 France defeated the United States women’s national team for the first time, winning 2-0 on Sunday in Lorient, France, in a crucial World Cup tune-up match for both teams. The U.S. had won 14 of the previous 16 matches, with two draws in the series.

On Sunday, France scored twice in successive minutes early in the second half, first in the 50th minute behind a Eugénie Le Sommer header and then a minute later when a cross by Jessica Houara-d’Hommeaux sliced over Ashlyn Harris and into the back of the net. Harris started in goal in place of the suspended Hope Solo.

The U.S. women now have only one win from their last five matches, including a loss and a tie to Brazil in December. The Americans were shut out in consecutive games for the first time in 13 years.

Le Sommer had two golden opportunities to put France ahead in the first half, first pushing a shot just wide in the 4th minute after flicking the ball to herself. Le Sommer had an even better opportunity in the 16th minute, when she collected a lofted cross at the back post that U.S. defender Meghan Klingenberg misplayed. Le Sommer chested the ball down well but sliced her left-footed shot wide from inside 10 yards out.

The best opportunities for the United States came on the counterattack, which for the first time since October was led by forward Alex Morgan. The 25-year-old striker got in behind France’s defense on several occasions, the best of which came in the 45th minute, just before halftime. After touching the ball around an on-rushing Sarah Bouhaddi, Morgan sized up the empty net at an angle but saw her shot was blocked by recovering France defender Laura Georges.

France nearly scored a third in the final minutes but substitute Elise Bussaglia’s shot from 18 yards out went off the far post.

France, ranked No. 3 in the world, has now defeated world No. 1 Germany, world No. 2 USA and world No. 8 Brazil in the past four months.

Of concern for France is the left ankle injury to midfielder Louisa Nécib, who left the game in the 40th minute. She was reportedly seen leaving the stadium on crutches.

Next up for the U.S. is a trip to play away against England on Friday.

Defender Christie Rampone, midfielder Megan Rapinoe and forward Sydney Leroux were all unavailable for the U.S. on Sunday due to injury. Rampone and Rapinoe did not make the trip. Leroux is listed as day-to-day for Friday’s game against England.