Huster soaking up experience of first US call-up 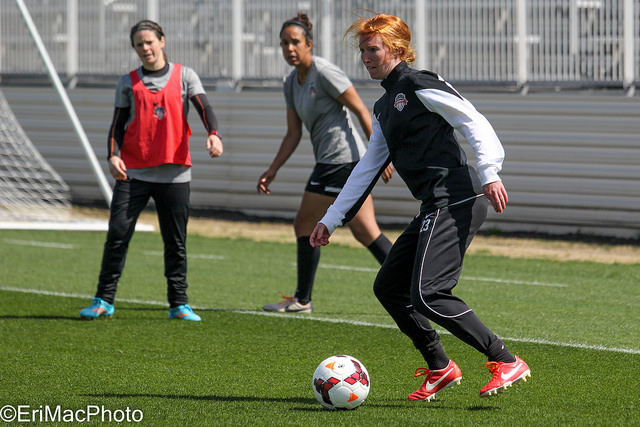 Tori Huster is with the U.S. senior team for the first time in France. (Photo Copyright Erica McCaulley for The Equalizer)

Four months before a World Cup isn’t exactly a lot of time to make an impression, but that is the window of opportunity for Tori Huster in her first call-up to the senior U.S. women’s national team.

Huster somewhat unexpectedly finds herself in France this week after impressing in January’s U-23 training camp, which overlapped slightly with the senior team’s annual camp in Carson, Calif. Huster, 25, was one of the nine overage players to train with the U-23 team in January. Virginia and U.S. U-23 coach Steve Swanson, who also assists senior team coach Jill Ellis, felt along with Ellis that Huster was ready for a trial at the highest level.

“Jill basically said that I’m on her radar and that’s great to hear,” Huster said before leaving for France on Sunday. “Steve and Jill agreed that this would be a good training environment for me to get in.”

The U.S. women’s pool of 30 or so players — to be trimmed to 23 for the World Cup — has long seemed impervious. The only new name to recently join the scene following her National Women’s Soccer League play was Allie Long in the latter half of 2014, but Long is not with the U.S. for its trip to France. Huster started 22 games in various positions for the Washington Spirit in 2014 to help the club go from bottom-dwellers the year prior to on the verge of the NWSL Championship match, losing to Seattle in the semifinals.

Going to the World Cup hasn’t realistically been something on the minds of players outside the pool. Lori Chalupny’s recent clearance from concussions after a five-year battle with U.S. Soccer was a surprising and welcomed addition to the player pool, but an exception to the rule.

Huster didn’t even know going into January that it was possible to make the trip for games against France on Sunday and against England on Feb. 13. But now she has a chance — a longshot, no doubt, but a chance — to impress quickly enough to make it to the World Cup in Canada, which kicks off four months from Friday.

“It’s definitely on my mind, but I guess this trip will let me know if I’m there and if they feel I’m there,” Huster said. “I’ll obviously devote all my resources to that.”

Advantageous to Huster is her versatility — a word Ellis uses often — as a midfielder and a defender, and her most natural position, which is one the U.S. national team has long lacked: defensive midfielder. She gained significant experience in that role with Washington in her first two years as a full professional and was rewarded with a new contract this offseason.

“Tori has been a very important player for us over the two NWSL seasons,” Spirit coach Mark Parsons said. “She is a hard working person and talented midfielder who gives everything every day. We are all pleased for her to gain this opportunity to train and travel with the USWNT. Tori will know more than anyone that this is just another step in improving and there is more hard work ahead.”

Going to Europe for two weeks will if nothing else serve as experience for Huster in the future. The Olympics are next year and there is another World Cup in 2019, a cycle that should see a bevy new faces introduced as veteran U.S. players retire.

Huster says she will keep plugging away for future opportunities, which means playing well in the NWSL, theoretically a proving ground for making the national team.

“Having the NWSL here, that’s almost been my tryout over the last two years,” said Huster, who acknowledges that there is a major “gap” in opportunities for players between the U-23 age and the senior team. That’s one of the main issues that U.S. Soccer finds itself addressing as it tries to combat being caught by previously inferior teams.

For Huster, the goals of consistently making the U.S. team remain long-term, but the 2015 World Cup looms and the experience of being in camp with the senior team is incomparable.

“This just makes it a little bit more real, tangible,” she said. “There’s still a lot of work to put in and miles to put in.

“Being around these girls more 24-7 in this camp will help me. That’s one thing I noticed is the speed is just 100 miles per hour.”

The U.S. kicks off against France in Lorient on Sunday at noon ET on ESPN2, then plays away to England in Milton Keynes on Feb. 13 at 3 p.m. ET on Fox Sports 1.