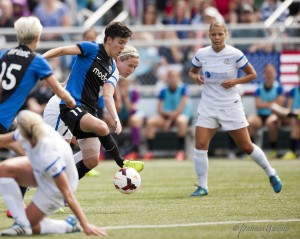 The 2015 NWSL schedule is out and without question it is the most aesthetically pleasing set of matches dating back through WPS.  The reduced number of games combined with an increase in the number of weeks means the nine clubs will play 20 matches over 21 weeks.  In 2014 they played 24 matches across 19 weeks.  The uneven number of teams means there are still midweek matches, 14 to be exact out of 90 total matches or 15.6 percent.  Last year there were 35 midweek matches out of 108 (32.4 percent).

Here are XI matches to circle on your calendar.  Note there are no home openers on the list.  They will be important, especially for the new venues in Kansas City and Boston.  But they were announced awhile back and have already received considerable discussion.

The first midweek match of the season pits the holders from Kansas City against the Shield holders from Seattle.  It is also a rematch of the 2014 NWSL Championship, a somewhat surprising, 2-1 win for FCKC at Seattle.  The Thursday match will be an interesting and important test for Kansas City’s new venue.  Can a high profile opponent draw a sizable crowd during the school year? As the first of five midweek home dates, the club had better hope the answer is yes.  There are no USWNT friendlies in the near term from either direction so the rosters figured to be maximized for this one.

The Spirit will return to Memorial Stadium after coming tantalizingly close to upsetting the Reign there in last year’s semifinal.  With USWNT matches three of the last four weekends after this leading into the World Cup this could also very well be the last weekend we see the U.S. players in league action until the other side of the tournament.

This will be the second straight year the Red Stars go to Toyota Park for a doubleheader partnering with the Fire who will host Real Salt Lake in the first leg.  The 2014 doubleheader was a rousing success.  The drawback to the 2015 version is the USWNT friendly the next day in San Jose.

The return match following a 12-day break for the start of the World Cup will see the league’s first two champions in action.  Unfortunately anyone on a World Cup roster will still be in Canada.  The teams—who knocked each other out in the semifinals on the way to their respective titles—meet again August 12 in Kansas City.

The highest-profile match of four happening six days after the World Cup final.  Participating players won’t have far to travel from Vancouver so fingers are crossed that everyone will be ready to go for this one regardless of who the last two teams standing in Canada are.  (Perhaps players could at least make themselves seen as they did after the 2011 World Cup.)  This will be an early barometer as to how, if at all, the World Cup impacts the league at the gate.  It is also a matchup of the leagues two Shield winners, both of whom lost the final at home.  And in 2014 the Flash went winless against the Reign despite carrying leads late in all three matches.

Heather O’Reilly’s return to Boston? Maybe.  The Blues are at Soldiers Field on May 30, but the U.S. plays South Korea at Red Bull Arena that day.  This one is the week after the World Cup final.  If the U.S. is there it could be a short turnaround for one of the Breakers’ most popular players to jump right back into league play.

UCLA players were taken 2-3-4 in the NWSL draft last month with Sarah Killion going to Sky Blue and the Flash grabbing Abby Dahlkemper and Sam Mewis.  This will be the first meeting that pits the long-time teammates against each other as pros.  It should also feature the full rosters for both sides two weeks after the World Cup final.  And if Sam Kerr winds up with Sky Blue after the Cup this will be her first time going against her former team.

The Pacific Northwest rivals actually became rivals last season thanks to a 90th minute win for the Reign that was followed by the Riveters clashing with Hope Solo plus a Thorns win on the final weekend of the season to book themselves a playoff berth.  This is a Wednesday match and the first Thorns home match following the World Cup.  The joint should be jumping for this one.

Carli Lloyd had her two best club seasons with the Flash, but they traded her to Houston last fall.  This will be her first time as a visitor at Sahlen’s Stadium since she championed the Flash midfield in 2013 and 2014.

The only other meeting between the Thorns and Reign will happen four days after the first one.  Neither team will want to be off form heading into the week.  Traveling fans make note of this juicy, two-match stretch.

Last year the Dash lost their last match of the season to finish below the Breakers and lay claim to the No. 1 pick, which they used on Morgan Brian.  This time around they’ll be looking to close out their home season as playoff contenders.  They’ll have one more match after this one—Sept. 6 in Chicago—but it will be the Breakers season swan song.  Will they leave it as a playoff team, a non-playoff team, or will their status hang in the hands of how others fare on the season’s final weekend?