Breakers to play at Soldiers Field in 2015 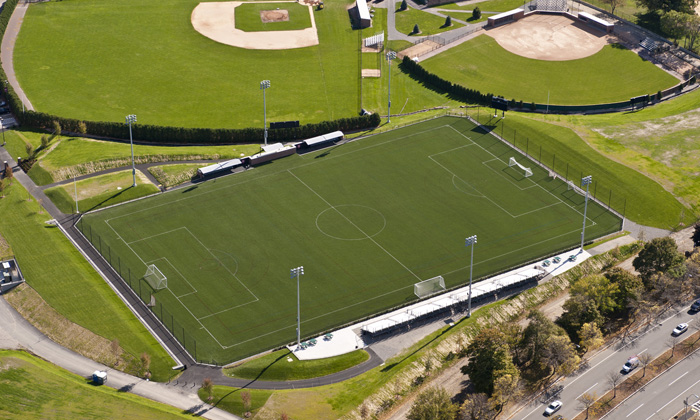 Soldiers Field Soccer Stadium is the new home of the Boston Breakers. More seating is currently being added. (Courtesy Photo)

The Boston Breakers will play the 2015 at Soldiers Field.  The field located next to the team’s 2014 home, Harvard Stadium, is currently undergoing renovations that will bring seating capacity to 4,000.  Standing room and pitch-side tickets will also be on offer.  The Equalizer reported the move last week.

“This has been a project we have invested a lot of funding into and something we have worked on for a while now,” Breakers general manager Lee Billard said.  “We are excited about the facilities development for the 2015 NWSL season.  The stadium will make for a very close and electric environment along with a top-class playing field.”

The most positive development from a field perspective will be the absence of lines for other sports.  Harvard Stadium was cluttered with football and lacrosse lines making the viewing experience awkward for even the most tolerant fans.  The move to Harvard Stadium last season was a positive in terms of location, but the garish pitch and expansive layout made for a difficult season.

Harvard Stadium will be undergoing the installation of a new turf this spring, which prompted the Breakers’ move across the parking lot.

“As a location, Harvard is important to us,” Billiard said.  “It is in a good location on the map for fans to get to, and we want to start building a consistent location after moving these past two years.”

Soldiers Field hosted the Breakers once before when the extended 2010 WPS season shut them out from hosting their playoff match at Harvard Stadium.  That match, the Super Semifinal, was one by the Philadelphia Independence on an extra time goal by Danesha Adams that the Breakers claimed should have been a handball.

The 2015 Breakers open play at Soldiers Field against the Houston Dash on Sunday, April 26.