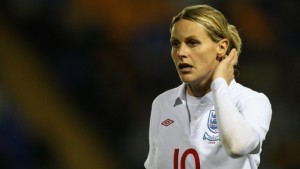 Smith, England’s all-time goal-scorer with 46 goals, said the struggle with injuries became too much, but she has “achieved all [she] wanted in the international game” despite ending her 20-year England career four months prior to the 2015 Women’s World Cup. Smith said she had been deliberating the decision for months.

“I don’t feel I needed to be at the World Cup to prove myself and put my body through another tournament,” Smith said in a posting to social media on Wednesday. “I’m just so proud to have represented my country so many times.

“I still remember by debut, in 1995, against Italy at Sunderland. I remember it like it was yesterday and it’s a great feeling pulling on the white shirt and singing the national anthem. I’ll miss that. I’d have to say scoring four goals in the 2007 World Cup is the highlight, but playing in the 2012 Olympics was special and so was finishing third in the 2009 Fifa Women’s World Player of the Year award.”

Smith revealed that in November ahead of England’s watershed match at Wembley against Germany, she received initial news that she had torn her ACL again.

“I thought, ‘That’s it. I’m done. My career is done. I can’t take another injury,'” she said. “I then had a scan and found out the injury wasn’t as bad as first feared but my emotions were all over the place. It has just become increasingly hard to drag myself out of bed, what with my knee and my Achilles, and something had to give.”