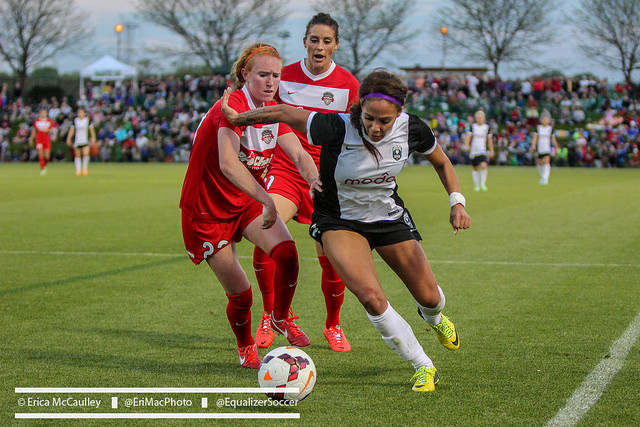 Tori Huster (left) joins the USWNT for the first time on a trip to France and England. (Photo Copyright Erica McCaulley for The Equalizer)

The Washington Spirit midfielder was named to U.S. coach Jill Ellis’ 24-player roster for upcoming away matches against France and England. The U.S. departs on Sunday for games against France on Feb. 8 and against England on Feb. 13.

Huster has seen time with U.S. youth national teams and was in the recent January U-23 national team training camp. She started all 22 games in which she played while helping the Washington Spirit reach the NWSL semifinals in 2014.

Defender and U.S. captain Christie Rampone will not make the trip due to a back injury, according to U.S. Soccer. A team spokesman says the injury is not serious and Rampone could be back in time for the Algarve Cup. Megan Rapinoe is also out with a knee injury.

Rampone’s absence opens the door for defender Rachel Van Hollebeke, who was not called up for World Cup qualifying in October or for the four-game tournament in Brazil in December. Van Hollebeke did participate in the January training camp in Los Angeles.

Nicole Barnhart, Ashlyn Harris and Alyssa Naeher are the three goalkeepers on the trip for the United States. Starting goalkeeper Hope Solo is currently serving a suspension following an incident during January training camp.