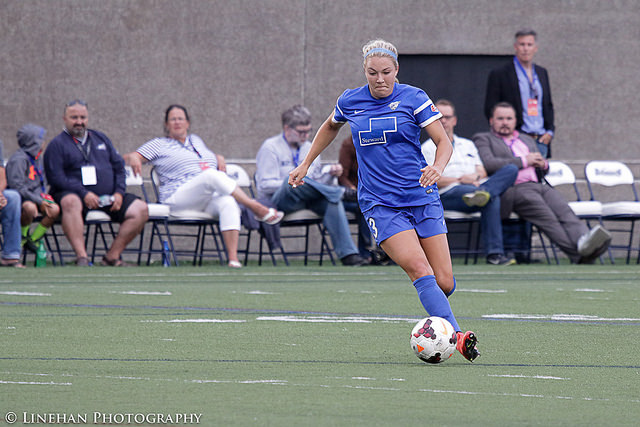 Courtney Jones decided to retire for a business opportunity she could not pass up. (Photo Copyright Clark Linehan for The Equalizer)

For two seasons Courtney Jones represented the most underappreciated and in some ways most vital demographic of NWSL players.  Jones was a versatile American who was good enough to often earn starters’ minutes, but well down the line in terms of overall notoriety and the national team.  Those players are the heartbeat of the league.  Unfortunately it comes with one very real shortcoming.

“We don’t get compensated like the men so it’s difficult to decide if you’re going to make your life out of soccer or figure out another way to make a living,” Jones said a week after announcing her retirement from soccer at age 24.  She became the second player who would have been a steady contributor to the Boston Breakers this season to hang it up short of turning 25.  Jazmine Reeves, whose rookie season included a hat trick against the Portland Thorns, retired at 22 to take a job with Amazon.

“The realities of where we are with the women’s game right now,” Breakers coach Tom Durkin said of Reeves in an interview before Jones made her announcement.

Every player walks away for different reasons.  Jones is pursuing a business opportunity that she is keeping under wraps for the time being.  She acknowledges the business world will be available to her far longer than the soccer world, but added there is some urgency in the particular venture she has committed to.

“It wasn’t anything soccer wise that made me want to retire,” Jones said, adding that she thinks the absence of competition will be the most difficult part of life after soccer.  “It wasn’t anything specific that happened.  I just came to the realization that I have a very good opportunity to go into the business world and use what I learned in college and throughout life and try to make a living and a lifestyle outside soccer.”

To illustrate the difficulty Jones had making the decision to retire, it is important to go back to September when the idea first crossed her mind.  She sought out Durkin and Breakers’ general manager Lee Billiard to discuss her soccer future.  Jones emerged from those conversations ready to throw herself headlong into the 2015 season.

“It was more of a personal conversation than a soccer conversation with both of them,” the two-time national champion at North Carolina said.  “After speaking to them I decided I was going to train and work my butt off to make sure I was ready for next season.  That was the mindset I had.”

Durkin had reminded Jones of the short-term nature of soccer versus the long-term nature of the business world.  “Soccer is here right now, you cannot play soccer later.  Business will be there forever,” Durkin told Jones.  “And I agree with him,” she said.

It was not anything about soccer, or about offseason training, that changed Jones’ mind back to the retirement option.  Instead it was the presence of the business opportunity and some conversations with her parents during the holidays.  And when Courtney Jones talks about her professional athletic career with her parents, it likely resonates different than most.  Her father, Brent Jones, played 11 seasons with the San Francisco 49ers (plus part of one season with the Steelers in which he did not play a game) and was a member of three winning Super Bowl teams.

“It is hard because he went through so much in so many years in the NFL, getting hit every single second of his life,” Courtney said of Brent.  “But he had good insight.  He left football and he started his own business (as a venture capitalist) with his football friends.  His main advice was don’t let anybody tell you when to retire.  You control you.  If you want to retire, you retire.  Don’t let anyone tell you what you should do and what you should do.  This is about you and what you want to do with the rest of your life.”

Brent Jones told his daughter that selfishly he wanted her to keep playing because he could think of nothing better than flying to Boston to watch his daughter play professional soccer.  But he also supported her decision whichever way it turned out.  Courtney said it is a tough balance for her father to flip between father and athletic mentor.

“He’s done an incredible job of mixing those two together.”

There was one other factor that contributed to Jones’ decision to retire: the national team.  “Our national team is incredible.  That’s every girl’s dream is to play for the national team.  And I just had to be realistic with myself.  If I felt like I was right there and on the verge of making it into a camp, I would have played this next season.  And it’s hard to come to that realization with yourself after having that dream of yours for so long.”

It was a surprising and refreshing bit of honesty from a player who went much farther than most but never made that final step to wear the uniform of her country.  And she was not ready to commit to playing enough more years just to see if she would advance enough to be considered ahead of a World Cup in 2019.

“For us, in the NWSL right now, it’s a hard decision,” she said, returning to the topic of salary.  “You have to give up a lot to do what we do, and it sucks to say we don’t get compensated enough.  We want this to be around for future athletes and for women who want to get that compensation.  I think the way we’re running things right now, I think eventually we will get there.  But for me personally it wasn’t happening right now so I decided to make the tough call.”

My quick take on the Solo suspension

Hope Solo finally pushed things far enough that U.S. Soccer decided to sit her down for 30 days.  The last straw was being out late with her husband, who wound up being pulled over for driving drunk with Solo in the passenger seat—of a U.S. Soccer van.  Like with her domestic-violence arrest last summer, from which the charges were recently dismissed, there is no need to jump to conclusions about how the legal process will play out.  That said it is difficult to argue against the notion that some poor judgment was used by Solo.  For her part she released a statement accepting the decision and suggesting she take some time to decompress after the whirlwind of her near court case.

U.S. Soccer boss Sunil Gulati on Monday answered in the affirmative about whether he could see a World Cup roster without Solo’s name on it.  He added that Solo has been asked to comply with certain conditions during the suspension, which will cost her friendly matches against World Cup sides France and England.  When the ban is lifted—if the ban is lifted—it will be a little more than three months until the World Cup.  My feeling is that U.S. Soccer played this extremely well, giving Solo just the right amount of time to either renew her dedication to the team both on and off the field while at the same time giving themselves a few weeks to ponder the possibility of going to Canada with Ashlyn Harris and Nicole Barnhart.  The residual effect is giving Harris and Barnhart, and maybe Alyssa Naeher, some key international minutes against quality sides.

I would still lean toward Solo being in goal when the U.S. faces Australia in the World Cup opener on June 8.  But it is abundantly clear that the team is at the very least making contingency plans for life after Hope.

— The potential return of Nadia Nadim to Sky Blue is a potential game-changer for the scoring-challenged side.  Sky Blue has done little in terms of adding goal scorers to the roster this offseason, and their 2014 campaign turned on the arrival of Nadim, who not only can score but infused the club with an energy that had been missing before she got there.  Nadim also developed a fantastic chemistry with Kelley O’Hara.

— What a difference a year makes for Seattle Reign FC.  Last offseason pretty much everything fell into place for them.  The result was an historic run to the Shield.  This winter, as they come up to a month from training camp, the Reign are facing injuries to Jess Fishlock and Megan Rapinoe as well as uncertainty surrounding Hope Solo.

— The Reign released a statement saying they would take no additional action against Hope Solo “at this time.”  But it is valid to wonder if her tenuous status with U.S. Soccer could impact her status as a subsidized player to the Reign.

— Randy Waldrum is the NWSL coach with the most, and the most recent, experience in the college game, and he is picking up most of the best pieces that were left discarded on draft day.  Chris Henderson at All White Kit has a list of where undrafted free agents will spend NWSL training camp.  Competition figures to be hot in Houston. Our Jen Gordon ranked some of the top players left out there.

— The 2015 schedule is in its final stages of approval.  We expect it to be released at some point in the near future.

Bayern beats U-20 USWNT, Gators on US tour
FMF: Mexico players out of NWSL until at least late July