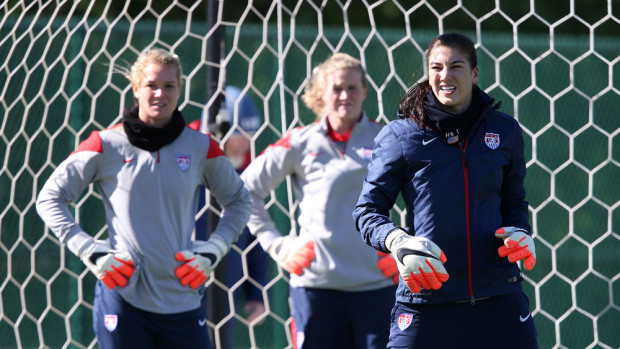 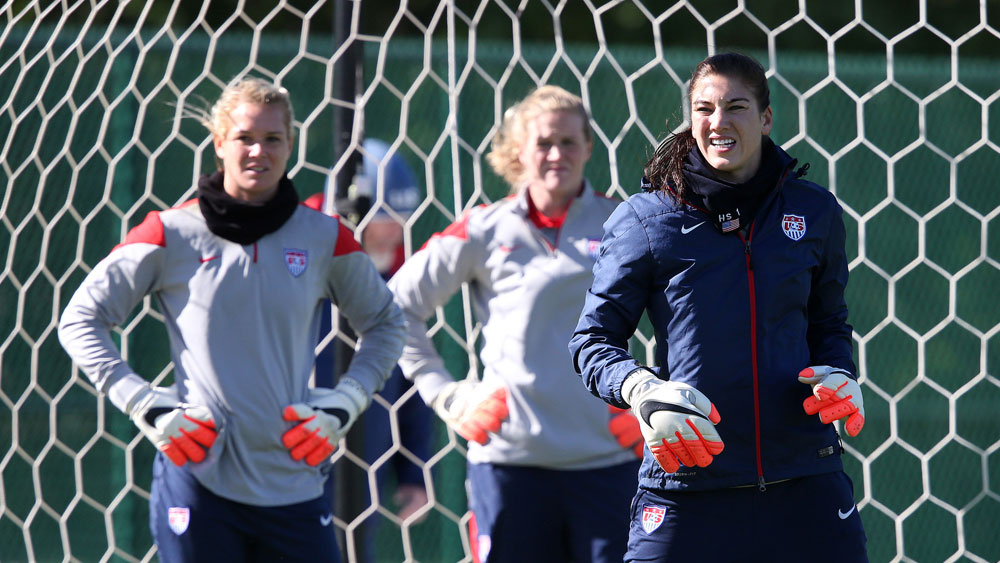 Hope Solo has played every minute of the last two Olympic Games and the last World Cup. (AP Photo)

At the very least, the United States women’s national team will be without starting goalkeeper Hope Solo for two crucial World Cup warmup matches in February. Solo was suspended by U.S. Soccer on Wednesday for 30 days following a run-in with police early Monday morning that saw her husband, Jerramy Stevens, arrested on suspicion of driving under the influence. Solo was a passenger in the car and reportedly acting “belligerent.”

Her 30-day suspension requires her to meet certain and yet unknown criteria before she can be reinstated to the team, so it’s possible that the ban will carry on even longer. U.S. coach Jill Ellis could deem that the distraction Solo brings is not worth the headache at the World Cup in Canada this summer. At this point that seems possible.

[KASSOUF on NBCSports.com: Why USSF suspended Solo this time]

Ellis will have to evaluate her options at goalkeeper during the Feb. 8 away game against France and Feb. 13 in England. Those matches are a rare chance for Ashlyn Harris, Nicole Barnhart or Alyssa Naeher to get long overdue experience in the event that one of them is in net for the United States’ quest for its first World Cup title since 1999.

Solo is a game-changing player for the U.S. team. She was named best goalkeeper at the 2011 World Cup. Ellis knows the risk she would be taking if she drops Solo. No goalkeeper other than Solo has played a single minute – all 1,770 of them – in the last two Olympics and the last World Cup combined. The last goalkeeper to play a minute for the U.S. in the Olympics or World Cup is the retired Briana Scurry in 2007, four coaches ago.

Solo’s immediate future is yet another question facing a team that, since winning its third straight Olympic gold medal in 2012, has twice changed coaches, dropped to No. 2 in the world rankings for the first time in over six years and is generally perceived as having lost its swagger that once intimidated opponents.

The samples provided by the three goalkeepers next in line come from the National Women’s Soccer League and some passing experience in international friendlies – hardly ideal for World Cup preparation. Here is what Ellis has to work with:

Nicole Barnhart – Long the USA’s No. 2, Barnhart’s nagging injuries played a part in preventing her from playing a minute for the U.S. in 2014. Her quiet personality is the antithesis of Solo’s. Barnhart is consistent and reliable, though not as agile as Solo. Barnhart has also had the one of the NWSL’s best defenses in front of her two years running.

Ashlyn Harris – A capable shot-stopper who might be the quickest of the bunch, Harris recently slid into the No. 2 spot behind Solo. Harris is capable of both the spectacular and the occasional questionable decision-making. Harris, 29, only has four caps to her name, but one is a full 90 minutes against France in a 2-2 draw last June. Harris is much more vocal than Barnhart and not afraid to speak her mind.

Alyssa Naeher – The biggest unknown on the international stage is Naeher, whose start on Dec. 18 against lowly Argentina was her first appearance for the senior U.S. team. She has played for the U.S. at the U-17, U-20 and U-23 levels. Naeher showed in her 2014 NWSL campaign that she is capable of all sorts of spectacular saves, constantly making highlights reels. But she did all that while giving up a league-worst 2.208 goals per game. How much of that was her and how much of it was Boston’s shaky defense?